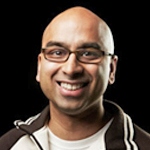 Randy Boyagoda, associate professor and chair of the English Department at Ryerson University in Toronto, will present a draft chapter of his biography of Richard John Neuhaus, a Catholic priest and prominent American public intellectual who died in 2009. The biography will be published by Random House in 2014.

His most recent novel, Beggar's Feast, received critical acclaim at home and abroad; his first novel, Governor of the Northern Province, was a 2006 nominee for the ScotiaBank Giller Prize. An academic monograph on the fiction of Salman Rushdie, Ralph Ellison, and William Faulkner, was published in 2008. He received his PhD from Boston University in 2004 and was a postdoctoral fellow at the University of Notre Dame. Since 2011, Boyagoda has served as vice president of PEN Canada.