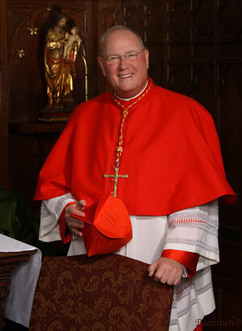 Cardinal Timothy Dolan, archbishop of New York and president of the U.S. Conference of Catholic Bishops, will be the principal speaker and the recipient of an honorary degree at the University of Notre Dame’s 168th Commencement Ceremony on May 19.

Cardinal Dolan was named archbishop of New York by Pope Benedict XVI on Feb. 23, 2009, after serving for the previous seven years as archbishop of Milwaukee. He was elected president of the U.S. Conference of Catholic Bishops on Nov. 16, 2010. Pope Benedict elevated him to cardinal on Jan. 6, 2012.

Cardinal Dolan has a doctorate in American church history from The Catholic University of America. His doctoral dissertation is on the life and ministry of the late Archbishop Edwin O’Hara, a founder of the Catholic Biblical Association.

Excerpted from the University of Notre Dame Commencement website.