Outsider at the Vatican: Frederick Franck's Drawings from the Second Vatican Council is an exhibit sponsored by the Cushwa Center for the Study of American Catholicism and the Notre Dame Center for Arts and Culture featuring works on paper from Pacem in Terris: The Frederick Franck Museum and the Catholic Documentation Center, Radboud University Nijmegen.
August 2-September 30, 2015
Notre Dame Center for Arts and Culture
1045 W. Washington St., South Bend
Opening hours: T-F 9:00 a.m-5:00 p.m., Sunday 12:00-4:00 p.m.
Reception & Gallery Talk, 5:00-7:30 p.m. September 9, 2015
Frederick Franck (1909-2006) was born in Holland. Although raised an agnostic, he was profoundly interested in human spirituality, becoming a devotee of Pope John XXIII and a lifelong student of Zen Buddhism. Franck was a prolific writer and artist, publishing more than 30 books of reflections and drawings and creating thousands of original works, some of
which are in major museum collections including the Museum of Modern Art and the Whitney Museum. Deeply moved by news of the Second Vatican Council, Franck decided to return to Europe. He attended all four Council sessions, sketchbook and pen in hand, and produced around 300 drawings, primarily in pen and ink, supplemented by watercolor. 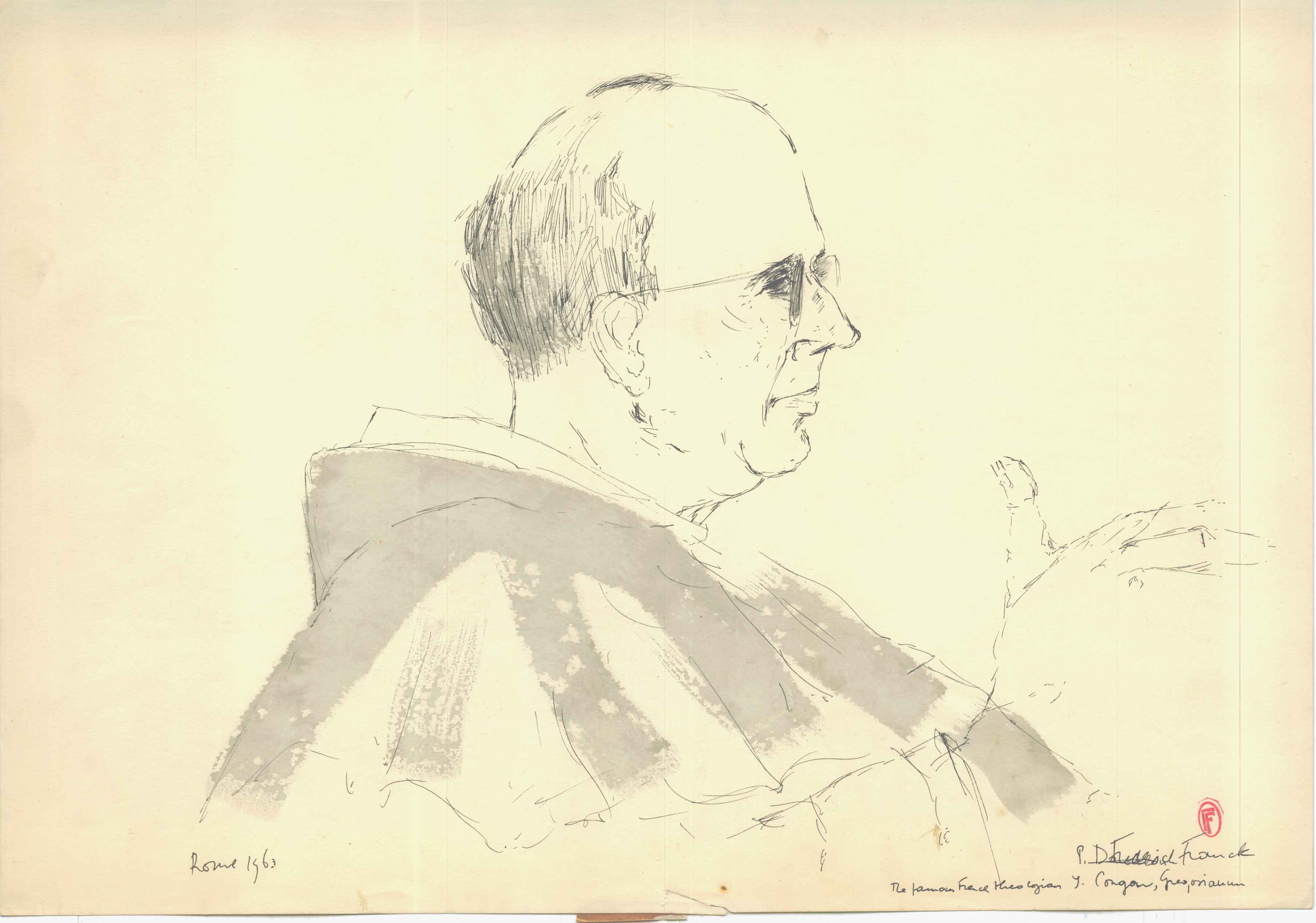 Franck's subjects, sketched from life, include portraits of most of the major Council dignitaries (John XXIII, Paul VI, cardinals, bishops from around the world, theologians, and ecumenical observers) as well as representative scenes of life at the Council. Franck's work, more intimate than any photographs, is an invaluable record of the emotional experience of the Council.
The University of Notre Dame will host approximately 60 of these drawings during August and September 2015. This exhibit, featuring works loaned by Pacem in Terris, the museum in Warwick, NY, devoted to Franck's memory, and the Unversity of Nijmegen, which received a major donation of drawings from Franck several years before his death, represents a unique opportunity to see selections from both collections. On the 50th anniversary of the conclusion of Vatican II, this exhibit will honor the memory of those critical years in Rome.
Co-sponsors of this exhibit include:
Nanovic Institute for European Studies
Institute for Scholarship in the Liberal Arts
Office of the President
Hesburgh Libraries
Institute for Church Life
Notre Dame Center for Liturgy
The Notre Dame Forum