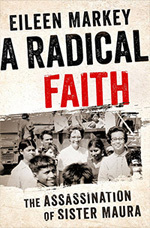 Eileen Markey will discuss the subject of her new book, A Radical Faith: The Assassination of Sister Maura (Nation Books, 2016).

For details and registration: kellogg.nd.edu/lanacc

From the publisher: In December 1980, four American women—three of them Catholic nuns—were murdered by members of the U.S.-trained military of El Salvador. The news shocked the American public and set off a decade of debate over Cold War policy in Latin America. The women themselves became symbols and martyrs, shorn of context and background. Markey breathes life back into one of them, Sister Maura Clarke. Raised in a tight-knit Irish immigrant community in Queens, New York, during World War II, Maura became a missionary and by the 1970s was organizing and marching for liberation alongside the poor of Nicaragua and El Salvador. Maura’s story offers a window into the evolution of postwar Catholicism: from an inward-looking, protective institution to a community grappling with life in a shockingly violent world.

Markey is an investigative journalist whose work has appeared in the New York Times, New York Magazine, Wall Street Journal, National Catholic Reporter, America, and Commonweal. She is a contributing editor for Housing and Homelessness at City Limits. Markey graduated from Fordham University and the Graduate School of Journalism at Columbia University.

This event is sponsored by Latin American/North American Church Concerns (LANACC) and cosponsored by the Cushwa Center for the Study of American Catholicism.