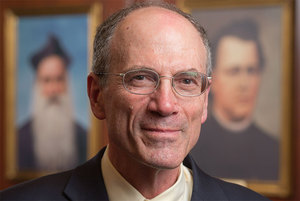 Taking place March 22–24, 2018, at Notre Dame's McKenna Hall, Enduring Trends and New Directions honors the career of Mark Noll by reflecting on his work in the history of American Christianity, while also looking forward to new directions in the field. Panels on American Christianity in the colonial era, the 19th and 20th centuries, and the recent history of world Christianity anchor the conference. Senior scholars will gather in roundtable discussions to reflect on the evangelical mind and on the writing of grand narratives in American religious history. The conference features an interview with Noll hosted by John Wilson along with Noll's own reflections.

The conference concludes with the Cushwa Center for the Study of American Catholicism's Seminar in American Religion, which will feature Judith Weisenfeld's New World A-Coming: Black Religion and Racial Identity during the Great Migration (NYU Press, 2017).

Complete conference details and registration are available at nollconference.com.