Ulrich is the 300th Anniversary University Professor in the Department of History at Harvard University, well-known for her studies of early New England women’s history, including her Pulitzer Prize winning book, A Midwife’s Tale: The Life of Martha Ballard Based on Her Diary, 1785–1812 (1990). Ulrich is also popularly known for having coined the now famous saying, “well-behaved women seldom make history.” The sentence first appeared in one of Ulrich’s earliest scholarly articles in 1976. It became the title of her fifth book, published in 2007.

Close to sixty people gathered at the Saturday morning seminar to hear from Ulrich as well as fellow panelists Patrick Mason and Linda Przybyszewski. Mason is the Howard W. Hunter Chair of Mormon Studies and dean of the School of Arts and Humanities at Claremont Graduate University. Przybyszewski is associate professor of history at Notre Dame.

A House Full of Females exemplifies the “New Mormon History.” Beginning at mid-century with Juniata Brooks’ The Mountain Meadows Massacre (Stanford, 1950), the “New Mormon History” expanded the study of the Latter-Day Saints (LDS) beyond a more parochial, defensive posture. The new approach sought to abide by strict academic standards, examined the stories of women and families, welcomed the contributions of non-LDS historians, and produced scholars (such as Ulrich, Jan Shipps, and Richard Lyman Bushman) who by any measure fall within the first rank of American historians. In Mason’s words, the movement “modernized, de-polemicized, and in many ways secularized the study of Mormonism.” A House Full of Females, which uses LDS experiences to speak to topics like gender and sexuality, will continue to help Mormon history find its way into the mainstream of U.S. history. 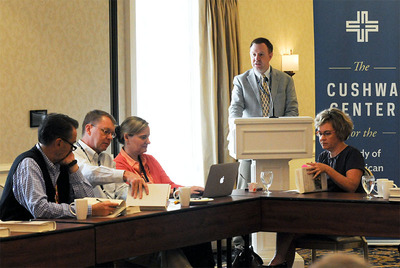 Mason began the morning’s program. Adapting language Jan Shipps had used to praise Richard Bushman’s Joseph Smith, Rough Stone Rolling (2005), Mason declared that A House Full of Females is “the crowning achievement of the lived history of early Mormonism.” He lauded Ulrich’s reading of her sources—what he called her ability to turn “known and seemingly ordinary materials into gold.” Indeed, Mason maintained, Ulrich’s book does not necessarily seek to “destabilize established historical narratives as much as it infuses those historical narratives with extraordinary depth and texture” (words like “texture” and “granularity” recurred in seminar participants’ comments on Ulrich’s historiographical contribution). Mason also focused on the issue of polygamy, and said that Ulrich’s book complemented Kathryn Daynes’s More Wives Than One: Transformation of the Mormon Marriage System, 1840-1910 (2001) by showing “how polygamy actually worked on the ground.” He critiqued the book for not speaking at all about the origins of Mormonism and for speeding through the 1860s to the book’s terminus in 1870. Despite these criticisms, he concluded by praising A House Full of Females as “a remarkable book that will be valued for many years to come.” 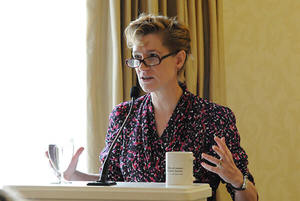 Przybyszewski began her commentary by focusing on the Mormon diaries that were Ulrich’s primary source base, and drawing attention to LDS leader Wilford Woodruff’s refusal to talk about plural marriage in his daily journal. She wondered about “sins of omission” in diaries and what groups comprised Woodruff’s audience. A legal historian, Przybyszewski also considered the “women’s rights” mentioned in the book’s subtitle. She described the standard marriage “deal” available to women in the 19th century, whereby men earned a living and a public reputation while women bore children and cared for the home. The trouble with this common arrangement, Przybyszewski said, was that women rarely had other choices available. She raised the question of what “women’s rights” meant for figures like Emma Smith, Joseph Smith’s first wife, who refused to conform to plural marriage and obtained a divorce. Finally, Przybyszewski placed A House Full of Females in comparative context with other work on 19th-century women by historians such as Christine Heyrman, Nancy Isenberg, and Stephanie McCurry.

Ulrich then responded to Mason and Przybyszewski. She agreed with Mason that the last chapter moved rather rapidly, but defended herself on the grounds that her sources began to fade during that period. She explained her refusal to write a “volume two” that would extend the story through 1890, saying she would leave that task to others. Ulrich also took up the question of the book’s title and subtitle, saying that her main concern was not women’s rights in the national picture, but rather the intersection of women’s lives, family arrangements, and the establishment of a church community by and for women. In the face of hardship and persecution, she maintained, LDS women stood up for their rights within the church by standing up for their rights as Mormons. She concluded by expressing the desire that other historians would use other sources and perspectives to build on her work.

As usual, over a dozen lively and perceptive questions followed the panelists’ initial remarks. Eric Hamilton (Indiana University–Purdue University Indianapolis) asked about Ulrich’s research and writing journey, wondering what the highlights or turning points were for her. Ulrich immediately referenced Wilford Woodruff’s diary, noting that she “adore[d]” the length and details of the journal. Even more dramatic, however, was her discovery of the diary kept by Woodruff’s mother, which was “hidden in an account book.” As far as Ulrich was aware, no one had ever used that source before. She also mentioned the emotional encounter with sources relating to the Mormons’ tragic Iowa crossing in 1846, where many lost their lives; some of Ulrich’s own ancestors, she revealed, took part in that journey.

Laurie Maffly-Kipp of the Danforth Center on Religion and Politics at Washington University in St. Louis wondered why Ulrich did not address the question of why people initially joined the LDS church at its founding. Ulrich responded that earlier sources were available to answer that question and that her book began in the 1830s with Woodruff’s diary. However she made clear that the primary reason people joined the original Mormon community was that they believed it was “the restoration of God’s authority on earth.” This confidence in the truth of Mormonism, she explained, was also what led people to accept polygamy.

John McGreevy, dean of the College of Arts and Letters at Notre Dame, asked Mason and Ulrich about where the field should go—“what is the high-stakes book that needs to be written in Mormon history?” Mason offered the theme of “globalization” as one that must be developed more while lamenting that “for the most part” Mormon history seemed “a generation behind” compared to other fields. For her part, Ulrich maintained that polygamy itself still presented opportunities for future research, especially as it intersected with the study of sexuality, legal history, the family, and other issues. While many women left Mormonism over plural marriage, Ulrich reminded the audience, “women without question helped to create the system.”

Mary Cayton (Ohio State) wondered how young Mormon men felt about the practice of polygamy, since the system seemingly advantaged older, wealthier men. In a related question, Barbara R. Walters (City University of New York) wanted to know about sex ratios and the effect they would have had on plural marriage. Ulrich’s responses pointed out that the practice of polygamy ebbed and flowed throughout early Mormonism while Mason interjected that Cayton’s question brought up the oft-debated puzzle about whether or not polygamy would have died of its own accord if not officially prohibited in 1890. Both Mason and Ulrich seemed to think that it would have. But Mason drew on his own research to explain that, in some areas at least, women made up the majority of converts, a fact that “[made] the system possible, at least for a while.” Ulrich stated that Utah specifically enjoyed relatively well-balanced sex ratios.

Andrew Mach (Notre Dame) raised the question of how Mormons “[became] American.” In answering this question, the panelists soon turned to the usefulness of Mormon sources for broader American history. Ulrich pointed to rich details contained in the Woodruff diary as quite illuminating for mid-19th-century American historians interested in a wide variety of topics. Mason said that Mormons were central to answering new questions in political history, such as how the United States engaged in state-building in the late 19th century.

In the foreword to the second edition of New Perspectives in Mormon Studies: Creating and Crossing Boundaries (Oklahoma, 2013), Jan Shipps stressed the benefits of interdisciplinary methods in the study of Mormonism. “A willingness to study the methods of more than a single discipline,” she wrote, could help outsiders cross the boundaries into Mormon studies (xii). A House Full of Females, by contrast, remains a work deeply rooted in historical methods. Ulrich herself stated during the seminar that she resisted the urge to make “grand pronouncements” about women’s experiences, doggedly focusing instead on the lives of ordinary people. While this approach has benefits and drawbacks, it works to great success for the author of A House Full of Females. As Mason put it, “historical sources have rarely had it so good as to be placed in the hands of Laurel Thatcher Ulrich.”

Benjamin Wetzel is a postdoctoral fellow at the Cushwa Center. He specializes in American religious, political, and intellectual history in the period from 1860 to 1920.