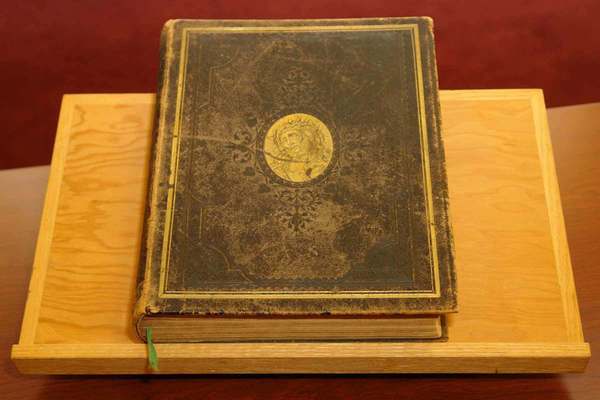 Recently the Hesburgh Libraries received a doubly holy gift: a book about saints presented by St. André Bessette, CSC, to a friend more than a century ago.

The book, Legende von den lieben Heiligen Gottes (“Legends of the Dear Saints of God”) written by Georg Ott and published in 1891 by Friedrich Pustet, was donated by Thomas and Carol Schafer of Grand Ledge, Michigan, and their daughter Joan Stembaugh of Rockford, Michigan. Bessette had given it to Thomas Schafer’s grandmother, Anna Schumacher Schneider of Hamtramack, Michigan, in 1895. 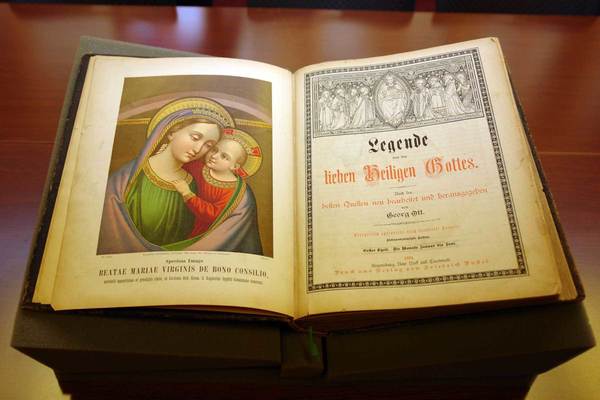 “My grandmother’s family knew Brother André well,” said Schafer, whose grandmother was one of 12 children. “In later years my grandmother often told of the times Brother André stayed with them while visiting a brother who was missioned at a chapel near Mt. Elliot Highway in Detroit.”

Schafer remembers his grandmother’s older sister Elizabeth and Elizabeth’s daughter Antoinette—who, after a career as an executive secretary at Cadillac, became a nun and cared for the sick and elderly—also speaking about Brother André, his work, and their friendship.

On Oct. 17, 2010 Brother André was canonized as Saint André of Montreal. Bessette, a lay brother of the Congregation of the Holy Cross who died in 1937 at the age of 91, is the order’s first canonized saint. As a young adult he spent a short time working in the textile mills of the United States before returning to his native Canada and joining Holy Cross in 1870. His first assignment was as the doorman of Notre Dame College, the community’s school in Montreal. He remained there for 40 years. According to the congregation’s website, “St. André’s strong faith and devotion eventually led to the building St. Joseph’s Oratory—Canada’s largest church.” 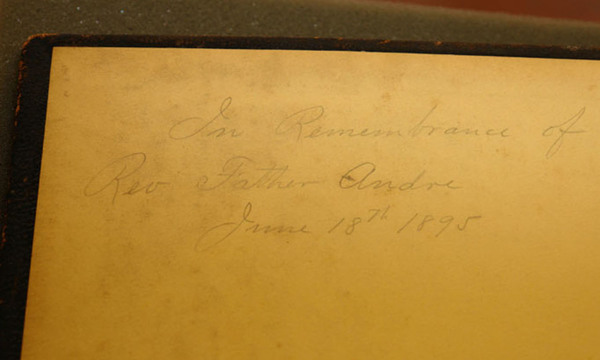 Schafer inherited his grandmother’s book after his mother’s death in 1987. Having come from the hand of now-Saint Brother André, the book is a relic. Schafer had considered returning it to St. Joseph’s Oratory in Montreal, but during a trip to the University of Notre Dame to visit his granddaughter, student Alexandra Stembaugh, he saw the statue of Brother André by Rev. Anthony Lauck, CSC in the Basilica of the Sacred Heart. “It occurred to me that perhaps [Notre Dame] would like to have it.” The Schafers, along with their daughter Joan and her family, presented the book to Lou Jordan and Aedin Clements in the Department of Rare Books and Special Collections on March 8. 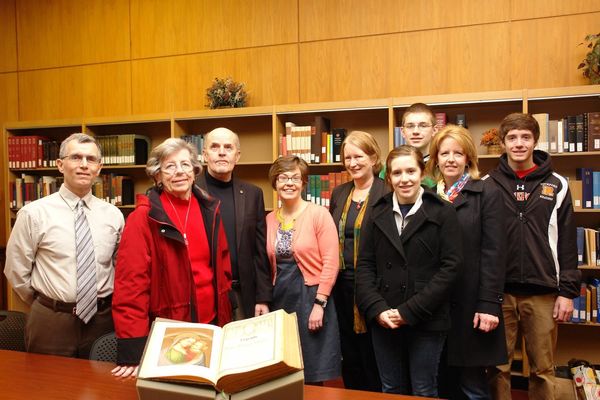 Cushwa Center director Kathleen Sprows Cummings also met with the Schafers and the Stembaughs to hear the history behind the family’s gift. Cummings, whose personal and professional interest in St. André was shaped in part by her 2009 pilgrimage to St. Joseph’s Oratory, also attended St. André’s canonization in Rome. She wrote about Bessette and his canonization in a Notre Dame Magazine article, and she is currently at work on a book about American saints. Her students have examined Legende von den lieben Heiligen Gottes during library research sessions.

“I guess my grandmother would be pleased,” said Schafer, “and so would Brother André.”