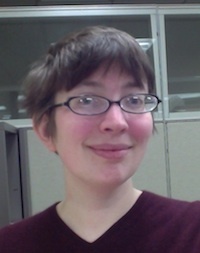 Catherine Osborne is the Cushwa Center's postdoctoral fellow for 2014-2015. Osborne, who earned her PhD in theology at Fordam University and taught last year at Franklin and Marshall College, is the first person to hold this new position. She's been hard at work since she arrived in August, and she recently filled us in on what she's been doing.

What projects are you working on this year?
My time is divided between my own writing projects and several ongoing projects for the Cushwa Center. I'm writing a book to be titled American Catholics and the Church of Tomorrow, which deals with Catholic interest in the future in the decades surrounding the Second Vatican Council, and especially with interest in possible changes to church architecture. As Catholics tried to envision a new kind of church for the future, they simultaneously envisioned a new kind of liturgical space -- whether that meant new technologies in church architecture or spaces that weren't "churches" in a classic sense at all. Right now, I'm also working on a couple of articles: one on how secular architectural magazines in the 1950s and 1960s covered the revolution in church architecture, and one on attempts to build spaces suitable for ecumenical worship.

For Cushwa, I've got a number of projects ongoing; first and foremost, I'm the administrator for the Conference on the History of Women Religious (HWR) this year, and I've been working on the newsletter and websites. I'm working on an exhibition of drawings by the artist Frederick Franck that we hope will come to South Bend in the fall of 2015, and I'll also be teaching in the department of American Studies in the spring of 2015.

What can members of the ACHA expect at the Spring 2015 meeting?
I'm really looking forward to the ACHA spring meeting this year. We have a very exciting plenary speaker, Dr. Michael Hochgeschwender, professor of North American Cultural History, Empirical Cultural Research, and Cultural Anthropology at the Ludwig-Maximilians-Universität in Munich, who will be helping us commemorate the 150th anniversary of the end of the Civil War. And in addition to what I hope will be an exciting slate of panels (submit your paper proposal now!), we are planning a tour of Catholic sites in South Bend, where we'll discuss ways of using local sites as part of our classroom teaching.

What are some new developments with HWR?
The HWR has done fantastic work for years now in raising awareness of the importance of the history of women religious. It's currently going through a transitional administrative phase and is housed for the time being at the Cushwa Center. That means there are a lot of things in the works, and I'll have an update in the Spring 2015 newsletter on many of them. Right now, we're launching plans for the tenth Triennial Conference, which will be held in June 2016 at Santa Clara University. The Triennial Conference is our signature event, and we hope to see you all there! But we are also currently revamping the website to bring it more up to date, and have launched two social media accounts. You can find us on Facebook and on Twitter, where our handle is @CHWRscholars. Stay tuned for more updates on the digital future of the HWR.

How is the "Nun in the World" Symposium shaping up?
This is one of the things I've most been looking forward to since accepting this position! We have a wonderful slate of papers by scholars from all over the world -- while many are from North America and Great Britain, we will also have speakers from Australia, Nigeria, France, Italy, and elsewhere--and a beautiful location in Notre Dame's London Centre, right on Trafalgar Square. If you can't join us in person, look for updates on the HWR social media sites and for a full recap in the Fall 2016 newsletter.

How is life in South Bend?
I did a lot of my dissertation research in South Bend, which is one of the many reasons I was so happy to sign up for some additional time at Cushwa. After a decade in New York, I appreciate the somewhat slower pace and close-knit community life; it's nice to run into people you recognize at the farmer's market on Saturday mornings. I spent a lot of time this summer biking along the river, although I'll probably have to shut that down for the winter soon! I've also been spending time, and making friends, at the South Bend Catholic Worker and at the parish I've joined, St. Augustine's.