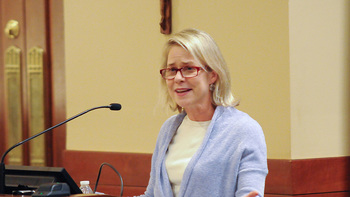 There is perhaps no more contentious a topic in American culture than the intersection of sex, gender, religion, and politics. R. Marie Griffith contends that we’ve not yet fully come to terms with the ways that sex, gender, and religion have fractured American society since the 1920s. While other contemporary issues have also gained traction and caused polarization, none has captivated Americans to the same degree as sexual politics. The historian, Griffith says, must ask why this is the case.

Griffith opened her talk by referencing the June 2015 Supreme Court decision in Obergefell v. Hodges that established equal rights to civil marriage for same-sex couples. At the time, many conservative religious leaders condemned the court’s decision, while progressive religious leaders heralded the decision as a new dawn for equal rights. Anger over the decision remains between progressive and conservative Christians. These conflicts stem from a longer culture war over sexuality. Such conflicts, Griffith said, are heightened by the entrenched notion that Christian values ought to shape American politics and values.

The breakdown in consensus about sexuality and gender roles, Griffith argued, began in the early 20th century. Up to that point, Americans largely agreed to a sexual order in which men served as heads of households, women submitted to their husbands, and monogamous, heterosexual marriage was the only sanctionable form of marriage. That changed in 1920, when women won the right to vote in all state and federal elections.

The push for women’s suffrage “prompted a crisis in American Christianity,” Griffith said. Those who opposed women’s suffrage claimed that it would threaten women’s roles as mothers, possibly harm their reproductive organs, and diminish their desire for families. While opposition could be found among both men and women, the greatest hostility came from the Jim Crow South, where many feared that black women would also gain the right to vote. The battle over suffrage unleashed new arguments about motherhood, sex, and women’s roles in the family and society. Anti-suffrage activists framed these debates as an attack on religious rights.

The clashes over suffrage, Griffith explained, shifted debates about gender roles and sex to the center of American politics and split American Christians. Griffith offered three well-documented examples of how disputes about sex have divided American Christians since the 1920s: controversy over birth control in the 1920s and 1930s, the battle over sex education in public schools in the 1960s, and most recently, the highly polarized debates over sexual harassment.

The birth control movement began in 19th-century New York, but the suffrage movement helped it to gain “some notion of acceptability by 1920s.” By the early 1930s, the Christian consensus on sex had fractured. Ecumenical Protestants began to advocate for contraception in the context of marriage as morally acceptable and “in harmony with American liberty.” Advocacy for birth control was led, most famously, by Margaret Sanger. Sanger was “galvanized” by her early public health work in New York as a midwife and nurse, Griffith noted. Sanger used coalitions to build broad support for the movement, especially with liberal Protestant clergy. Soon, leading publications throughout the country, including Harper’s Weekly, began publishing sympathetic pieces that discussed birth control as a scientific revolution. The movement faced formidable opposition, most notably from Catholic leaders such as John Ryan. Ryan and other like-minded leaders argued against birth control as a violation of moral law. Ryan, a noted advocate for social justice and a living wage, believed that birth control would overturn the divine order. In response, Sanger appealed to American anti-Catholicism against those who opposed birth control. At stake, both sides believed, were issues such as women’s rights, eugenics, immigration politics, and ideas about human liberty and freedom.

The tensions that shaped debates about birth control in the 1930s exploded in the 1960s, when a number of public schools began implementing sexual education programs. By the early 1960s, a number of Protestant groups began working to produce sex ed curricula for teens and youth. These efforts were part of larger concerns in American culture about the sexual revolution. Betty Friedan’s The Feminine Mystique and Hugh Hefner’s Playboy Magazine were just two of numerous publications that upended ideas about sex and accelerated changes in the wider American culture. The effort to respond to the sexual revolution led many liberal Protestants to support better sex education, but it also deepened disagreements over where that education should take place and what it should look like.

Many agreed that public schools ought to play a role in this effort. They believed that schools had the means to impart information that would help prepare youth and teens to make informed decisions. Others saw public education sex ed as displacing the educational roles and rights of families. The Sex Information and Educational Council of the United States (SIECUS) made significant inroads in establishing sex education programs in public schools. The organization’s founder, Mary Calderone, believed that sex ed should be used to strengthen family relationships and stable, monogamous relationships. Calderone and her supporters wanted kids to know about the consequences of “acting heedlessly on desires.” The embrace of sex ed at the local level happened very quickly, and by 1965 more than half of the nation’s school districts had a sex ed program. Not everyone readily accepted sex ed in public schools. Two groups, the John Birch Society and Christian Crusades, protested sex ed across local communities. They demonized Calderone as a danger to the family and the nation.

The highly-charged debate over sex ed in public schools served as a prelude to a “major issue splitting the nation today,” the handling of sexual harassment allegations. 2015 and 2016 saw revelations of sexual harassment allegations against several politicians. Many hoped that this would be a moment of reckoning. Griffith suggested that in fact, the moment is less novel than many would believe. “We have been here before,” she said, and have found that “efforts to address or end sexual harassment and sexual violence are overtaken by partisanism.” She pointed to two examples: Anita Hill’s allegations of sexual harassment against Clarence Thomas in 1991, and Paula Jones’ 1993 lawsuit claiming sexual harassment and exploitation by then-Governor Bill Clinton. In each case, Griffith pointed out, Americans broke down along partisan lines in their support of women with “actionable cases against powerful men.” The same was true among American Christians. Conservative Christians overwhelmingly condemned Anita Hill, while supporting Paula Jones, and progressive Christians tended to support Hill while condemning Jones.

The discussion that followed Griffith’s lecture included questions from Notre Dame faculty and various members of the local community. Audience members raised questions about the centrality of women’s suffrage to Griffith’s findings and the impact of 1920s activism on American sexual politics.

Griffith’s scholarship and lecture reflect the increasing interest in understanding the origins of conflicts that continue to divide Americans. Controversies regarding sex are hardly resolved, Griffith explained. A century on, the nation’s clashes over sexual politics and gender are as real as ever. To move forward, Griffith concluded, we must “reckon with our own deepest fears and attitudes about race, gender, and sexuality.”

Maggie Elmore is a postdoctoral research associate at the Cushwa Center.