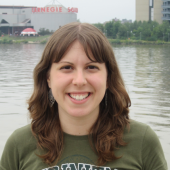 Michelle Granshaw is in her first year on the theatre arts faculty at the University of Pittsburgh. She is one of two recipients of the Hibernian Research Award this year, and she recently explained to us what the hibernicon is and gave us an update on her book project.

1. Your project is titled The Politics of Irish Diasporic Performances: Entertainment and Community in Urban America. Give us some details.

My book manuscript considers how 19th-century Irish communities in America used performance to bridge gaps between social institutions and more fluid forms of popular culture to sustain their communities. I'm approaching 19th-century popular performance through a microhistory of the hibernicon, an Irish-American variety show phenomenon.

2. Exactly what is the hibernicon? Where did you first encounter it, and why is it important?

While reading newspapers on microfilm for another project, I kept running across the term hibernicon, and writers discussed it as an important and popular entertainment form. However, there was little about it in theatre and Irish scholarship. When it was mentioned, there was disagreement about what exactly characterized the performances. As I began digging into the history of the hibernicon, I realized that there was more to the story than a lost performance form; it also was a revealing site for investigating entertainment and Irish community in the 19th century.

The hibernicon combined a moving panorama, lecture, musical numbers, and comic sketches to depict a return trip to Ireland for an Irish, Irish-American, or American tourist. Beginning in New York, the tourists board a ship, cross the Atlantic, and land in Ireland. In Dublin, they meet a tour guide and driver, typically named Barney, who they hire to take them around the country. The group then proceeds to tour Ireland’s key historical, political, and religious sites and scenes, which are depicted on the moving panorama and developed through comic sketches featuring the local tour guide and his friends. At the end of their visit, the tourists once again board their ship to return to America.

After the hibernicon’s debut in 1860, dozens of imitators in America and abroad copied the original company and contributed to the hibernicon’s popularity until the turn of the 20th century. For over 40 years, hibernicons were performed in minstrel and variety houses as well as Catholic Church halls and basements throughout the country. As a result of its longevity and international reach, the hibernicon provides an ideal case study for exploring ideas of diasporic community and how commercial popular entertainments interacted with Irish communities.

3. How was the hibernicon tied to parish life?

During their tours, hibernicon companies frequently performed benefit shows to help local Catholic parishes raise funds for a new church building, church repairs, or a school. Through an exploration of parish and church fair records, one chapter in my book will examine the extent of this relationship.

The yearly parish financial reports and church fair accounts present a picture of how frequently these performances occurred and exactly how they contributed to parish funds. Church fairs were incredibly successful fundraisers for parishes in the late 19th century, and these records allow for an analysis of how popular performance strategies contributed to their success.

4. Where have you conducted your research so far? What have you found?

Over the summer I conducted research at the Archdiocese of New York archives in Yonkers, New York. I looked at parish and church fair records as well as the diary of Father Richard Burtsell.

I was originally interested in examining Burtsell’s diary because he arranged for several hibernicon benefit nights while fundraising for his parish, the Church of the Epiphany. In contrast to newspaper accounts, his diary highlights how the hibernicon performances were not uncontested by members of the Irish community. Burtsell’s accounts illustrate the complicated relationship and negotiation between hibernicon companies and local communities. Although some protested the stage Irish representations as indecent, Burtsell defends their educational content and their popularity with his Irish parishioners.

5. Have you discovered any surprises in your research?

Actually, Burtsell’s diary is a resource for my project in more ways than I expected. Although official church policy discouraged priests from attending the theatre, Burtsell was a frequent theatergoer and he often wrote long entries reviewing performances. The diary, which he kept from the 1860s to the 1910s, presents a portrait of Catholic interaction with the theatre that is not addressed in depth by theatre historians. I’m currently writing an article on Father Richard Burtsell and theatre in New York that I intended to submit to a journal by the end of the year, and I look forward to examining this further in future projects.

Archives of the Archdiocese of New York