After installing the exhbit last week at the Notre Dame Center for Arts and Culture, Catherine Osborne answered our questions about Frederick Franck, his art from Vatican II, and how it can help inform our understanding of the Council.

How did this exhibit come to be? 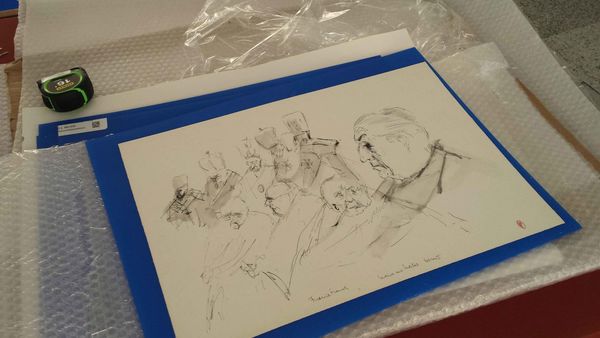 About 10 years ago, I was flipping through folders of images in the Notre Dame archives when I ran across some really arresting prints—ones that Frederick Franck had sent to a magazine editor for possible publication. I thought they were really cool, and would make a great exhibit, but I wasn’t in a position to make that happen until now. The collective resources of a number of Notre Dame departments made it financially possible, and the 50th anniversary of the closing of the Council made it good timing.

What’s Franck’s story? How did a dentist/artist living in New York end up attending all the sessions of Vatican II?

Franck always wanted to be an artist, but for practical reasons he got professional training as a dental surgeon, and he practiced as a dentist until the early 1960s—just about the time he went to Vatican II. He spent three years in Africa with Albert Schweitzer, setting up a dental clinic in what was then Gabon, and while he was there he spent a lot of time drawing and started to publish books. At just about the time the Council opened, he was back in New York and transitioning from art as a hobby to art as a career.

Like a lot of people, he was pretty depressed about world affairs in the early ’60s—the Cold War, mostly—and when he read John XXIII’s opening speech to the Council, which spoke of hope, he was inspired. He really felt compelled to go and witness the Council—he called himself “the most unofficial observer”—but he headed off to Rome without much of a plan, other than a contact with a distant relative of his wife’s, who had become a bishop in Indonesia.

His first few days in Rome were discouraging, since the Council’s sessions weren’t public and he didn’t know anyone there. But Bishop Klooster turned out to be a fortunate connection; he set up portrait sessions with half a dozen other bishops. (He told them Franck was a famous artist from America, “so they said okay.”) Gradually, Franck began to meet others who were interested in his project and wanted to help.

As a non-Catholic, he was fascinated by the drama of the Council, its ups and downs, and he ended up feeling compelled to be there for the next three sessions as well, as he got to know many of the delegates. He also returned for John XXIII’s funeral and the conclave in 1963, in between the first and second session.

How would you characterize Franck’s Vatican II images? How do they compare to his other art? 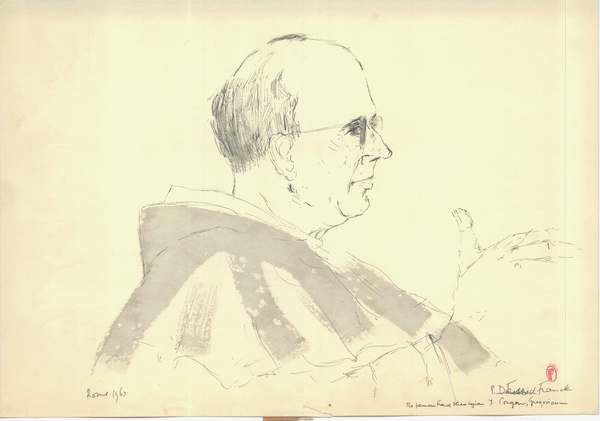 He had great drawing skills; he worked fast, and the sketches he captured in ink or sometimes pencil have a huge amount of energy. He did work many of them over later, enhancing them with ink washes and sometimes color, but they retain a strong sense of being in the moment. I sometimes compare him to a court reporter, but he was definitely a highly opinionated one; it’s usually easy to tell whether he liked someone or not!

Franck had a great sense of humor and some of the drawings are very funny, while others are quite moving. He definitely enjoyed the dozens of ways to portray eyebrows and noses and receding chins. The Vatican II drawings are rather different than much of the art he made later on. He was very interested in Buddhism, and a lot of his later work is more abstract and meditative.

What kind of insight or understanding do you think his images provide into Vatican II? 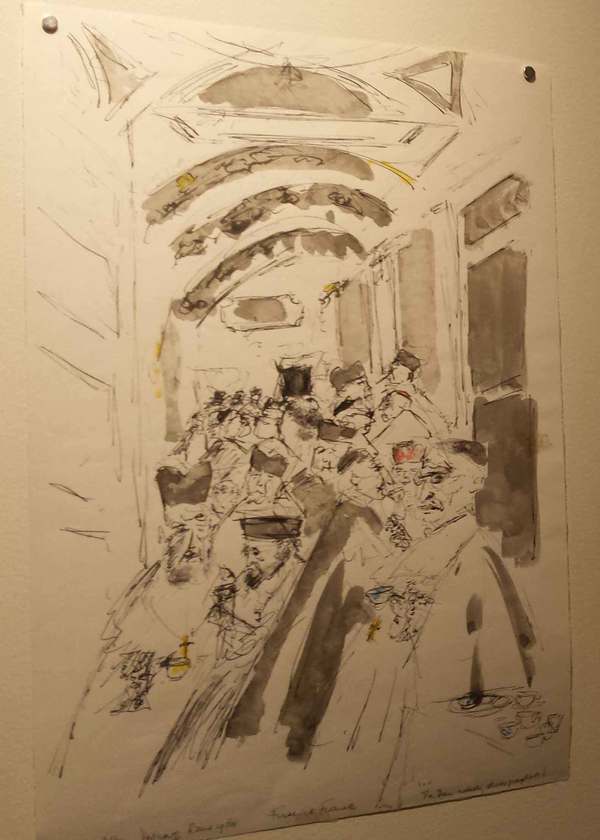 I keep coming back to the words “intimate” and “emotional experience” to describe these. In recent years several delegates’ Council journals have been published, and these drawings are like those journals in the sense that we can learn a lot about the Council from them, but in a very personal, fragmentary way. It’s not like reading a history book that draws on multiple sources and tries to assemble a more impartial picture. Franck was a non-Catholic, a partisan of the “progressive” party at the Council, and of course there was a fair amount of serendipity in terms of which moments and people he could draw. These conditions shaped his work. But keeping that in mind, they are a wonderful source. They really convey the excitement of the Council, when so many theologians whose ideas had been suppressed were suddenly important figures in reform, and the world’s bishops were becoming aware of their own power as compared to the Curia. But they also show the venality and pettiness of many of the participants, and the heavy weight of Vatican ceremonial dating to Renaissance-era court practices, which Franck and others feared, accurately, would be hard to overcome.

Do you have a favorite image?

It’s a little bit of inside baseball, but I love the drawing he made of one of the coffee bars that were set up in the side aisles of St. Peter’s. They were really important spaces for the Council —lots of gossip exchanged and lots of strategizing—but photographers weren’t allowed, so they were also quite private. The drawing is witty, but also shows off his skill at architectural rendering, and it’s of a hidden space, so that’s fun too.

What makes this exhibit special?

During the 1960s these drawings were pretty well known. There was a touring exhibit while the Council was still going on, and it stopped at Notre Dame—it was exhibited at the Snite in 1963. Various images turned up as magazine and newspaper illustrations. St. Louis Abbey, which owned a big group of drawings, put out a book, and Franck also published a book on his experiences. And obviously he was a familiar figure to those who actually attended the Council. 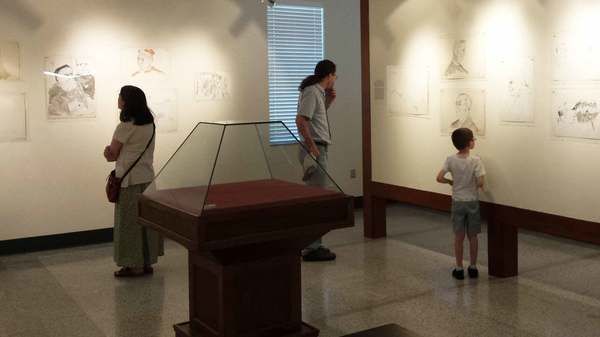 But 50 years on, Catholics in general seem to have forgotten him as an artist. I’ve talked to very few people who’ve heard of him, including experts on the history of Vatican II. Part of the problem is that the drawings haven’t been exhibited in a long time. He sold many of them to St. Louis Abbey, which isn’t a museum; gave many more to the Catholic Documentation Centre of the University of Nijmegen, which is an archive, not an exhibition space; and then the rest are at Pacem in Terris, his old home which is now a museum, but they haven’t been on display there as the museum concentrates on his later work. So as far as I know, this is the first time most of these have been on public display in decades.

--------
The exhibit is free and open to the public Tuesdays-Fridays 9 a.m. to 5 p.m., and Sundays from noon to 4 p.m. It runs through September 30 in the Crossroads Gallery of the Notre Dame Center for Arts and Culture, 1045 W. Washington Street, South Bend. Contact Catherine Osborne at cosborn3@nd.edu if you are interested in scheduling a group visit.