Stephen Andes, an assistant professor of history at Louisiana State University and author of The Vatican and Catholic Activism in Mexico and Chile: The Politics of Transnational Catholicism, 1920–1940, received a Cushwa Center research travel grant to utilize Notre Dame’s University Archives in early October 2016. He supplemented his previous international research with unique insights into Mexican Catholic Action and U.S. perspectives to advance his work on a project titled “Catholic Vagabond: The Transnational Life and Times of Sofia del Valle.” His visit to Notre Dame enriched his biography of Sofia del Valle, whose life illuminates the early phases of Latin American Catholic women’s activism. Andes explores in her story various aspects of gender, race, lay Catholicism, Church history, and broader historical trends from a transnational perspective.

Catherine Osborne, a post-doctoral fellow at the Cushwa Center, interviewed Andes during his time on campus.

CO: What first caught your eye about Sofia del Valle? 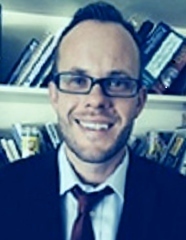 SA: She kept showing up everywhere! At first I was in the Vatican Archives, researching my first book, and I would see her name in various places, and then I found a file with her name on it. It’s not like there are tons of files on laywomen. It was her correspondence with Archbishop Ruiz y Flores, who was the Apostolic Delegate for Mexico in the 1930s. Then I learned that she had spent months and months at a time in the United States in the 1930s and ’40s and gave something like 800 lectures throughout the United States. She was talking on the persecution of Catholics in Mexico. And I was fascinated that this conversation on religious liberty in Mexico fed into a conversation that was happening at the time about religious liberty and education and immigration in the United States. Sofia wasn’t necessarily representative, but she was illustrative of a kind of layperson that was very active. Single women that weren’t nuns but were wholly devoted to the mission of Catholic action, social service. By the 1940s and ’50s, there’s more of this type of woman, but she was on the leading edge.

CO: As we’ve moved in a more “transnational” direction, I think we still tend to think about this as a kind of Rome-centric transnationalism—the center and the spokes. Would you say your story is still pretty Rome-centric, or does it have more of a network metaphor?

SA: Yes, I’d say in the first book it was more Rome-centric, whereas this is more trying to figure out, when you talk about global or transnational history or whatever frame you want to put on it, how did the Church exist across borders? For me, the question is “who are the people who cross borders?” So transnational ideas really come to the fore with immigration and migration, but when we apply that to the Catholic Church at first it’s just pronouncements that come across: Rome says this, and we react. But who were the people that went back and forth? And for me, one important group is this group of really active Catholic women that were mainly middle to upper class, who really began to travel in these networks: conferences in Rome and the U.S., the international league of Catholic women. The leader of the youth section of that was from Belgium, and she knew Sofia very well. A pretty interesting network where people through their work are connected to a wide variety of kinds of active laywomen at the time. So when you talk about the global or transnational Church in the 20th century, I think you have to talk about women’s Catholic activism at the forefront of that. That can be seen in shared devotional practices, especially Eucharistic piety, or devotion toward Therese of Lisieux, or the Virgin of Guadalupe, who is becoming international at this time. Also, these women are united by a shared conception of gender norms and also some tension around that. How to deal with the fact that many of these women are acting like “new women” but at the same time trying to be “faithful”? And then there’s some tension surrounding Catholic solidarity with national loyalties. Sofia is Catholic, Mexican, and a woman, and all along that line she has points of connection to others—but also obstacles to connection. I wanted to tell a story about laywomen, and also about how the Global South became central to the modern Church.”

CO: You’ve pretty much written about Latin America before this. Have you learned anything new and striking about the United States through this project?

SA: So I pretty much cut my teeth as a Mexicanist. My experience in the archives in Rome helped me to think about its relationship to “global Catholicism.” I think seeing the archives there helped me to think about how crucial and fundamental the local is, but I found that a lot of studies on religion in Mexico have moved ultra-local—the study of one village. And being in Rome, I started to think about the local-global axis, and because the story of Mexico and the U.S. in the 20th century has so many different angles, I knew I’d eventually have to do more work on the U.S. as part of that story. This research has been pretty interesting. One thing that I always felt and believed was that Catholic Action was not ever translated into English. Throughout Latin America, in Spain, France, Belgium, you have this very regimented Catholic Action, and the U.S. seemed more like a hodgepodge. But looking at the files in the United States from the 1930s and ’40s, they’re doing their darndest to pull this off—the National Council of Catholic Women and National Council of Catholic Men are trying to be these counterpart organizations to what’s going on in Europe. And what I’ve come to learn is that maybe we need to think about an American model of Catholic Action: the United States is not completely different. It is taking different kinds of influences, and that might have to do with patterns of immigration. Maybe you can’t talk about U.S. Catholic Action as one thing. Empowering the People of God does try to put it in that framework, whereas a lot of studies on American Catholicism have played down the importance of Catholic Action.

SA: It’s not clear who wrote it, but one thing I found that I loved was a fantasy football team that someone at Vatican II assembled using “conservative” and “liberal” bishops and periti [theological advisers].

SA: In Sofia’s correspondence, there was talk about the president of Notre Dame and the president of the Catholic University of America, somehow hearing about Sofia and wanting her to talk. I thought for sure she’d been at Notre Dame, and I haven’t been able to find any record. It won’t make or break the story, but it surprises me that she wasn’t here. She spent a lot of time with organizations of Catholic women that might have money, like the Catholic Daughters of the Americas. So it might have something to do with her having decided that it was better to focus on those connections.

Addendum: In a follow-up note, Stephen recently said this about his research experience at Notre Dame:

SA: I found dozens of copies of the Mexican Catholic Action Bulletin in the University Archives. This was a great find as these journals are rare, even in Mexico. Also, I found some new documents written by John J. Burke, an American priest who helped negotiate an end to the Mexican Cristero War in 1929. I should also mention that Notre Dame’s amazing microfilm collection of newspapers and pamphlets was tremendously helpful in tackling the public reaction of the U.S. Church to the Mexican religious conflict. I even found American newspapers talking about Sofia del Valle’s lecture tour in the 1930s and ’40s. As scholars of Latin American Catholicism become more aware of the transnational networks linking the U.S. to Central and South America, I think Notre Dame will become an important place for research on the regional interconnections.

(Andes' earlier work, noted at the start of this piece, appeared in The American Historical Review.)