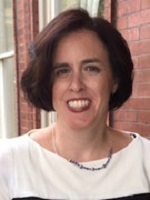 Maureen Wangard, who recently received her Ph.D. in higher education administration, took an unusual and timely direction in the interdisciplinary research for which she received the Cushwa Center’s support in summer 2016. Her Research Travel Grant, named for Notre Dame President Rev. Theodore Hesburgh, C.S.C., allowed her to visit Notre Dame and explore the University Archives for 1960s documents relevant to Rev. Paul Reinert, S.J. This long-time president of Saint Louis University, who collaborated frequently with Father Hesburgh, joined with him in key initiatives to shape the future of governance for Catholic universities, Wangard says. She studied Father Reinert’s legacy of leadership in her dissertation research and now is expanding and refocusing her work as a biography of the Jesuit. Her book is intended for publication in 2018, when Saint Louis University will celebrate its bicentennial year.

Shane Ulbrich, assistant director of the Cushwa Center, interviewed Wangard about her research at Notre Dame.

SU: Tell us about your project.

MW: Father Paul Reinert was president of Saint Louis University from 1949 to 1974, a time of massive social and cultural changes. Under his tenure, Saint Louis University underwent racial integration, college campuses across the country became embroiled in political and social protest movements, and for Catholic colleges and universities, Vatican II ignited unprecedented transformations among Catholics worldwide. During this tumultuous period, Saint Louis University rapidly expanded, and Father Reinert is remembered as one of its most beloved presidents.

SU: Out of the archival material, or your broader research, is there a particular episode in the collaboration of Reinert and Hesburgh that brings their relationship to life for you?

MW: Father Reinert and Father Hesburgh maintained a close partnership throughout their careers. The archival material at Saint Louis University and Notre Dame reveal the depth of their collaboration in establishing a lay-led board of trustees at both universities. In addition, I found material pointing to the importance of the partnership between Notre Dame and Jesuit colleges and universities nationwide in crafting the Land O’Lakes document. Father Hesburgh and Father Reinert had complementary roles in bringing about the changes that occurred at Catholic universities during the 1960s.

Father Hesburgh was an internationally respected leader in Catholic higher education, supported by the prestige of the University of Notre Dame. However, if he had acted alone in establishing a lay-led board and challenging the authority of Vatican control over Catholic colleges and universities, it would not have had the same impact because it wouldn’t have led to changes at Catholic institutions nationwide. Instead, change would have been limited to Notre Dame. Father Reinert was the president of the Jesuit Education Association, and thus he had access to Jesuit college and university presidents across the country. The Jesuit order established the majority of Catholic colleges and universities worldwide; thus, they have the most institutions and the most students among Catholic colleges and universities. Engaging the Jesuits to shape the landscape of Catholic higher education magnified the impact of the Land O’ Lakes document and arguably advanced the movement toward lay-led boards.

SU: What sources out of the Archives have been most helpful? Has anything surprised you?

MW: Materials from the International Federation of Catholic Universities (IFCU) helped me understand the interdependence between Notre Dame and other Catholic universities in changing the relationship between Catholic colleges and universities and the Vatican. This underscores the idea that no one university or individual could shape such massive changes alone; instead, it was a partnership of many talented people who worked together to achieve a common goal. Father Reinert explained that the larger group [of educational leaders] who met at [Land O’Lakes, WI,] had trouble succinctly stating the points they agreed upon, whereupon Father Bob Henle, S.J., broke away from the assemblage and wrote a draft of the Land O’Lakes document. Upon Father Henle’s return, the participants approved of his draft, and thus it became the final statement produced at the meeting. I found a letter written by Father Hesburgh in which he directly reports Father Henle drafted the Land O’Lakes document almost entirely on his own. Given the importance of the statement, I was surprised that one person wrote almost the entire draft single-handedly.

SU: How explicitly did the Second Vatican Council figure in Reinert and Hesburgh's thinking and leadership?

MW: Both Father Hesburgh and Father Reinert found inspiration in Vatican II and saw that lay Catholics needed to become actively involved in church leadership. Both men agreed the Church needed to look outward toward the modern world, and they wanted Catholic higher education to embrace this model for both theological and practical reasons. While the process in which individual Catholic institutions shifted toward lay leadership varied, most Catholic university presidents shared the underlying motivation to bring Catholic higher education more in line with the spirit of Vatican II. In the case of Father Reinert and Father Hesburgh, because they shared a similar vision, they could work together to discuss how to confront some of the challenges and controversies they knew would be inevitable in the face of change.

SU: You’ve studied Reinert and Hesburgh particularly closely, but their influence extended well beyond their own universities. Have you come away with any new insight into broader processes of moving to lay trusteeship in Catholic higher education?

MW: In looking at Notre Dame and Saint Louis University, there were similarities and differences in establishing a lay-led board. Because there are so many Jesuit colleges and universities located in cities across the United States, Father Reinert had to consider the repercussions to other Jesuit universities; he knew that what happened at Saint Louis University would likely impact other Jesuit institutions. Thus, he worked within the Jesuit hierarchy and gained approval from the Jesuit Provincial, Fr. Pedro Arrupe, to shift toward a lay-led board of trustees. In the case of Notre Dame, Hesburgh sought approval from his religious community, but, because he had such a close friendship with Pope Paul VI, he went directly to the pope to seek permission for Notre Dame to establish a lay board of trustees. When establishing procedures and by-laws, all American Catholic colleges and universities had similarities and differences in terms of how they established lay-led boards. For example, some institutions gave unrestricted power to lay boards while others ensured their founding order could maintain influence through various methods.

SU: What other archives and collections are you visiting for this project? Whom are you interviewing from around the country? How have the materials here related to those other sources?

MW: Saint Louis University’s archive includes 42 boxes of material left by Father Reinert, covering his time as president and chancellor. While papers in that collection are the foundation of the research, I have also visited many other archival collections. The College of New Rochelle houses the papers of Sister Alice Gallin, O.S.U., and I was able to peruse documents she collected and had the honor of interviewing her for a few hours because she worked closely with both Father Hesburgh and Father Reinert. In addition, I’ve viewed the papers of Sister Ann Ida Gannon, B.V.M., former president of Mundelein College in Chicago, because Gannon is widely recognized as an instrumental leader at the national level. While women religious were not present at the Land O’Lakes meeting, they were engaged in the discussion of lay leadership at their institutions and should be given greater recognition for the roles they played in changes that occurred in Catholic higher education during the 1960s and 1970s. Finally, I’ve used the archives at Loyola University in Chicago, and I plan to go to Boston College to examine the Jesuit Education Association’s archival papers.

The Hesburgh collection is valuable because of the breadth of resources. Father Hesburgh was a leader on many different fronts. Thus, his papers encompass most conceivable topics for someone researching material about Catholic higher education—racism, political issues that arose during his leadership at Notre Dame, and Catholic intellectual thought. The extraordinary organization of such a large collection made it very easy for me to locate material connected to [resources] I’ve found elsewhere. For instance, Father Reinert’s collection includes some documents related to the Land O’Lakes meeting and his involvement in the International Federation of Catholic Universities (IFCU). However, because of his leadership of the IFCU, Father Hesburgh’s papers provide context to decisions made in the United States and help the researcher see how decisions made in the United States impacted Catholic colleges and universities around the world. In addition, Michael O’Brien, the author of Father Hesburgh’s biography, donated the recordings he made when he was researching Father Hesburgh’s life. I was fortunate to listen to interviews of people connected to Father Reinert and Father Hesburgh who are no longer living, which is very helpful since Father Reinert and so many of his contemporaries are deceased. Finally, seeing papers from Father Hesburgh’s collection gave me insight on how he perceived Father Reinert. For example, in a letter written in May 1967, Father Hesburgh wrote, “As you know, he [Rev. Edward Rooney, S.J.] was recently replaced as President of the Jesuit Educational Association by Father Paul Reinert, who is perhaps the most important university president among the Jesuits in America, and also the best.” Father Hesburgh’s strong regard for Father Reinert provides insight into how his leadership was perceived by influential people in Catholic higher education during a revolutionary period.

SU: When can we expect to see your book?

MW: Saint Louis University celebrates its bicentennial in 2018. Father Reinert inspired admiration and loyalty among those who knew him, and I suspect people connected to SLU would enjoy reading about someone whom they remember with such love. This inspires me to finish the biography in time for 2018!

Addendum: In a follow-up conversation, Wangard recently said this about her several days of research activities at Notre Dame.

MW: As a non-traditional student pursuing my Ph.D., juggling time and expenses and restarting a career at midlife, the Theodore M. Hesburgh Research Travel Grant offered recognition that my work was worthwhile and took a lot of anxiety off my shoulders. I was able to really think about things at Notre Dame because I had the time. I’m very grateful for it, and I can’t say enough nice things about the Archives staff.