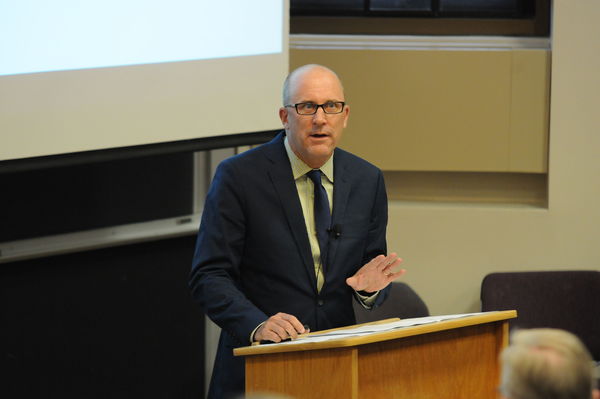 The 2014 Cushwa Center Lecture on September 17 featured a presentation by John T. McGreevy, the I. A. O’Shaughnessy Dean of the College of Arts and Letters and professor of history at the University of Notre Dame. This lecture, titled “The Jesuits, Father Sorin, and the 19th-Century Catholic Revival” was part of a yearlong celebration of the bicentennial of the birth of Father Edward Sorin, C.S.C., founder of the University of Notre Dame.

After an introduction by Cushwa Center Director Kathleen Sprows Cummings, McGreevy began by quoting excerpts of letters between John Adams and Thomas Jefferson, each disclosing their loathing for the Jesuits and the restoration their order was experiencing at the time. Jefferson wrote to Adams, “I dislike, with you, their restoration because it marks a retrograde step from light toward darkness.” In 1773, McGreevy explained, the suppression of the Jesuits by Pope Clement XIV forced the order to abandon its missions in French Louisiana, Spanish California, and the British colonies. The restoration of the Jesuits in 1814 by Pope Pius VII caused the anxiety of these former U.S. presidents. Political and economic realities were the cause of both the suppression and the restoration. Despite this, however, McGreevy pointed out that neither the suppression of the Jesuits, nor their restoration, are mentioned in U.S. history textbooks.

McGreevy made use of this key fact to introduce his current writing project, a book titled Nineteenth-Century Jesuits in the United States: A Global History. This book, he said, will include case studies of European Jesuits moving to the United States and American Jesuits moving to the Philippines. According to McGreevy, Jesuits are central to Catholic revival and diaspora, the movement of people, institutions, and ideas that altered modern history on both sides of the Atlantic. While the history of the Jesuits is not a substitute for 19th-century Catholic history as a whole, McGreevy argues that it provides an important case study, as Jesuits moved from the margins to the center of Catholic life at this time.

In the 1830s and ’40s, more than half of the world’s 2,000 Jesuits volunteered for missionary service, and it was during this time that the Jesuits established new missions in countries around the world, including Syria, Argentina, India, and China. 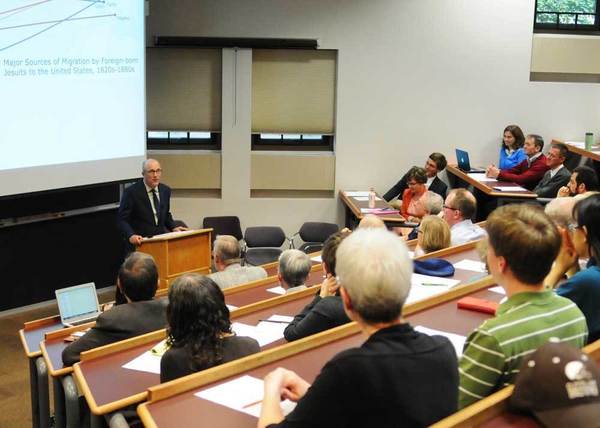 Between 1814 and 1900, more than 1,000 Jesuit missionaries moved to the United States, McGreevy said—more than any other country—and they were following “the Catholic tide” coming from Ireland, Germany, Italy, and Eastern Europe. Additionally, half or more of all those who left Europe between 1820 and 1900 were Catholic, and the largest number of those immigrants came to the United States. Finally, McGreevy set the stage for the rest of his discussion by mentioning that between 1840 and 1900, the Jesuits were kicked out of 22 European and Latin American countries, rejected by national governments, and seen as a threat to the stability of European nation states.

Thus, McGreevy asserted, when Jesuits from these countries arrived in the United States carrying books, journals, pamphlets, holy water, rosaries, and other sacramental and liturgical items, they brought their European Catholic world and translated it into an American idiom. At this time, Jesuits preached parish missions and attacked both anti-Catholic Republicans and Catholic institutions they saw as overly liberal, such as Catholic University. McGreevy dryly suggested to his audience that Catholic perspectives had changed over time. He also asserted that by this time American Catholics had built a community “attuned to the reverberations of global Catholicism”—a community unimaginable in 1816 when isolated priests and tiny congregations “contemplated the vastness of the American frontier.”

To more fully tell the story of American Catholicism and the 19th-century Catholic revival, McGreevy gave the example of Father John Bapst, S.J., a Swiss-born Jesuit priest who was ordered to leave Switzerland in 1851 and arrived in Maine shortly thereafter. According to McGreevy, Bapst’s work in Maine exemplified the 19th-century Catholic revival in three ways. First, Bapst’s primary goal was to instill basic doctrinal knowledge in Catholics loosely connected to the institutional church. Second, he worked to form a more explicit Catholic devotional culture through parish missions. Third, Bapst emphasized the importance of Catholic education and institutions.

McGreevy unpacked this third point by explaining how Bapst denounced the use of the King James Bible in public schools and instructed young Catholics not to read this Protestant translation in school. After Catholic students were expelled for not participating in this mandatory activity, however, he sued the school district on the grounds that the students retained their religious liberty in school and should be allowed to use their own Bible. The legal case failed, however, and to many in the community, Bapst’s actions represented a threat to civic unity. Because he was convinced that no public school could be religiously neutral, Bapst started a Catholic school.

According to McGreevy, Bapst also exemplified the 19th-century Catholic revival in his suspicion of the modern nation-state. Jesuits like Bapst believed romantic nationalism was dangerous, and he feared that nationalist ideals might supplant religiosity and the institutions of the family and community. Bapst also feared that the United States might become intolerant of a global church. McGreevy noted that Bapst’s supporters refused to vote, protested the Fourth of July, and deemed nationalism “primitive tribalism.” At the same time, Bapst’s opponents argued that Bapst and his followers hated everything about America, including the press and schools. This opposition, McGreevy said, reached such intensity that one night a mob ambushed him after Mass and tarred and feathered him.

Following Bapst’s story, McGreevy detailed the many things Bapst had in common with Notre Dame’s founding president, Edward Sorin, whose “piety and determination to found distinctive Catholic institutions certainly mark him as part of the revival.”

“Like Bapst,” McGreevy said, “Sorin was marinated in Catholic devotional culture, which was just reaching full pitch.” He read and wrote about miracle accounts and made many visits to Lourdes; he named the future basilica after the devotion of the Sacred Heart. He carried relics, stained glass, and chalices from France and Rome back to Indiana, bringing a European Catholic culture to America. McGreevy also pointed out that both the Jesuit and Holy Cross orders were global from their founding and came to be “less of an anti-modern exception and more of a global rule.” Finally, just as Sorin was the first president of the University of Notre Dame, Bapst—after his time in Maine—became the first president of Boston College.

McGreevy then began wrapping up his presentation by naming global history as the most important historical project in recent decades, and challenging historians to fill the holes that currently exist when telling the story of Catholicism in America.

In his conclusion McGreevy maintained that since 1500, Catholicism has been the most important multilingual, multiethnic institution in the world, and that 19th-century Catholics’ orientation to the world and their linguistic curiosity “now seems oddly contemporary.”

Vatican II presented the emergence of a world church, and today the church has its first modern pope from outside Europe— a Jesuit—who, in his desire to “wake up the world,” firmly opposes “a globalization of indifference.” “It is uncertain how this new era of Catholic globalization is going to work,” said McGreevy, but “the Catholic connections and communities now being forged by text messages and Skype necessarily follow the paths that were laid by Bapst and Sorin.”

For more on our Fall Events, see the Spring 2015 American Catholic Studies Newsletter.