Luca Codignola-Bo has joined the University of Notre Dame’s Cushwa Center for the Study of American Catholicism as its first senior fellow. He joins the Cushwa Center’s postdoctoral fellow, Matteo Binasco, at the Rome Global Gateway, where he will oversee colloquia, seminars, and conference planning on a new project entitled “North Atlantic Catholic Communities in Rome, 1622-1939.” 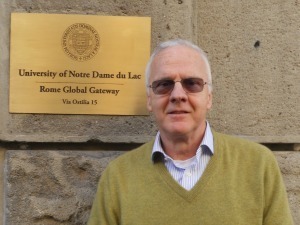 A historian of the early modern era, Codignola-Bo is former professor of Early North American History at Università di Genova (Italy), where he served on the faculty for 25 years. His career also includes four years as head of the Institute of History of Mediterranean Europe of Italy's National Research Council and recent affiliations with University of Toronto, Université Laval, and Saint Mary's University (Halifax). The author of 10 books and editor of more than a dozen volumes, Codignola-Bo’s recent publications include Little Do We Know: History and Historians of the North Atlantic, 1492-2010 (edited by Binasco, his former student, and published in 2011); and the six-volume Calendar of Documents Relating to North America (Canada and the United States) in the Archives of the Sacred Congregation "de Propaganda Fide" in Rome 1622-1846 (2012).

“I have long followed the activities of the Cushwa Center from afar, and found it a vibrant community with interests spanning from the early days of Catholicism in North America to the more current issues being debated within the U.S. Catholic Chuch and their worldwide ramifications,” Codignola-Bo said.

“Luca has been an invaluable partner in helping the Cushwa Center develop projects in Rome,” Cummings said. “I anticipate his new role as senior fellow will lead to more opportunities for Cushwa and for Notre Dame, in Rome and throughout Italy.”

Cummings, Codignola-Bo, and Binasco will convene a meeting of Rome-based scholars this March to work on the North Atlantic Catholic Communities in Rome project, which is now in the planning stages and is scheduled to culminate in an international conference in 2017. The project aims to identify, preserve, and disseminate Catholic archival records related to North Atlantic religious communities that worked in and from Rome—communities that have been at the margins of mainstream historiography. Through identifying and preserving the Church’s archival heritage across the English-speaking world, the project will serve as a basis to illuminate the truly global nature of Catholic history and mission.

Codignola-Bo began conducting research related to the Catholic Church in North America in Roman archives in 1975 and continued to do so throughout his career. Over the years several other Italian scholars joined his pursuit. He has collaborated most frequently with Giovanni Pizzorusso (Università di Chieti), Matteo Sanfilippo (Università della Tuscia), and, in recent years, Matteo Binasco. “We have produced hundreds, if not thousands, of pages on our findings,” Codignola-Bo said. “My sense is that these results are as yet to be shared by North American scholars. Through the Cushwa Center—and the Notre Dame community in general—I wish to make the results of the research that has been carried out in the Roman archives the past 40 years or so better known.”