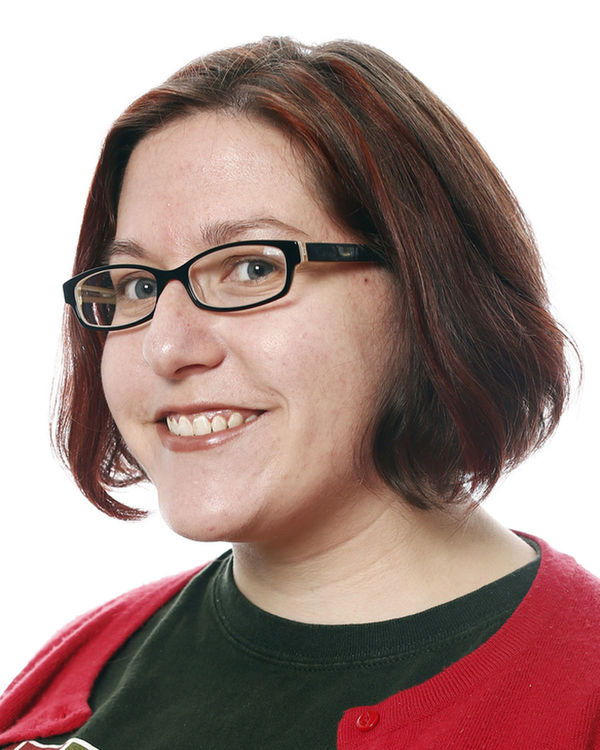 Jessie Whitish received her master’s degree in women’s and gender studies from the University of Louisville this year. The research she did in the archives relates to her thesis, “Radical Sister: Lucy Freibert as Feminist Nun, Activist, and Educator.” She is considering a PhD in history, and she will be presenting at the Cushwa Center’s “Nun in the World” symposium in May.

Who is Sister Lucy Freibert? How did you first learn about her, and what captured your attention?

Sister Lucy Freibert is a Sister of Charity of Nazareth from Louisville, Kentucky. In the early 1970s she left SCN’s college (now Spalding University) to begin teaching English at the University of Louisville. She taught the first women’s studies course at UL and is something of a “founding mother” of the Department of Women’s and Gender Studies there. She was hugely influential at UL in establishing the department and in building a culture that supports women students and faculty. Lucy was also active in the local grassroots feminist movement and caught a lot of criticism for her publicly pro-choice viewpoints, but she remained tightly connected to SCN, and they consistently supported her.

I first learned about her from a UL professor who mentioned in passing that one of the founders of our department was a nun. I went to Notre Dame for my undergraduate education and really came into my own feminism while there, and since then I’ve been interested in the powerful, if sometimes strained, connection between Catholicism and feminism. I began researching Lucy for a small project for one class, and that eventually grew into a larger oral history project that served as my thesis.

How did she connect her faith with feminism?

Without a doubt, Lucy sees them as inextricably intertwined: Her faith informs her feminism, and her feminism is rooted in her faith. Her faith, as a woman of God, compels her to be a feminist and have a vision of equity and justice that she has always worked toward. This is most apparent in her role as a teacher and professor; she talks a lot about how teaching is how she lived her ministry and her feminism. I think Lucy’s faith, feminism, and teaching have always been interconnected--and are often the same.

Lucy never saw any conflict between her faith and her feminism, but she had--and continues to have--some issues with the Church. They were never irreconcilable conflicts, though, and she really felt she could make the Church better for women. And she thinks it is. For example, Lucy lives at the SCN Motherhouse now, and she loves the priest that says mass there because he is so inclusive in his teaching and language.

How does her story fit in with the larger story of U.S. sisters during this time?

By and large, Lucy is representative of other U.S. sisters. Sisters were ahead of the curve in their preparation for and acceptance of the post-Vatican II Church renewal. Their ministries and daily lives shifted dramatically--losing the habit, pursuing advanced education and expanded ministry. Many communities began to focus on social justice issues or on women’s needs. And many individual women religious and communities both grappled with and embraced feminism and activism.

Lucy was a high school teacher and wasn’t sent to study for her PhD until after Vatican II. SCN chose where she would get her master’s in the early 1960s--St. Louis University--but let her choose her PhD program. She went to a secular school, University of Wisconsin, which is unusual. Madison was a hotbed of political activity in the late 1960s, and she says she received a political education there.

What’s most unusual about Lucy is that she eventually taught at a secular university. SCN sent her to get her PhD so that she could teach at their college. A lot of other congregations did the same. But Lucy had a bit of a falling out with administrators at Spalding College after she returned from Wisconsin because they thought she was too radical in the classroom. She decided to apply for a job at the University of Louisville, and she taught there for over 20 years.

What was distinctive or representative of her order during this time?

The Sisters of Charity of Nazareth began in 1812 in Nazareth, Kentucky (a small town outside of Louisville). Like so many other orders, their ministries were primarily teaching and nursing, and they administered schools, including a high school and Spalding College. Like a lot of other communities, they were very forward-thinking in the 1970s. Sr. Barbara Thomas served as president of the Congregation from 1972-1980 and was elected president of the Leadership Conference of Women Religious in 1975. She really pushed for SCN, and sisters in general, to lead Vatican II renewal.

What collections did you examine at the Notre Dame Archives?

The LCWR papers are in the archives, and I looked through a lot of educational materials, conference programs, and speeches from the 1970s and 1980s to see how they connected to the broader women’s movement. Being able to follow some of Barbara Thomas’s leadership in LCWR in interviews and correspondence was great. The papers of the National Assembly of Women Religious  were also exciting because they had a national convention in Nazareth in 1976. The archives have a rich SCN collection, too, so I was able to compare a lot of contemporaneous materials. So much of the content I found is stellar context for Lucy’s story, but I wasn’t able to use it in my thesis because it was mostly complete by that time. I’ll use it in whatever comes next for me.

Often gender studies and religious studies are not the most comfortable pairing. What kind of feedback do you get from scholars in each field about your project, and how do you describe yourself as a scholar?

My degree from Notre Dame is in gender studies, so I came into this work with a frame of religious studies and gender studies flowing together. I quickly learned I was in the minority. Women’s and gender studies is by and large a secular field. A lot of people can’t see past the tension between religion and feminism and the oppressiveness of institutions, so they overlook the power of faith, church, and community networks. But good women’s historians know that it’s tough to study women’s history without examining religion because churches have often been places of strength and leadership for women.

Catholic theologians and historians, on the other hand, are really embracing feminist theologies and histories. That’s not a new trend and has been building for decades, but the study of nuns and sisters seems to be particularly hot right now.

I consider myself a feminist historian and am generally interested in social movements. Within that frame, and particularly when looking at modern social movements, women religious were (and are) so unique and effective as change agents because they operated outside of most gender and racial norms. That locus of analysis is the sweet spot for me.

Nun in the World Symposium