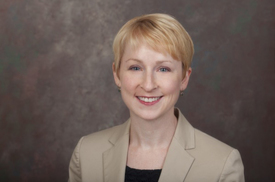 Rebecca L. Davis is associate professor of history at the University of Delaware. She received a 2017 Research Travel Grant for her book in progress, American Converts: Religion and Identity Since World War II, which argues that celebrity religious conversion experiences reveal shifting ideas of self and identity at play in the postwar American cultural imagination.

Catherine Osborne, Cushwa’s postdoctoral fellow, met with Davis in May during Davis’ visit to the Notre Dame Archives, where she consulted materials on prominent Catholic converts including Clare Boothe Luce, Dorothy Day, and Thomas Merton.

CO: I’m glad you’re giving some attention to Clare Boothe Luce, who I think is one of the most fascinating women of the century. How did you get interested in her?

RD: It was pretty much an accident. I was researching a completely different topic—I had thought I might write about the religious views of sex radicals in the 1920s. I started to do keyword searches to see if I could find people whose correspondence might be helpful for that project, and I learned instead about Luce’s conversion and career and got drawn in from there.

CO: Do you see similarities and differences between postwar conversions to Catholicism and to other religions (Nation of Islam, neo-paganism, etc.)?

RD: There are different ways that people talk about their conversions. For some, such as evangelical Protestants, it’s about self-transformation. For many converts, joining a faith is about trying to become the person God wants you to be. Some, like Luce, talk about their conversion as an accomplished fact; others, like Thomas Merton, talk about conversion as a lifelong process. But then there’s a different way of thinking about it: some converts speak along the lines of “my whole life I’ve been trying to fit in and failing, but that’s because I’ve been surrounded by Baptists and it turns out I’m really a Jew.” Or, as for Starhawk, “I’ve been raised in a patriarchal religion but it turns out I’m really a neopagan feminist.” All of this gets back to the question of “who am I” and “what is my identity”—do people need to change who they are, or do they just need to find a religious system that’s a good match to the person they already are? In the wake of psychology’s seismic influence on 20th-century American culture, these are increasingly the questions people are asking about religious change.

CO: I’m wondering about the role of sexual selfhood in religious conversion. I’m thinking especially of Merton and Day here, who both wrote pretty extensively about their sexuality and what we’d now call their gender identities.

RD: Gender and sexuality are central to these stories—as they are central to everything. Luce, Day, and Merton all in different ways end up celibate. Dorothy Day is an interesting case; there are lots of newly published letters between her and her common-law husband, Forster Batterham, and between her and her daughter, which make it clear that her story was much more complicated than the one she tells in The Long Loneliness. In the autobiography, she converts, Batterham is against it, and he leaves. In the letters, we discover that their separation was far less tidy. The letters are full of physical aching too—she’d had multiple lovers before, and it was years before she stopped asking Batterham to come home. Yet for Day as for Merton, celibacy functioned as a particularly Catholic way of showing fuller devotion. Together with their chosen poverty (solemn vows Merton took as a monk, and Day’s commitment to live among the abject poor), sexual self-denial expressed the extent of their devotion. But if you flash forward to Starhawk, conversion becomes about connecting your spirituality and your sexuality, affirming their mutuality. Or, at the same time, for the neo-evangelicals, it’s about connecting your faith to a set of sexual ethics and norms distinct from the mainstream culture, and about centering marital sexuality within their religious identity.

I also have a chapter that I’m still working on about conversion narratives of ex-communists. Elizabeth Bentley and Louis Budenz become Catholic. Whittaker Chambers becomes an Episcopalian and then a Quaker. All of them shift their sexual self-presentation. In 1948 Chambers told the FBI that he’d given up homosexuality the minute he found God, and was now a devoted family man. Bentley was rumored to be bisexual, but when she writes her memoir she’s now this sweet Vassar girl. And Budenz—he and his wife get married in the church. So there’s this whole performance of heterosexuality that goes into their conversions.

CO: Can you talk a little about what you’re finding at the Notre Dame Archives? Any favorite documents that have turned up so far?

RD: One of the bigger collections for me is the John O’Brien papers. O’Brien was a professor of theology at Notre Dame for quite a while. He wrote several books to teach Catholics how to convert others or to inspire people to convert others. He also collected short conversion narratives and published them in a collection called Road to Damascus. His point, which Clare Boothe Luce also makes, is that Catholic conversion is an intellectual journey, as opposed to a conversion of the heart. Road to Damascus is a collection by leading Catholic intellectual converts. This is interesting to me because when Protestants try to convert people they focus much more on how you feel.

I’ve also looked at the Sheed and Ward papers. In some sense conversion is private, but becoming a convert can also be about becoming part of an economic and a social community. All the leading converts were aware of each other and many corresponded or visited each other. They blurbed each other’s books. Luce sent a typewriter and record player to Merton at Gethsemani, and he sent her handwritten copies of his poems and drawings. Claude McKay spent time at Catherine de Hueck’s Friendship House, and the Catholic Worker was the last place to publish his poems. Merton and Day corresponded, and Day and Luce corresponded. Gladys Baker corresponded with other converts and talked about reading Road to Damascus. The Sheed and Ward papers give some insight into this network of converts.