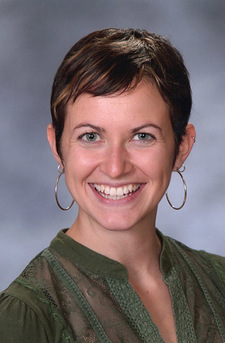 Ann Huey is a doctoral student in theology at the University of Dayton. She is planning to write a dissertation exploring the devotional lives of Catholic mothers in the German American town of Oldenburg, Indiana. She received a 2017 Research Travel Grant to conduct research on this topic at the Notre Dame Archives. Benjamin Wetzel, a postdoctoral fellow at the Cushwa Center, recently met with Huey to discuss her work.

BW: Can you briefly describe your project for us?

AH: If we are to tell the story of American Catholic history, then we must tell the stories of Catholic mothers in the 1950s. By then, Catholicism had become the largest religious body in the United States and, within the religion itself, Church participation was at a high. In large part, this growing presence of the Catholic Church occurred because of mothers. They were seen as the religious presence in the domestic sphere and were the ones responsible for the spiritual well-being of their family. Mothers were often the ones who insisted that their families attend Mass, be involved in the Church community, pray daily, and participate in other Catholic rituals. Unfortunately, we have not paid enough attention to these women’s stories and so in my research, I will be providing these women the space to speak.

For this specific project (which I hope to turn into my dissertation), I will be researching Catholic mothers in the small German Catholic village of Oldenburg, Indiana. There are two main reasons why I am using Oldenburg for my research location. The Midwestern German Catholic story is a large part of the overall American Catholic story and Oldenburg is the quintessential German, American, and Catholic village. More personally, my mother is from Oldenburg and I want to tell the story of all the strong, loving, and faith-filled women who have shaped my own life and my passion for this research. 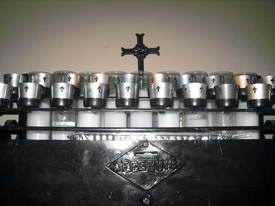 This project will be centered on interviews that I perform with women from Oldenburg who were mothers in the 1950s. I will ask them various questions about their daily lives during that time period, including what sort of devotional rituals they practiced. In the end, I hope to gain a clearer picture of how they lived out their Catholic faith on a daily basis, and how their faith influenced their interpretation of “motherhood.”

BW: How do you see your project intervening in the scholarly literature?

AH: This study will add to the field of American Catholic history because it will include the often unheard voices of 1950s Catholic laywomen. This project also emphasizes the importance of allowing the subject’s voice to shape and lead the narrative and, though this emphasis is not a new technique, I believe that it has not been utilized enough in the history of Catholic laywomen. And finally, my use of devotional practices as a lens into the daily lives of Catholic laywomen fits with other scholarship that focuses on the importance of “lived religion” and scholarship that uses the semiotic method in order to perform a cultural analysis on a specific community of people.

BW: What resources did you find especially helpful at the Notre Dame Archives?

AH: The archives at Notre Dame have a large collection of materials from the Oldenburg Franciscan Sisters who ran both the elementary school and the all-girl high school, Immaculate Conception Academy (ICA), in the village. Within this collection, I was lucky enough to find ICA student “exam books” from the 1890s to early 1900s. Though this is an earlier time period than what I am focusing on in this project, there was great material within these exam books that will provide wonderful background and give me a starting place for my interview questions. For example, these exam books included student compositions explaining their daily routine, including specific prayers that were said and devotions that were practiced. These compositions also included information about the annual religious celebrations of the school and village. 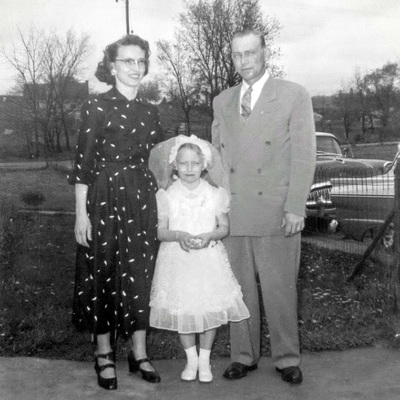 Huey's grandmother, grandfather, and aunt at her aunt's First Communion, 1958

Within this collection, I also found a 1943 “Manual of Daily Prayers: Lovingly Inscribed to Their Pupils by the Sisters of St. Francis.” This is an invaluable find because many of the students who would have been attending ICA in 1943 would become mothers in the 1950s. They would have had this book of devotions and possibly depended on it in their own religious practices.

BW: How did you become an historian of American religion?

AH: In my master’s program at Xavier University, I took a class on American Catholic history and I fell in love with the topic. What really got me excited was a project that we worked on which involved going into the archives at the public library in Cincinnati and researching specific female USO members who worked at the Cincinnati Union Terminal during World War II. I was so amazed at all of the information that I could gather by using the microform machine and reading old newspaper clippings about these women. These were not famous women by any standard, but by researching them and reading about them, I was able to allow their stories to come alive and influence my picture of Catholic women in the 1940s.