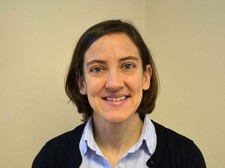 Katherine Dugan is assistant professor of religion at Springfield College, and holds a Ph.D. in religious studies from Northwestern University. She co-edited From the Pews in the Back: Young Women and Catholicism (Liturgical Press, 2009). She received a 2017 Research Travel Grant from the Cushwa Center supporting research for her current project, provisionally titled, Hip Catholicism: The Remaking of American Catholicism by Millennial Missionaries, under contract with Oxford University Press. Catherine Osborne met up with Dugan in June to talk about her research.

CO: Unlike with most of the people I interview, I’ve actually read your dissertation, so I know that it’s a really detailed, sensitive ethnography, based on a couple of years of immersive fieldwork. You seem to have spent nearly as much time hanging out with the missionaries you study as they spent hanging out with the college students they were evangelizing. I would guess that your footnotes are maybe 80–90 percent field notes and interviews, rather than secondary literature or archival sources. Your grant proposal detailed some of the reasons why you want to add more archival and other historical research as you rework the material into a book. What has it been like to spend more time with boxes of old paper and less time having interpersonal interactions with your subjects? How does your research process “feel” different when it’s with files rather than in conversation or studying social movements?

KD: I should admit that other than a brief jaunt to some archives of a small-town newspaper, this was my first sustained foray into archives. So I should first express my gratitude to the Notre Dame Archives for their patience!

Spending a week in these archives was, frankly, a blast. I actually think that ethnographic research and archival research share some sensibilities—in both cases, I found myself following leads, asking “so what?”, and wondering what particular sequences of events led to the moment I was studying. But, certainly, reading documents, scanning texts, and searching for references in newspaper articles had a different feel about it. One key difference is that when I conduct ethnographic interviews, I get the chance to ask clarifying questions or follow up later about things that are unclear to me. In the archives, that follow-up took the form of looking closer at a text or reading between the lines of the meeting minutes or trying to imagine the scene described. The archives felt more like a sleuthing adventure!

CO: My second question about the increased archival research is more about content. What have you found in this new, post-dissertation research that confirms speculations you already had? Have you changed your mind about anything?

KD: As your question implies, one of the reasons I wanted to spend time with “old paper” was to investigate some hunches I have about the less explicit origins (the genealogy) of the organization I study. My 14 months of ethnographic work was with millennial-generation missionaries hired by an organization I call by a pseudonym, DIRECT (Disciples In Relationship Evangelizing Catholics Together). The formal story of its founding starts in 1997 and 1998. But over the course of my interviews and conversations with missionaries, executives, and one of the founders, three themes kept pointing to a less formal history: (1) concerns over the state of Catholic higher education; (2) the papacy of John Paul II; and (3) language of “conversion” and Catholics needing to “evangelize.” 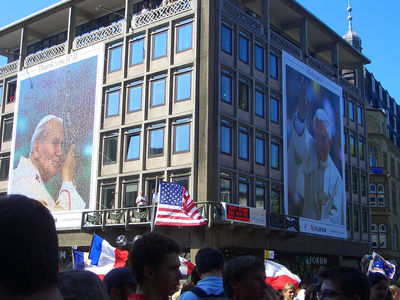 A mural of John Paul II at the 2005 World Youth Day in Cologne, Germany

The first reflects my greatest surprise from my time spent here in the University of Notre Dame Archives. Part of the informal history of DIRECT is intertwined with the Franciscan University of Steubenville. But I have not visited the Steubenville archives and I have only read a few things by the university’s long-time president, Michael Scanlan, T.O.R. (a Franciscan Friar), who died in January of this year. I had not realized how much the Judith Tydings holdings (an early leader in the Charismatic renewal movement) in the archives delve into Scanlan’s time as president of Steubenville.

The second theme I investigated was Pope John Paul II’s visit to World Youth Day held in Denver, Colorado, in 1993. While the holdings are not overly extensive, there was enough by way of news coverage and planning documents to confirm that the impact of John Paul II’s visit was dramatic. The missionaries in my work are proud to call themselves “JPII Catholics” and looking at these documents confirms part of why that is so.

CO: The organization you’re studying doesn’t seem to have much of a presence at Notre Dame—you mention Benedictine College and Franciscan University of Steubenville as major “feeder” schools, as well as large public state universities as the main sites of evangelization. But there is also a Notre Dame connection you’re examining: the influence of the Catholic charismatic movement of the 1970s and 1980s. Can you talk a little bit about how your archival research at Notre Dame on the charismatic movement has contributed to your understanding of the wider context of the missionary movement?

KD: One of the driving forces behind the missionaries I study is an effort to “evangelize” college students (and, increasingly, Catholic parishes). There is, of course, a long history of Catholic missionaries, but I started to notice parallels between the way I heard Catholic charismatics write about evangelization and the way DIRECT missionaries do.  While reading the work of scholars like Thomas Csordas and Meredith McGuire, I had developed a hunch that the organization in my work is one of the legacies of the Catholic Charismatic Renewal (CCR). Both describe a “conversion” experience not as switching religions or denominations, but as an “encounter” with what is often described as “the person of Jesus Christ.” It’s this emphasis on encountering God that missionaries and charismatics share—and the force of that encounter, it seems, drives both to want to spread it. While my research in the Notre Dame Archives did not draw a straight line from the CCR to DIRECT, it has provided me with enough evidence to say that the CCR helped foster an environment that has allowed DIRECT to grow very quickly in its fifteen years. The evidence in the archives shows that Catholics in the renewal were concerned with the same things DIRECT founders were and that the leaders of the renewal had been pushing since the 1970s for the kinds of work that DIRECT does. They also demonstrate the consistent use of language of evangelization, conversion, personal relationship with Jesus, and a complicated relationship with evangelical Protestants—all of which contribute, I think, to the ferment around the origins of DIRECT.

More structurally, one of the things I looked at in the Notre Dame Archives is the later history of the CCR, when participation began to decline and the institutions supporting the renewal were struggling. From these sources, I learned that part of this had to do with the struggle to make sure they were Catholic enough. I think this theme of what counts as Catholic identity, especially following the Second Vatican Council, lingers in contemporary Catholicism. And it matters to me that members of the CCR were struggling with this. The other thing I learned in the archives was the strong language of concern over the next generation. In the documents I examined, there is much concern about how to protect teens from sex, drugs, pornography, and over-consumption of media.

CO: In your research proposal you also mentioned an interest in the finances of the missionary organization. What have you been able to find in the archives on the network of parish financial support that makes this work possible? Which kinds of parishes are supporting these evangelization efforts, and do you see any patterns beyond their social location in upper middle class suburbs? For example, I’m curious if parishes with a historic connection to certain religious orders are more likely to support efforts related to the Charismatic movement, or if parishes with a strong history of anti-abortion activism are more likely, or if there’s some other kind of unifying pattern.

KD: I have to admit that I had hoped to find more on this, but ended up devoured by CCR and Franciscan University of Steubenville records instead. What I do know from my ethnographic work is, as you suggest, that it ends to be suburban, majority-white parishes (not unlike those where the CCR flourished through the 1980s). Your question about the anti-abortion activism is spot-on because one of the political implications of this work (and something I hope to turn to in my next project) is the way the pro-life movement intersects with these missionaries’ work. One of their subprojects is partnership with the Sisters of Life, an order of religious women started by Cardinal John O’Connor of New York in 1991. The two organizations work together to provide college-aged women with adoption services, as well as crisis pregnancy support.

CO:  What other archives are you using as you expand this part of your research? What kinds of documents would you like to find that you haven’t been able to find yet?

KD: I have been lucky enough to access some online archives of DIRECT’s original parent organization as well as the USCCB documents on Catholic higher education and evangelization. Missionaries have also shared their newsletters with me, which has constituted an informal archive! I would love to find documents written between campus ministers about DIRECT or additional reports from Newman Centers on their relationship with DIRECT.