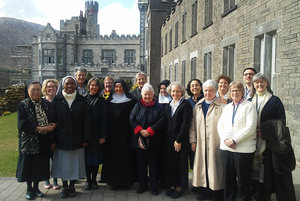 “Pedagogy of Peace: The Theory and Practice of Catholic Women Religious in Migrant Education,” sponsored by the Cushwa Center, took place March 14–17, 2018, at Notre Dame’s Kylemore Abbey Global Center. The group of 16 participants included historians, librarians, teachers, and those who minister “on the ground” to migrants and refugees throughout the world.

It is appropriate that “Pedagogy of Peace” took place at Kylemore Abbey. The Benedictine community at Kylemore was founded at Ypres, Belgium, in 1665 to provide education and a religious congregation for Irish women at a time when the Catholic Church in their country faced persecution. The Abbey at Ypres was destroyed during World War I (1915), forcing the Benedictine Sisters to leave Belgium and make their way to Ireland. The sisters first arrived at the Abbey as migrants themselves in 1920.

The conference formally opened with an address by Phil Kilroy, R.S.C.J., “Pedagogy of Peace in a Time of Revolution, Empire, and the Nation State: The Sisters of the Sacred Heart in France, 1779–1865.” Kilroy deftly set the stage for the remainder of the conference by reminding those present that the Society of the Sacred Heart originated from women migrating within France as a result of the French Revolution. Most, if not all, of these women had lost family and money as a result of the conflict. Like migrants today, they had to try to recreate their lives and find a new home. The early years of the Society were marked by war and the trauma resulting from that war, Kilroy reminded the participants, not unlike the situation in Syria today.

Katharine Massam, a member of the faculty of Pilgrim Theological College (Australia), offered the second historical perspective with an address entitled “Towards a Theory of Practice: An Overview of Catholic Women Religious and Migrant Education since 1760.” Noting that Christian missionaries of the early church can be considered migrants, Massam went on to explain that many congregations share a heritage of either the migrant experience or working with those who have left their country of origin. Religious sisters as well as those to whom they minister have been transformed by this experience. Massam challenged the long-held distinction between activism and contemplation. Scholars often assume that women religious must be placed into one of these two categories, but her research shows that contemplation inspires and structures activism.

The first of two panels was convened on Thursday afternoon. Facilitated by Maggie McGuinness (La Salle University), “Education Embodying the Charism” consisted of three presentations. Sister Mary John Mananzan, O.S.B., described the ways in which Benedictine sisters living and working in the Philippines have developed ministries to migrants, including a center for migrant workers; a day care center in Rome for migrant children; pre-departure seminars for those planning to leave the Philippines in search of work in other countries; and education in migrant issues—including human trafficking—for students attending Benedictine schools. Students in Benedictine schools in the Philippines, Sister John said, are expected to be agents of change and to embrace the idea of the preferential option for the poor, a major component of Catholic Social Teaching. 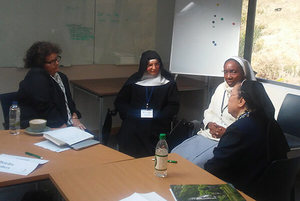 Sister Caroline Mbonu, H.H.C.J., discussed the role her congregation has played in migrant ministry in Africa. Founded by Mother Charles Magdalen Walker, the Handmaids of the Holy Child Jesus are an African congregation canonically erected in 1937. The migrants with whom the sisters worked (and continue to work) were indigenous children in the school founded by the community. Today, St. Joseph Convent School is recognized as one of the best educational institutions in West Africa.

The work of the Society of the Sacred Heart in migrant education was the topic of the third presentation. Sister Dolores Menendez, R.S.C.J., explained that one way in which her community has responded to the “signs of the times” has been through its work with migrants, especially women and children. The sisters conduct formal programs of education in refugee camps, sponsor five welcome centers for migrants in Spain, and serve as lawyers working with church-related organizations focused on undocumented men, women, and children in San Diego. Even retired sisters, Menendez noted, have participated in this ministry by teaching new languages to immigrants.

A second panel took place on Friday morning. Facilitated by Deirdre Raftery (University College Dublin), three sisters shared their experiences working with migrants throughout the world. For Patricia Godoy, M.S.C., her congregation’s work has always focused on migrants. Founded by St. Frances Xavier Cabrini, patron saint of immigrants, the Missionary Sisters of the Sacred Heart work to provide students with an “education of the heart,” while remaining dedicated to the needs of immigrants in the United States as well as Latin America, Africa, Europe, and Australia. According to Sister Patricia, the importance of education cannot be overstated because it changes the mentality of students.

Jacqueline Leiter, O.S.B., (St. Paul’s Monastery, St. Paul, Minnesota) described her experiences teaching bilingual classes in the St. Paul school system. Leiter explained that her work with migrant students has deepened what the Benedictines call conversatio, fidelity to the monastic way of life. Her work with the children in St. Paul also allows Leiter to practice the Benedictine tradition of hospitality. All guests are to be welcomed as if they are Christ; working with refugees is a way for her to incarnate hospitality.

The third presenter, Florence de la Villeon, R.S.C.J., is involved with the Migrant Project at the Union Internationale des Supérieures Générales (UISG). The project is staffed by ten women religious representing eight congregations, all of whom minister to those hoping to settle in Italy. Today, one person in seven is considered a migrant, de la Villeon reported, and this means that there is a great deal of work to be done in this ministry. The sisters work to stop human trafficking—namely prostitution—by sponsoring centers that help migrant women find paid employment. In addition to working on issues related to helping Italy’s newcomers attain the basic necessities of life—30 generalates, for example, have opened their doors to shelter migrants—the project also focuses on helping them to find joy in living. Migrants go through a time of frustration and disillusionment, she explained, and developing friendships with them can help them experience happiness again. 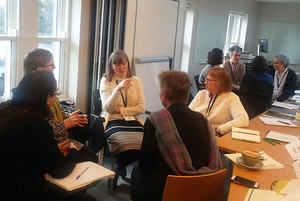 Participants were given a chance to reflect on what they were hearing twice during the proceedings. Both sessions were facilitated by Jane Kelly, I.B.V.M., a Sister of Loreto from Australia. Each participant was given time to share these reflections with a small group. Topics that emerged include: issues related to consumerism and migrants; the role of the historian in this conversation; the need to address relevant issues of violence; and the need for religious congregations to find common concerns and consolidate resources in the area of migrant education.

Barbara Quinn, R.S.C.J. (Boston College) provided the conference’s closing keynote, “Crossing Borders of Lands and Hearts,” dealing with two themes: (1) the perception of the migrants’ situation; and (2) how Catholic education can address this phenomenon. Quinn stressed the necessity of empathizing with migrants and their host countries. We are called, Quinn stated, to the “audacity of the improbable.” As we try to become like Jesus, we will come to look, feel, and act like Jesus.

Those who attended the meeting were heartened to know that many others are walking with them on their journey and to learn how many different ways women religious are involved in migrant education. “Pedagogy of Peace” was a very small, first step in what participants hope will be a long and sustained conversation leading to further action.

Margaret McGuinness is professor of religion at La Salle University.