The Seminar in American Religion met at Notre Dame on Saturday, October 27, 2018, to discuss David Hollinger’s newest book, Protestants Abroad: How Missionaries Tried to Change the World but Changed America (Princeton University Press, 2017).  At the heart of Hollinger’s book is a story about how missionaries and missionary-connected individuals profoundly shaped public life in 20th-century America. 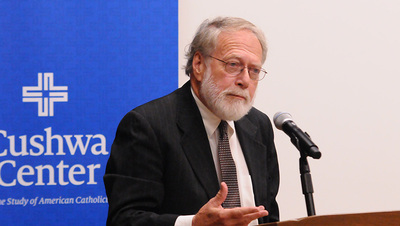 David Hollinger is the Preston Hotchkis Professor of American History (emeritus) at the University of California, Berkeley. Well-known for his studies of U.S. intellectual history and religion, Hollinger served as the president of the Organization of American Historians (2010–2011), is an elected fellow of the American Academy of Arts, and has served as trustee for the National Endowment for the Humanities. He is also a past Guggenheim Fellow, a Fellow of the Center for Advanced Study in the Behavioral Sciences, a Member of the Institute for Advanced Study, and has served as the Harmsworth Visiting Professor of American History at the University of Oxford.

More than 60 people turned out to discuss Hollinger’s book. The Saturday morning seminar began with a panel discussion that included Hollinger, R. Marie Griffith, and Rebecca Tinio McKenna. Griffith is the John C. Danforth Distinguished Professor of Religious Studies at Washington University in St. Louis, where she directs the John C. Danforth Center on Religion and Politics. Tinio McKenna is assistant professor of history at Notre Dame and the author of American Imperial Pastoral: The Architecture of U.S. Colonialism in the Philippines (Chicago University Press, 2017).

Tinio McKenna opened the morning with commentary focused on Protestants Abroad’s contributions to U.S. social and cultural history, as well as the U.S. in the world. She began with one of the central concerns of these fields: the extent to which “the foreign and the domestic have shaped each other.” She noted that Hollinger’s “account gives us new approaches to old problems” and unites periods of history that those studying the U.S. in the world or diplomatic history often treat as separate. The book also provides new direction in the history of 20th-century development and modernization. Perhaps surprisingly to many readers, white, mainline Protestant missionaries “came to act on a set of commitments to anti-imperialism and anti-racism.” Such a finding, Tinio McKenna said, reminds us that “Protestants have not always been a party to Christian nationalism,” a worldview often associated with Cold War figures such as John Foster Dulles. Dulles’ Protestant worldview, as Hollinger notes and as Tinio McKenna pointed out, was not the only brand of Protestant internationalism. Tinio McKenna concluded her remarks by applauding Hollinger’s work for opening new avenues of historical exploration and by calling for greater attention to non-elites, indigenous peoples, and those on the receiving end of missionary endeavors. 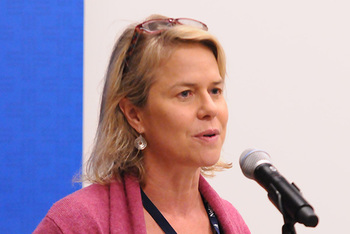 Griffith opened her comments saying, “Protestants Abroad is an absolutely stunning book. Full stop.” Griffith praised the book both for its scope and its astonishing story. Across professions ranging from government to academia to the arts, leader after leader that Hollinger considers either served as part of a missionary project or was the child of missionaries. The story of how missionary endeavors impacted 20th-century luminaries such as John Hersey and Pearl Buck will be, for most readers, a revelation. In addition to her overwhelming praise for the book, Griffith observed several notable absences from Protestants Abroad, including former missionary and celebrated academic, Houston Smith. She also challenged Hollinger on the subject of Catholic missions. “What about Catholics?” Griffith asked, “Where do Catholic missionaries and Catholic children fit into this story?” One of the book’s most discussed claims was that evangelicals did not develop the same type of cosmopolitanism that their ecumenical peers did. Griffith and others encouraged Hollinger and those historians who will follow in his footsteps to consider further the complex case of evangelicals.

Griffith concluded her comments with a personal anecdote that demonstrates the continuing impact of the lives at the center of the stories in Protestants Abroad. David Hackett, a close friend to Griffith, is a professor of American religious history at the University of Florida, and the son of one of the missionary children in Hollinger’s book. In a recent email exchange with Griffith, Hackett noted that at a class reunion, many of those gathered had read Protestants Abroad. “Though not quite their story, we had quite a few conversations reflecting on its resonance of what we knew of the earlier generations.” Although Hackett’s father “shed the religious language and rituals,” like many of those in Hollinger’s book he continued to demonstrate a “strong moral integrity and serious engagement with ideas.” “It is so fulfilling,” Hackett wrote, “to see what was family history become connected with the larger American and global history.” Hackett’s personal encounter with Hollinger’s book echoed many of the experiences shared by the audience.

Hollinger began his response to Tino McKenna and Griffith by noting that he hoped that the book would provide “all sorts of openings for new things.” He welcomed and encouraged future scholars to pick up the things his book left out. Hollinger also observed that many editors might think of his book as one for people interested in missionaries, when in truth, it “is a book for people who are not interested in missionaries but should be.” Hollinger acknowledged that he might have done more with individuals such as Houston Smith, as Griffith suggested. He also responded to her call to recognize the complexity of evangelicals. Hollinger shared that early in his research, he expected to find more evangelicals making their way toward the type of cosmopolitanism embraced by many ecumenicals. Overwhelmingly, however, Hollinger did not find many cases. He agreed with Griffith that more research needs to be done on evangelical cosmopolitanism and challenged those in the audience to take the lead in this area of research.

Lively audience engagement with the author and panel is a trademark of the Seminar in American Religion, and October’s gathering did not disappoint. Numerous audience members raised important questions and reflected on their own encounters with the missionary experience. Thomas Tweed (Notre Dame) asked members of the audience to consider the boundaries of public life. Hollinger responded that he understands public life fairly straightforwardly—in terms of churches, ecclesiastical organizations, universities, and other such institutions. Andy Mack (Notre Dame) asked Hollinger what he hoped nonacademic readers would take from the book. Hollinger responded that he hopes readers will be reminded of the need to engage “as much of the world as possible.”

Thomas Kselman (Notre Dame) asked about the religious evolution of the individuals in Hollinger’s book. Hollinger answered that often an individual’s religious evolution depended on where they began with regard to education. Many experienced a “turn” after they began their first missionary encounter. Education, Hollinger found, played a key role for many former missionaries and missionary children. For individuals such as Kenneth Landon and John Hersey, secular humanism, combined with their experiences abroad, ruptured their faith. What emerged was a sort of moral compass deeply influenced by their earlier religious identity.

Much of Hollinger’s career has centered on the importance of reinserting the study of religious history into the historical profession. Protestants Abroad is the culmination of those efforts. The book has, as Griffith noted, been almost universally celebrated by religious groups and historians alike. It is a book that, in Griffith’s words, “will be generating conversation and contemplation for years to come.” But it also challenges us to rise above our own provincialism, to continue to try to answer, as Hollinger puts it “the morally developmental question of just what conditions have promoted and enabled the diminution” of racism, sexism, imperialism, and xenophobia. Hollinger’s achievement here, then, is not just an academic one, it is also a moral one.

Maggie Elmore is a postdoctoral research associate at the Cushwa Center.