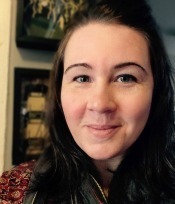 Jennifer Callaghan is a doctoral candidate in religious studies at Northwestern University. She received a 2015 Research Travel Grant from the Cushwa Center to support archival research for her dissertation, “Critical Mass: The Fall and Rise of Latin in the Long U.S. Catholic Liturgical Moment.” She spoke with Heather Grennan Gary about her work.

What first brought you to the Cushwa Center?

When I started writing my dissertation prospectus, it became clear that the archives at Notre Dame had a number of collections I’d need to look at. Poking around on the Archives website led me to the Cushwa Center. Cushwa also sponsored a conference a few years ago on the Lived History of Vatican II, and I ended up submitting—and presenting—a paper I’d written on the Archdiocese of Seattle. One of my first memories of that conference is how great the coffee was; I remember thinking I should stay involved with Cushwa if it meant more of that coffee.

Tell us how you landed on the subject of your dissertation.

I’m interested in the question of language and the liturgy. For U.S. Catholics in the 20th and 21st century this means looking at a number of different conversations, though the main thread is the switch from Latin to English in the mid-1960s. One of the things I find most interesting is how that became the main thread, and how privileging it influences the way we tell the history of American Catholicism. So, a few different questions organize my dissertation: How did reformers understand liturgy to act within the spiritual and social lives of American Catholics throughout the liturgical movement? How did the vernacular Mass come to represent the fulfillment of that movement for many Catholics and non-Catholics, especially in the years after Vatican II? How did implementing a fully vernacular Mass create a new kind of relationship between American Catholics and their liturgy? How did the Latin Mass emerge as a category of Catholic identity, and what work did that do for defining American Catholicism after the Council?

One of my earliest interests was the way U.S. religion and U.S. politics shaped one another’s language and narratives. When I looked at work being done on U.S. Catholics, I noticed that the category of “conservative” bounced between “religion” and “politics” in really interesting ways, and that the category was often associated with the Latin Mass. I wanted to get a really nuanced sense of how that happened, and what else that process might suggest for the narrative about Catholics after the Second Vatican Council.

So, I originally started with an interest in “the Latin Mass” (either “extraordinary form” or novus ordo), but that interest has broadened. One of the things I’m really drawn to in this research is the transition from “vernacular in the liturgy” to “a vernacular liturgy” that took place in the mid-20th century, so I’m also interested in putting the question of “the Latin Mass vs. Latin in the Mass” into conversation with the question of “the vernacular Mass vs. vernacular in the Mass.” And while I’m focusing on the Mass, because I think the idea of public worship is a really interesting and complicated one, I also want to look at the reforms in context—and liturgical reforms involved a much larger landscape than simply the mass.

Who are some of the central characters in your dissertation?

I look at a few different liturgical projects, so there are a number of different groups that I work on. Some of my work focuses on the Archdiocese of Chicago’s Liturgical Commission, tasked with overseeing the implementation of Vatican II liturgical reforms. One of the main collections at Notre Dame that I’ve been using is the Vernacular Society records—these are papers documenting the history of an organization that advocated for “vernacular in the liturgy” starting in the late 1940s and worked on that up until the mid-1960s. There are a few individuals who help me link the various projects together, like Dr. Joseph Evans who was a member of the Vernacular Society and later the Chicago Liturgical Commission, or Fr. Frederick R. McManus, who was very involved in the liturgical movement and helped coordinate the reforms at the national level.

The Demonstration Mass is an intriguing part of your research. Who used it, what was it for, how widely and when was it in use, and what happened to it?

The most extensive use of a Demonstration Mass program that I’ve found occurred in Boston in the early 1950s. These programs were part lecture, part performance—a few were paired with a short play as well. One person would ‘act’ the part of the celebrant: facing the audience, he would go through all the motions of a priest at Mass and say all the parts of the liturgy out loud and in English. Another person would be a commentator, explaining what was going on. Both the orientation and language were billed as conceits, as ways to get the laity to better understand, and then better participate in, Masses where the priest faced away from the people and the liturgy was in Latin. So, English served a very different purpose here than it would 20 years later. I’ve seen references to other Demonstration Masses as well, but nothing quite as comprehensive as the Boston campaign. By the early 1960s, there were a number of Demonstration Masses conducted to help prepare people for the new Mass format. Here the purpose wasn’t to teach people how to participate in the Mass as it had always been, it was to teach them the new ways they’d be participating in the Mass going forward.

What collections at the Notre Dame Archives have been most useful for your research?

I’ve spent most of my time so far in the Vernacular Society papers—and haven’t even begun, really. It’s such a rich collection. When I’m finished there, I have a number of things to look at in the ICEL (International Commission on English in the Liturgy) and ELLC (English Language Liturgical Consultation) Records, the Liturgy Conference Records, the Michael A. Mathis Papers—honestly, I could probably do nothing but look through the Notre Dame Archives for the next several years. There’s also a collection on an experimental parish set up by the Archdiocese of Chicago, the San Miguelito Mission, where questions of language and liturgy come into play.

Tell us a little about the recordings you’ve discovered. Who made them, what format are they in, what kind of information are they able to convey that you don’t get from other materials?

One of the first things I found at the Archives was a series of recordings made by the Liturgical Conference. These are tape reels on which Masses (or, in one case, a Demonstration Mass) were recorded. You can hear the celebrants and congregations answering one another, in some English and some Latin; you can also hear the rustling and moving of objects. It’s an incredibly interesting and new way for me to think of the Mass. Without visuals, I find myself thinking a lot more about the sounds—about accents, and instrumentation.

What have been the most enlightening materials you’ve discovered in your research so far?

I’ve become really charmed by the administrative moments. By what people do at meetings (the parts that get recorded in meeting minutes, anyway) and the bureaucratic processes they create to complete their projects. In Chicago, for instance, in the late 1960s, the Archdiocese had an application for use of the guitar during Mass. Quite a few of those applications are still in their archives, and you get a really interesting window into that world by reading both the applications themselves and what the people reading those applications thought about them.

The University of Notre Dame Archives