HGG: Tell us about the topic of your dissertation. 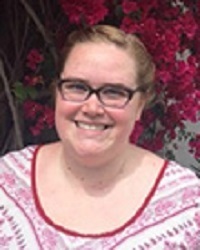 HGG: What led you to this topic? And why Catholics and Shakers?

AG: I have a longstanding interest in issues around the intersections of religion, race, gender, and sexuality. My interest in celibacy in particular came out of reading Benjamin Kahan’s book Celibacies, where he argues that celibacy has been largely ignored in studies of sexuality, or assumed to just be a lack­—­whatever’s left over when you subtract sex. I began to think about this in conjunction with a figure I was interested in (The Publick Universal Friend, a religious leader previously known as Jemima Wilkinson), who was celibate and who encouraged it for her followers. Eventually this snowballed into being a broader project about race and celibacy in 19th century American religion. I became interested in looking at Catholics and Shakers because they each stood outside of the period’s Protestant mainstream, and each had some form of prescribed celibacy.

HGG: The focus on celibacy and race seems to be a very small subset of 19th-century U.S. religious history. How much archival material have you been able to find? Has it been more or less than you expected?

AG: So far, there’s not necessarily a ton, but there’s enough for me to work with. The main thing is just doing a lot of careful skimming. Even if something is digitized, I can’t just search “celibacy” and expect a gold mine to come up­. People may be using very different language to talk about these things, so I have to keep my eyes peeled.

HGG: What have been the most useful collections at the Notre Dame Archives for your research? Have you uncovered any surprises along the way?

AG: It’s really been fantastic to be able to use Notre Dame’s archives for this project, due to their sheer scope. I spent a lot of time with the Archdiocese of Baltimore collection, as well as collections related to the Josephite Fathers and the Oblate Sisters of Providence. The element of surprise is one of my favorite parts of archival work. All kinds of things can pop out at you when you’re skimming a letter and not particularly expecting it. One particularly sobering moment came in reading a letter from a priest to Archbishop James Whitfield in the late 1820s. Among other parish business, the priest mentioned that a man in the parish had been married for some time, but his wife had been sold away at some point. The man had since met another woman and hoped to remarry, and the priest was inquiring as to whether the previous marriage should still be considered valid. I was obviously aware of the impact of slavery on many personal relationships, and many religious traditions struggled with what to do with its impact on marital relationships in particular. But there was something particularly gut-­wrenching about seeing it written so plainly in someone’s actual handwriting, rather than in the more abstract fashion we usually encounter in scholarship. ­

HGG: Where else are you doing archival research?

AG: It’s currently up in the air­­. I am definitely hoping to go to Baltimore at some point, and there will probably be some other East Coast and Midwest stops for various Shaker-­related collections. More and more things are digitized all the time, so we’ll see what kind of impact that has on my research, as well!

­HGG: How differently (or similarly) was celibacy understood by Shakers and Catholics?

AG: American Catholics in the 19th century saw celibacy as something undertaken by priests and religious, while others were supposed to marry and have children. Shakers, however, believed celibacy should be practiced by all. They saw it as part of their overall goal of imitating Jesus and to become like him. There was also an apocalyptic note to Shaker celibacy­: The end of the world was coming, so why should you marry or have children?

­HGG: How differently (or similarly) was race understood by Shakers and Catholics? Was race a bigger consideration in one group or the other?

AG: It’s hard to make a direct comparison, since you’re talking about one group that peaked at a few thousand members, located only in the United States, versus a much, much larger group with a worldwide presence. In the United States, Shakers were largely known for their racial inclusivity, although they were kind of standoffish about subjects like slavery, which they saw as a governmental issue that they weren’t really interested in. (It’s worth noting that some African American Shakers were on the record as feeling frustrated with this general stance). American Catholics, like members of many other religious groups, often wrestled with social ideas about racial inferiority, etc. as opposed to religious ideals of God loving all, and so forth. During my recent research, reading African American newspapers from the 19th century, Catholics were often depicted as being unusually open to integrating African American children into their schools and churches. Interestingly, this was seen as threatening by some African American Protestants, who saw Catholics as degenerate and even evil.

HGG: Can you remind me where you are in the research/writing process?

AG: I am at the beginning stages of my research­­. I will be submitting and defending my dissertation proposal sometime this fall [and expect to complete the dissertation during or after spring 2018].

Addendum: In a follow-up note, Alexandria recently said this about her research as it focused on the dissertation itself.

AG: I’ve honed in on thinking about biopolitics and subjectivity—what subjectivities were African Americans who participated in these religious traditions trying to cultivate? How did they coincide or differ from those of their white counterparts given different attitudes toward marriage, especially in the context of slavery?