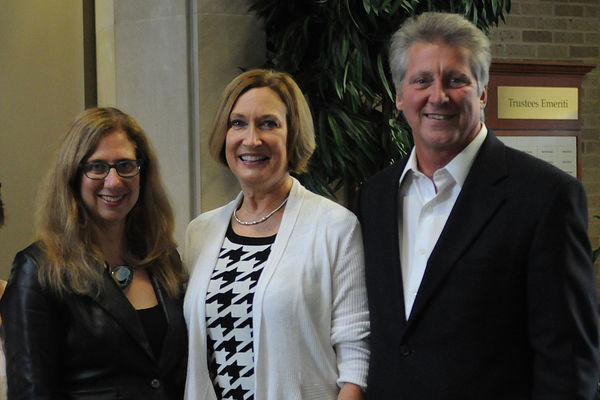 On September 27, the Seminar in American Religion discussed Paula M. Kane’s Sister Thorn and Catholic Mysticism in Modern America (University of North Carolina Press, 2013). Kane, a longtime friend and collaborator of the Cushwa Center, holds the John and Lucine O’Brien Marous Chair in Contemporary Catholic Studies at the University of Pittsburgh with a joint appointment in the Department of History. Her research interests within American religious history include modern Catholicism, gender, art, film, and architecture. Her many publications include numerous book chapters and articles, along with Separatism and Subculture: Boston Catholicism, 1900-1920 (University of North Carolina Press, 1994) and her co-edited collection Gender Identities in American Catholicism (Orbis, 2001). 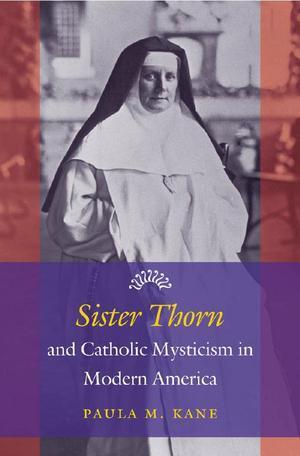 In Sister Thorn, Kane discusses the life and afterlife of a “failed saint and possibly a false stigmatic,” arguing that the life of Margaret Reilly (Sister Mary Crown of Thorns) “reveals American Catholicism in a transitional moment between the urban immigrant church of the 19th century and the assimilated one of the mid-20th.” (1) She argues for the utility of a “hybrid” approach to Reilly; many aspects of Sister Thorn’s life are shrouded in mystery due, among other things, to gaps in the archival sources, and Kane hopes “to encourage historians of religion to consider the utility” of the insights of critical theory, specifically of psychoanalytical and anthropological approaches to the study of mystical phenomena. (11) Mary Ellen Konieczny, assistant professor of sociology at the University of Notre Dame, and Ron Hansen, the Gerard Manley Hopkins, S.J., Professor in the Arts and Humanities at Santa Clara University, responded to the book.

Konieczny, the author of The Spirit’s Tether: Family, Work and Religion among American Catholics (Oxford, 2013), brought her insights as a sociologist concerned with matters of religion and gender to bear on her reading of Sister Thorn. She began by praising Kane’s work for its insight into this complex and “captivating” story, and remarked that “like most good scholarship. . . this book prompted more questions than it answered.” While affirming Kane’s use of critical theory for the study of history, Konieczny wondered how Kane understood herself as a scholar in relationship to the theory she used: Were the insights she gleaned from, for example, Lacan primarily of interpretive use, or did she see these insights as linked to a project of social change, as many critical theorists do? Following from this, Konieczny asked how Sister Thorn’s story might be “culturally significant for you and perhaps for those in similar social locations, for example, for contemporary American Catholics or for Catholic women.”

Konieczny went on to raise a substantial question about one of Sister Thorn’s major concerns: the reformation of religious life in the early 20th century. She wondered, given data on rising vocations at this time and their links to American Catholic class mobility, which types of groups among Sister Thorn’s listeners would have been especially receptive to this message? Although Kane addressed this question briefly in the book, Konieczny wondered if there might be more information available about the laypeople, priests, and religious that heard her messages of reform that might shed further light on concerns around vocation and religious life in the period.

Finally, Konieczny raised the question of Kane’s use of critical theory, asking if she could have reflected even more explicitly on the question: “How was Sister Thorn—as a woman, a religious sister, and a stigmatic—located in the power relations in which she was situated? In the final analysis, was she powerful or powerless? How might she have been powerful or powerless, and why?”

Konieczny observed that second- and third-wave feminism might react quite differently to Thorn’s story. She suggested that one theorist who went unmentioned in Kane’s work—Judith Butler, who draws on the work of Michel Foucault—might be useful in approaching these broad questions about power. Konieczny suggested that Butler’s description of marginal people, “abject figures” with “abnormal bodies,” is useful in understanding Thorn’s power. It was her very marginality, as a woman whose life was publically and privately defined by pain, that allowed her to make “an exercise of power, of creative agency, within a highly constraining system of power relations . . . where individuals usually . . . reinforce at least some aspects of those relations through the citation of norms.” Thorn’s abjected body made her—a cloistered woman—a public figure with an audience of clergy, women religious, and laity; her exercise of this power within the many constraints of her position deserve analysis from a Butlerian, and Foucauldian, point of view. 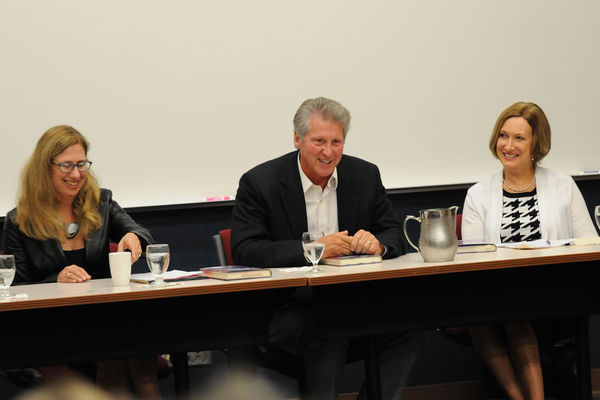 Hansen, who, as a novelist, is the author of Mariette in Ecstasy (Harper Perennial, 1994), about a stigmatic nun in turn-of-the- century upstate New York, also began with praise for Kane’s work. His questions for Kane revolved around three topics. First, Hansen wanted further discussion on the primitive state of medicine during the early 20th century. He shared that he set Mariette in 1907 specifically to keep it in a pre-Freudian time; he did not want a psychiatrist to examine the novel’s main character, but he was struck by the fact that Sister Thorn never seemed to be visited by a psychiatrist. He also wondered if Thorn wrote an autobiographical document, which may have provided clues as to what mental illness may have afflicted her. (Kane said it was not clear if that document existed; she was never given access to a document like this, nor was she led to believe it existed.) Second, he questioned the authenticity of Sister Thorn’s status as a mystic. “Mystics usually disrupt our world view,” he said. “But the revelations she has, the messages she shares, were kind of trite.”

And finally, he was struck by how Kane was able to portray her subject as both a sympathetic figure—one who struggled with mental and physical illness—and as an ominous figure—one who was extraordinarily manipulative of the people and community around her. 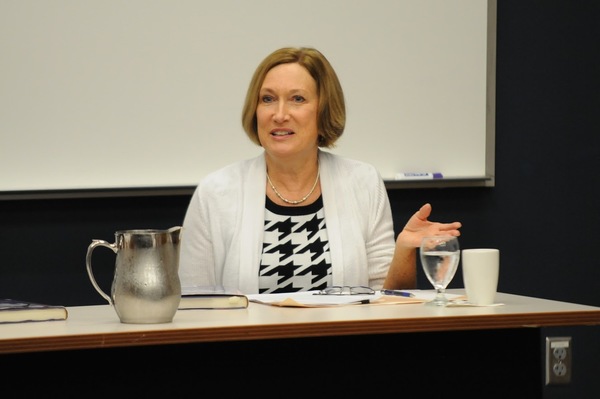 After thanking Kathleen Sprows Cummings for organizing the discussion of her work, Kane briefly addressed Konieczny and Hansen’s comments. While promising to speak more on critical theory later in the discussion, she turned to the book’s setting, discussing the “thin tradition” of Catholic mysticism in the United States (compared to its active and activist dimension), which is nevertheless revealed to have been vibrantly present in the large group of Catholics who took up Sister Thorn’s cause. She noted that historians are currently engaged in a project of pushing back the beginning of the Vatican II reforms of liturgical and devotional life. There were Catholics who made a relatively seamless transition from mystical, pain-soaked piety invested in stigmata and other mystical phenomena, to a different type of mystical and devotional life centered on accompanying the poor; Sister Thorn was not one of the people capable of making that transition.

Seminar participants then embarked on a lively back-and- forth over the book’s themes and methods. Peter Williams began the discussion by invoking Joseph Smith, wondering if a comparative approach to prophecy and revelation in American life might be of service. He wondered how historians can categorize the truth claims being made by Smith, Reilly, and other mystics. If the U.S. is a place where messianic time is happening (Smith’s claim), is that related to Kane’s claim that in Sister Thorn we see part of how Americans tackled the World War I-era question of how to see pain and death as meaningful? Kane responded that in part because of the paucity of sources in Thorn’s own words, she was more concerned with looking at the narrative of sanctity that arose around Thorn, how she was received by both skeptics and believers. Thomas Kselman continued with the theme of the American context, wondering whether Catholics were embarrassed by her; how important or central was she for the Catholic culture of the 1920s in general? Some discussion ensued on the question of mysticism as the underside of Catholicism in some ways—having revelations that can be upsetting to the more bureaucratic hierarchy.

Substantial discussion also tackled questions of gender, power, and pain. Una Cadegan located Thorn between first and second-wave feminism and suggested we might need a new language for women’s strategies of power in this intervening period. Thomas Tweed suggested that perhaps Thorn and others like her represented a kind of wresting away of the power of redemptive suffering from the (male) priesthood. Kathleen Cummings and Sam Thomas both raised the question of how Thorn’s suffering related to that of the majority of Catholic women, mothers and wives whose suffering was largely linked to the experience of marriage and childbearing, and Jeanne Petit responded that perhaps the idea of spiritual suffering was part of a broader Catholic response to the emerging feminist movement (as represented, during the first years of Thorn’s stigmatization, by Margaret Sanger.)

Anthony Smith opened a discussion of the city and modernity by noting that Kane’s work located Reilly both inside and outside of New York’s developing streets and culture. The book, he suggested, is important in part because it reminds us that not everybody is experiencing modernity in the same way; modern cities were places where the senses were being reorganized, but Reilly had her own geography, with her senses directed to parishes, procession routes, and so forth. Catherine Osborne commented that these Catholic relationships to the city involved the power of secrecy displayed later in Thorn’s story; Catholics (including Reilly) rode the same trams and walked the same streets as everyone else, but they carried hidden items (like the Sacred Heart badges Reilly sent out) that gave them the power of knowing things others did not. Karen Park noted that postwar Marian mystics like Veronica Leuken also engaged their location in the city to show the powerful presence of the divine.

Discussion closed with an exchange between John McGreevy and Kane; McGreevy suggested that the book articulates a dense, shared, transatlantic Catholic culture in the period before Vatican II, with the flow of ideas and practices moving not just from Europe to America, but back in the opposite direction. Kane concurred that the denseness of Catholic culture was not distinctly American, and argued again that World War I represented a major interruption of Catholic culture, requiring Catholics to rethink the question of what the passion of Christ meant, and how that related to understandings of the Eucharist.

For more on our Fall events, see the Spring 2015 American Catholic Studies Newsletter.