America’s Pastor: Billy Graham and the Shaping of a Nation 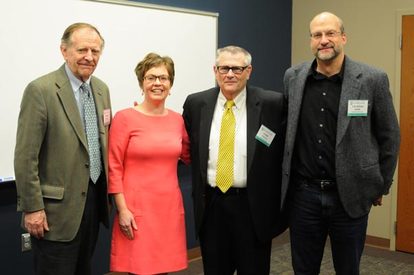 On April 11, the Seminar in American Religion discussed Grant Wacker’s biography of Billy Graham, America’s Pastor: Billy Graham and the Shaping of a Nation (Harvard University Press, 2014). An unusually large crowd of about 60 visitors packed the room in McKenna Conference Center and enjoyed a stimulating morning.

This year’s outside commentator was Richard Bushman (Claremont Graduate School), who began by praising Wacker’s “evenhanded” approach. Bushman said that America’s Pastor was an “evaluation as much as a biography” and described it as a “masterwork of empathy.” The focus of Bushman’s remarks, however, concerned Graham’s role in the political life of the nation. He maintained that Graham’s career represented a healthier blend of faith and politics than we find in the “toxic atmosphere” of the contemporary political landscape. To Bushman, Graham seemed to be a less partisan, more irenic figure than many of today’s politicos. The real question, he suggested, is “Why did not Graham father a compelling tradition” of healthy evangelical political engagement?

Bushman argued that a strict separation of religion and politics is impossible for serious religious believers; how can people leave behind their deepest commitments when they walk intothe voting booth? He warned, however, against the danger of blending faith commitments with political ones and suggested that Graham was not entirely aware of the dangers of doing so. When Graham used newspaper headlines to interest people in the gospel message, Bushman suggested, he ran the risk of conflating the secular, personal, and spiritual realms. Taken to an extreme, such a conflation can lead to “uncompromising” stances on political issues and the temptation to turn political differences into life-and-death struggles over ostensibly eternal principles. 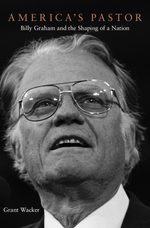 This year’s Notre Dame commentator was sociologist Christian Smith. Smith also praised the book, calling it “a masterful interpretation.” The first of his two main questions concerned Wacker’s methodology and assumptions. Smith pointed out that Wacker described Graham in different ways: Graham was lucky; he was the product of his time; he was the producer of his time; he was the voice of an era; and he was a barometer of his time. As a sociologist, Smith wanted Wacker to describe more fully the theory or model that was influencing his analysis. It could only help readers appreciate the work, he argued, for methods, theories, and models to be laid out explicitly.

Smith’s second question concerned Graham’s role in the promotion of the nuclear family. Smith drew on his own research to suggest that one of the major goals of evangelicals during the 1990s was to “build strong families.” He referenced the prominent role that James Dobson (head of Focus on the Family) and Edith Schaeffer (author of What is a Family?) played in the movement.

Smith wondered if Wacker had overlooked an important aspect of Graham’s ministry or if Graham had simply not addressed the family issue on a regular basis.

Wacker (Duke Divinity School) gave a brief response to close the first half of the seminar. Protesting that he needed some time to think about the excellent questions that Bushman and Smith had posed, he chose to address other matters instead. He began with a personal tribute to friends who had “formed” him, noting that four of them—George Marsden, Mark Noll, Richard Bushman, and Martin Marty—were in attendance that morning. He then told the story of the book’s genesis: Noll had suggested that Wacker write a book focusing on the “intersection” of Graham and the United States. Wacker, in turn, hoped the biography could tell us something about personal charisma, religion, and the United States. The book had two guiding questions: How did a farm kid from North Carolina achieve “Olympian status,” and how did this same man become a “lightning rod” for praise and criticism? His thesis—that Graham adapted cultural trends for his evangelistic purposes—provided the answer.

After a short break, James Turner (Notre Dame) started off a lively Q&A session by asking about Wacker’s choice of a topical structure. Wacker said that he couldn’t offer a better narrative than William Martin’s A Prophet with Honor (1991), and that patterns began to emerge in his research that led naturally to each chapter. Next, Natalie Sargent (Notre Dame) asked about the factors that led to Graham’s gradual softening over the years. In response, Wacker alluded to the importance of Graham’s world travel and his growing personal humility. 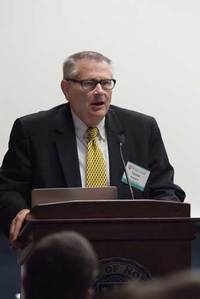 Returning to the commentators’ remarks, Tom Kselman (Notre Dame) asked Smith if he saw a particular theory at work in this biography. Smith said he did not, but he did see an assumption that a powerful individual can actually shape culture. Wacker then said that Graham spoke “for” and “to” Middle America, and that both of those words were important to keep in mind when discerning Graham’s social effect. A few moments later Kathleen Riley (Ohio Dominican University) asked about parallels between Graham and Bishop Fulton Sheen. Graham liked Sheen, Wacker explained and always called him a friend. Furthermore, Wacker continued, Graham drew flak from other conservative Protestants for working with Catholics and Mormons. Bushman pointed out that irenic clergy seemed to flourish around the 1950s, citing Graham, Sheen, and liberal Baptist minister Harry Emerson Fosdick as examples.

Mary Cayton (Miami University, Ohio) asked what women gained from Graham, given that his teachings did not grant them increased social prestige. Wacker maintained that while Graham was generally progressive on many issues, he remained more conservative on women’s roles. This was due to his wife Ruth’s influence on him. Since Ruth’s beliefs were quite traditional, Graham probably didn’t believe women needed “any special consideration.”

David Russell (pastor of Hilltop Lutheran, South Bend) asked about the differences between Billy Graham and his son Franklin. Wacker responded by quoting an audience member from a recent talk in Boone, North Carolina: “Franklin is Ruth’s son.” Wacker elaborated by praising Franklin Graham as a great humanitarian but acknowledged that, unlike his father, he gets drawn into controversial subjects rather easily. Tom Connor (Hillsdale College) wondered about the future of the Billy Graham Evangelistic Association (BGEA). Wacker noted that the BGEA is still flourishing, but was likely to “take a very different form” in the coming decades. Graham’s grandson Will, son of Franklin, is poised to take the mantle, and so far his attitude seems more akin to his grandfather’s than to his father’s.

Jan Shipps (IUPUI, emeritus) remarked on the ritual-like atmosphere of the Billy Graham crusades and asked about the extent to which Graham acknowledged that the events were “ritualistic.” Wacker said Graham wouldn’t like the term “ritualistic,” but pointed out that the evangelist did acknowledge that most crusade “conversions” were actually re-conversions. Above all, he insisted, Graham wanted to be “effective,” and the BGEA found out long ago what made for an “effective” crusade.

Finally, Kathryn Long (Wheaton College) asked about the experience of writing a biography of someone still alive. Wacker said that he had been warned, for objectivity’s sake, to stay away from Graham, whose charisma could still bias the historian’s judgment. However, Wacker said he wanted to meet Graham and experience the “power of this personality.” From all appearances, he has not regretted doing so.