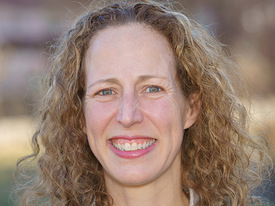 Susan Ridgely’s current work explores how white and black Catholics in the Diocese of Raleigh dealt with desegregation, and how the experience affected people at the time as well as in subsequent generations. Ridgely received a 2017 Research Travel Grant to visit the Notre Dame Archives for her project. She is associate professor of religious studies at the University of Wisconsin-Madison, and most recently the author of Practicing What the Doctor Preached: At Home with Focus on the Family (Oxford University Press, 2016).

Cushwa’s Catherine Osborne caught up with Ridgely in the spring during her research trip.

CO: It’s interesting to me that even as microhistory and ethnography have become thriving genres or subfields, parish history doesn’t seem to have acquired much academic respectability. Why do you think that is? And what do you see as the larger value of the close study of a single parish?

SR: I think to many people parish history seems institutional and therefore boring. In some ways, I like the constraints provided by the institutional focus. There are clear boundaries within which people must interact, and a clear community that they must try to hold together, whether they’re successful at that or not. My own approach moves from the laity up, but I appreciate that there are multiple forces at work as people try to make things happen. At the same time, laypeople can do many things under the umbrella of clerical authority. It turns out that the parish I’m writing about (now called Our Lady of Guadalupe) had been shared, black and white, if not integrated, from the 1870s until 1939. St. Benedict the Moor was created as the area’s black church when the Redemptorists took over running the parish. After that time, there were feast days and other moments when white and African American parishioners still worshipped together. So, many parishioners did not feel the churches were as segregated as the bishop or the press implied. Still, most did not want desegregation for a variety of reasons, ranging from obvious racism to an appreciation for the ways in which the segregated parish functioned as a means of social mobility for black parishioners in particular. They had a strong African American school, St. Francis, with funding through Mother Katharine Drexel, whose support seemed to make its way over to the white school in various ways as well. Graduates from this tiny farming community frequently went on to college or teacher training schools. At times the sisters at St. Francis would petition the bishop to help find funding to send students on for further education. Without the parish and the school, African American access to these kinds of resources would disappear. As Catholics, moreover, all the parishioners—not just those who were African American—were afraid of attracting the attention of the Ku Klux Klan. It’s important to remember that Catholics lived as both a minority and suspect group in the South to varying degrees. It’s a very complicated story that throws much of the broader history of the South, American Catholicism, and religion in rural America into relief.

CO: What’s interesting to you about the Bishop Waters letters you’re consulting? 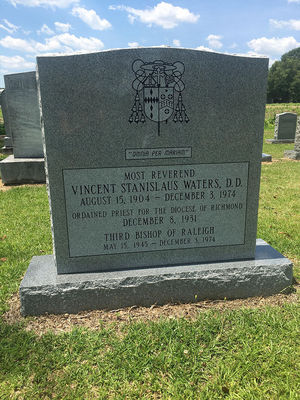 SR: I read a lot of the later correspondence between Waters and others with his handwritten comments. Lots of times he’ll put something more personal in his own handwriting. I now have a wider sense of who he is. The correspondence I just read deals with a group of sisters after Vatican II who want to dispense with habits while they’re studying at UNC and getting doctorates. He thinks the Church in North Carolina is a missionary outpost and people need to be able to recognize sisters. So, he says no. But he’s not writing directly to the sisters; he’s writing to a mother superior, and he writes in his own hand: I don’t know what to do, I don’t know how to deal with this, what do you think, how can you help? In the formal letter, he sounds very in control, but in the notes, he’s having side conversations with people and seeking help and support. He does like authority and he wants people to be submissive to the authority of the Church and the authority of God. He’s upset with white Southerners in the 1950s who won’t desegregate because they’re following their tradition rather than church dictates, and he’s also upset with the nuns in the 1970s who want to be liberated feminists.

CO: You mention that you plan to do some comparison to a much later parochial transformation. Can you broadly sketch the differences between the two situations? What other threads are you pursuing?

My question is for those folks who were kids—both black and white—in the 1950s during this “desegregation.” How did that experience affect them? For the white children, did it influence what happened when they had a chance at a kind of do-over as adults when Mexican migrants came to North Carolina in the 1990s and 2000s?

The hardest part of this project is trying to track down the African American parishioners, because most folks just didn’t stay. They scatter to other churches and often moved north, as part of the later stages of the Great Migration. The parish intregrated, but to a much lesser extent than it could have because of that. But my question is, what happened for those who left the Catholic Church and no longer had easy access to Catholic schools which often offered the best, if not the only, college preparatory education for African Americans (the parish closed both the black and white schools shortly after desegregation)? What were the generational effects of the bishop’s decision for all the families in the parish? And, in what other North Carolina parishes did this occur, if any?

While the bishop got a lot of kudos for this decision from outsiders, many black and white Southerners questioned the decision. They wrestled with their position in Southern culture. On the one hand, all Southern Catholics were working very hard to show their Protestant neighbors that they were not idolaters, but real Christians. White parishioners, I’ve found, often had family lore of the KKK terrorizing their ancestors. Meanwhile, outside of black parishes, African Americans had a triple burden of showing themselves to be authentically Catholic to one community, authentically Christian to another, and authentically black to a third. In the 1950s, North Carolina was 2% Catholic, so all Catholics are outsiders and black Catholics more so. Parishes were the safe places for all Southern Catholics. To attempt to integrate them by decree, as Waters did, seems to disregard this reality. My project briefly revisits this decision from as many sides as possible, not to second-guess it, but to highlight the ways in which it opened and closed opportunities for the young people of the parish and their children. How did parishioners navigate their lives in the Church and beyond given the constraints applied by the diocese?

Photos courtesy of Susan Ridgely. Regarding Bishop Waters' gravesite, Ridgely explained in an email: "His grave bridges the space between what had been the black and white sections of the cemetery. Behind and to the left of his grave are the graves of former slaves as well as other black members of the parish, and to the right are white members. Since his reburial there sometime in the 1980s, perhaps according to his wishes, it has become the final resting place for many diocesan priests."