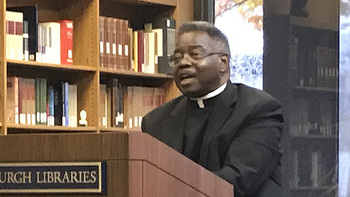 Father Clarence Williams became involved in the Black Catholic Movement as a seminarian in the 1970s. He experienced a “moment of consciousness,” he says, when he first read the manifesto of the National Black Catholic Clergy Caucus drafted in 1968. “The Catholic Church in the United States, primarily a white racist institution,” the statement read, “has addressed itself primarily to white society and is definitely a part of that society.” Deeply shaped by this revelation, Williams launched a career as a priest, civil rights activist, and administrator, and would play a significant role in the Black Catholic Movement. Significantly, Williams has led several important initiatives in Catholic communications, producing seven documentaries that have appeared on NBC, ABC, and cable television. His documentary work on the African presence in civilization, the Bible, and the early church has been distributed by the Vatican in English and French.

On November 7, 2018, Williams gave a talk at Rare Books and Special Collections in Notre Dame’s Hesburgh Library, reflecting on the 50th anniversary of the National Black Catholic Clergy Caucus, an organization Williams has served as archivist and vice president. He drew from his unique perspective as a scholar-activist and analyst-participant. As a seminarian, he attended early meetings of the National Black Catholic Clergy Caucus, including a gathering that took place at Notre Dame in 1970. He took his final vows as a member of the Missionaries of the Precious Blood in 1978 and became the first black priest ordained in the diocese of Cleveland. His November lecture traced the organization’s broad arc, as well as that of the broader Black Catholic Movement, and reflected critically on their successes and limitations.

Williams finds the roots of the Black Catholic Movement in the turn toward “self-identity” that took place in the 1970s. In the wake of the Second Vatican Council and the Civil Rights Movement, and in response to the notion that the Catholic Church was a “white racist institution,” black Catholics in the United States entered a period of reflection on their positionality. What did it mean to be both black and Catholic? How should black Catholics express their identity? Black Catholics, Williams recounted, suddenly found a “source of power” in their religion. They began to craft a specific group identity as black and Catholic, revolutionizing their self-image and, they hoped, their place in the institutional church. Black Catholic priests began to integrate objects and dances from Africa into the Roman Catholic liturgy.

Williams first traced a story of growth and extension. The Black Catholic Movement enjoyed a number of institutional victories: The National Black Clergy Caucus began in 1968; the National Black Sisters’ Conference started the same year; the National Black Lay Caucus launched in 1971; the Association of Black Catholic Administrators was born in 1976; in 1992 the movement achieved global interconnections with the founding of the Pan African Roman Catholic Clergy Conference; and by 1993 black Catholic deacons also formed their own association. The institutionalization of the movement can be seen on Williams’ own resume: after serving as a pastor of St. Anthony Church in Detroit—a parish engaging the black community and urban affairs—he served as Director of Black Catholic Affairs in the Archdiocese of Detroit from 1995 to 2007. Williams argued that bishops took organizations like these seriously and managed to include some of their platforms in official diocesan policies.

Williams contended that the Black Catholic Movement was more interested in inclusion in the church than protesting and denouncing injustice. The goal of the movement has always been to “share the gifts of black Catholics” with the church and the world. The Black Catholic Movement shifted its efforts, he argued, from “the outside to the inside.” They aimed to shape the institutional church itself—members of the movement could be seen at the forefront of official organizations and behind desks in the ecclesiastical bureaucracy.

Williams also reflected on what he called the “unexpected outcomes” of the movement. He raised questions about the Black Catholic Movement’s early decision to focus so intensely on identity. This move, he argued, led to a fissure between black and white activists, with the movement recruiting black activists almost exclusively. As a result, an unanticipated consequence has been a lack of integration in the movement itself; black Catholics are the only ones present at contemporary civil rights marches and in the movement’s associations. Rather than seeking grassroots integration, the movement focused on group identity and on inclusion at an institutional level. These preferences, Williams argued, “came at a price.”