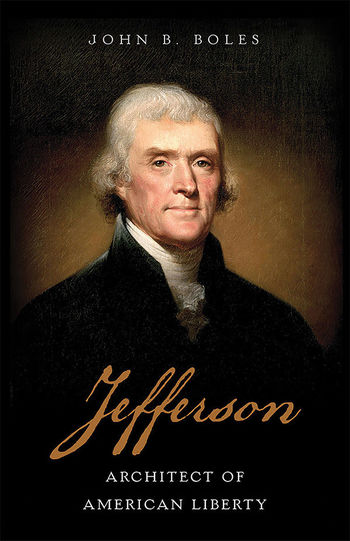 Thomas Jefferson’s reputation has suffered in recent years. In 2015, at the College of William & Mary (his alma mater), students covered Jefferson’s campus statue with post-it notes reading “racist” or “slave owner.” Last month, the University of Virginia began plans to honor the labor of slaves who literally built the university, reminding the public again of Jefferson’s own life-long ownership of slaves. At a more trivial level, the reputation of Jefferson’s rival Alexander Hamilton has witnessed a stunning revival thanks to the popularity of Lin-Manuel Miranda’s extraordinary musical.

In this context, then, comes John B. Boles’ new biography of the third president. At 626 pages, Jefferson: Architect of American Liberty (Basic, 2017) is, in the words of Gordon Wood, “the fullest and most complete single-volume life of Jefferson” since 1970. Indeed, Boles offers a sprightly narrative that illuminates most facets of Jefferson’s life. This review will focus on only two elements of the book, however: Boles’s interpretation of Jefferson’s relationship with slavery, and Boles’s treatment of Jefferson’s religious views.

From the beginning of the book, Boles (Rice University) tries to complicate the image of Jefferson as merely a hypocritical racist. In this he has some work to do, for it is not immediately clear to many people today how Jefferson could write that “all men are created equal” while holding hundreds of people in bondage and freeing very few upon his death. Nevertheless, Boles does an admirable job of putting Jefferson in context: he inherited a good deal of debt (and accumulated some more of his own), making widespread emancipation financially difficult; he labored under the strictures of a 1793 Virginia law that allowed manumitted slaves to be seized as payment for their former owner’s debts; and he had to deal with an 1806 state law requiring any freed slaves to leave Virginia within a year. One might argue that Jefferson could have found a way around each of these problems, but Boles’ point is that emancipation would have been more difficult than commonly imagined.

Boles also is at pains to show what he perceives as Jefferson’s true anti-slavery beliefs. In 1770, for example, Jefferson did pro bono legal work on behalf of a young mixed-race slave suing for his freedom. Four years later, he could write that “the abolition of domestic slavery is the great object of desire in these colonies where it was unhappily introduced in their infant state.” (Whether this was accurate or not is beside the point.)  As president, he used his 1806 annual message to Congress to call on that body to prohibit the transatlantic slave trade (which it did). Most famously, in his Notes on the State of Virginia (1787), he expressed a desire that the United States might abolish slavery completely.

Boles also assesses Jefferson’s relationship with his slave Sally Hemings. Today, based on DNA and other kinds of evidence, historians think it almost certain that Jefferson fathered six children through Hemings after the death of his wife Martha. Naturally, some observers have alleged that Jefferson was nothing more than a rapist. While acknowledging the common practice of slaveowners using their power to force themselves on slave women, Boles thinks the Jefferson-Hemings relationship was an exception: “mutual affection between individuals of unequal status can develop in certain circumstances” (154).  Among other evidence, Boles points out that Hemings could have gained her freedom in France (when Jefferson brought her there in 1787) but instead chose to return to Virginia with him.

In all of this, Boles does not attempt to pardon Jefferson’s behavior.  An advocate of colonization and the inferiority of blacks (his description of African Americans in Notes on the State of Virginia makes for truly nauseating reading), Jefferson held views that can only be described as unambiguously racist. Boles does not shy away from these facts but tries to present Jefferson in context—and tries to help modern readers understand why Jefferson thought the way he did. Boles explains, but he does not excuse. Still, not all will be convinced, especially of his treatment of the Hemings-Jefferson relationship. It is worth pointing out that Hemings was thirty years younger than Jefferson, and that she was only sixteen when she theoretically had the opportunity to gain her freedom in France. Both of these facts make it hard to believe that she really chose love over freedom.

Perhaps of even more interest to readers of this blog is Boles’ treatment of Jefferson’s religion. Like most of the Founding Fathers, Jefferson cannot be described as an orthodox Christian; indeed, among the major founders he probably strayed the farthest from traditional Christianity. Boles notes his “emerging skepticism toward orthodox Anglicanism” (19) as a teenager and describes his youthful rejection of the Trinity, Christ’s divinity, and the atonement. A decade later, Jefferson had grown more respectful of Christianity although he would never wholeheartedly take part in Virginia’s Anglican establishment. His rumored heterodoxy (or even atheism) would haunt him in the 1800 election, when Federalists put those charges to good political use. In 1804, and then again in 1820, he edited the New Testament gospels, removing sayings of Jesus he thought inauthentic. The result was a work stripped of the supernatural, leaving only (in Boles’ words) “the simple, unadorned ethical principles of Jesus” (452).  Despite this, Jefferson still thought himself “a real Christian, that is to say, a disciple of the doctrines of Jesus” (452).

He refused to proselytize for his beliefs, however, claiming “I am of a sect by myself” (452). He agreed with John Adams that the restoration of the Jesuits in 1814 bode evil for the nation, arguing that it was “a retrograde step from light towards darkness.” Thus, while Jefferson mostly stood against the religious trends of the early 19th century, the individualism and anti-Catholicism on display here help us see how he also partook of the spirit of the age. Historians might think more about how religious outliers like Jefferson nevertheless maintained commonalities with larger trends.

Perhaps Jefferson’s greatest achievement was his lifelong advocacy for religious freedom. Too radical for its day, Jefferson’s draft of a 1776 Virginia Constitution would have provided for “full and free liberty of religious opinion” with a disestablishment of the Anglican Church. What did ultimately gain acceptance (although not until 1786) was Jefferson’s Virginia Statute for Religious Freedom, which Jefferson meant to grant religious liberty even to non-Christian religions. The statute would be one of three accomplishments he insisted must be included on his tombstone.

Overall, Boles’ biography illuminates Jefferson’s life in profound ways. One does not have to agree with all of Boles’ perspectives to gain greater insight into Jefferson, American religion, and the early national period. While the book is a bit repetitive in places (Boles tells us no fewer than three times that Jefferson diluted his wine with water, for example), it succeeds as an astute, judicious assessment of our third president. While it certainly falls into the unfashionable category of “great man biography,” Jefferson: Architect of American Liberty engages themes of live interest to all kinds of historians. The book will undoubtedly be the definitive biography for the foreseeable future.

This book review was first published at Religion in American History. Benjamin Wetzel is a postdoctoral fellow at the Cushwa Center. He specializes in American religious, political, and intellectual history in the period from 1860 to 1920.