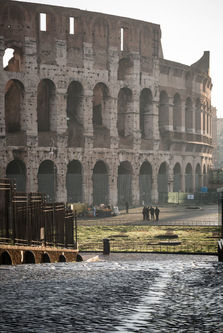 An international group of scholars gathered June 5–7 at Notre Dame’s Rome Global Gateway for the three-day conference, North Atlantic Catholic Communities in Rome, 1622–1939, on the importance of the Eternal City for the study of trans-Atlantic Catholicism. Sponsored by the Cushwa Center and convened by Kathleen Sprows Cummings and Luca Codignola, Cushwa’s senior fellow in Rome, the conference was designed to accentuate the presence of individuals or communities formed in Rome or otherwise tied to it, and to shed light on their impact on the wider Church and world. Participants gave papers in English, French, and Italian—a mark of the diversity of the group, which hailed from institutions in Canada, England, Ireland, Italy, Poland, Scotland, Spain, and the United States.

Thomas O’Connor, senior lecturer and dean of the Faculty of Arts, Celtic Studies and Philosophy at the National University of Ireland, Maynooth, opened the conference with a talk on “Brokers, Fixers, and Traffickers across Three Empires: The Niche Activities of the Irish Clerical Diaspora, 1550–1815.” An expert in Irish history, O’Connor signaled just how fluid the labors of Irish clerics in Rome could be. Despite the exile imposed by English and Dutch Protestants, Irish clergymen felt right at home in Rome (as well as in Spain and Portugal). They were busy establishing houses, continuing the education of students, and securing relics for pious patrons around Europe. The creation of Irish networks, with Rome as the locus of their activities, began almost immediately at the start of the so-called “penal times.”

A similar thesis could be found in the skillful paper of James Kelly of Durham University, though his focus was on the labors of the English Jesuit John Thorpe, an agent in Rome who supplied English convents in exile between 1769 and 1789. The migration of these convents to places in Belgium, France, and Spain gives some indication not only of the mutations and adaptability of their foundations, but also of their continued reliance on spiritual and material provisions from Rome.

Anglophone Rome was centered on the Venerable English College, which served not only as a training ground for future priests, but also as a source for bishops, since its rectors—such as Henry Conwell and Nicholas Wiseman—were periodically tapped for bishoprics in the United States and England. Maurice Whitehead of the Venerable English College gave a remarkable survey of 23 letters between Conwell and Wiseman (as well as 411 folios of correspondence from the Archbishops of Québec) found at the English College’s archive. He noted that there were large caches of untapped material related to the dioceses of Philadelphia and Baltimore housed there and encouraged scholars to review them. 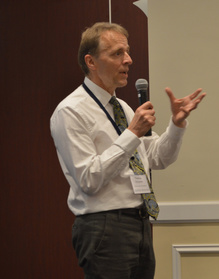 The Holy See figured prominently in several papers. Paolo Bernardini of the Accademia dei Lincei chaired a panel on relations between the Holy See and the North American hierarchy. Kenneth Parker of Saint Louis University drew attention to the ultramontanism and Gallicanism of the two brother bishops, Francis and Peter Kenrick. Suzanne Krebsbach presented a paper on two proslavery bishops of Charleston, John England and Patrick Lynch, and the Vatican’s working policy regarding slavery in the antebellum American South. Pierre Hurtubise, Université Saint-Paul (Ottawa), examined the ultramontanism of Jean-Marie-Rodrigue Villeneuve, a professor and Missionary Oblate of Mary Immaculate (and later archbishop and cardinal) through correspondence about his first visit to Rome in 1926.

Contributions on Canadian topics were plentiful and helped show the reach of Catholicism in the Atlantic world. Terrence Murphy, Saint Mary’s University (Halifax), undertook a study of Irish Catholics in Nova Scotia, 1785–1860, while Robert H. Dennis, University of Prince Edward Island, examined the influences of transnational Catholic social thought and the Antigonish Movement between 1912 and 1939.

In a session on the Holy See and the North American hierarchy, Martin Pâquet, Université Laval (Québec), discussed multi-ethnic conflicts between the Church and state between 1830 and 1931. Roberto Perin, Glendon College, York University (Toronto), argued that a Romanizing of ritual practice by Montreal Bishop Ignace Bourget between 1851 and 1865 led to a decidedly favorable view of the papacy even amid tensions between the Church and state in Canada. Gilles Routhier, Université Laval (Québec), expounded on the life of sometime Roman resident Louis Nazaire Bégin, who was often at the center of battles for the rights of French Canadians at the Propaganda Fide over and against Irish Catholic Canadians.

The Apostolic Delegation and the United States was the subject of a panel chaired by Gianfranco Armando, Archivio Segreto Vaticano. Massimo Di Gioacchino, Scuola Normale Superiore (Pisa), dealt with source material in his discussion of “The American Community in Rome and the Election of Francesco Satolli as the First Apostolic Delegate to the United States, 1893.” Father Steven Avella, Marquette University, considered a lens through which to see American history, albeit one angled through an exposition of Roman sources, namely, the American West. Liliosa Azara, Università Roma Tre, also shared archival data on the Apostolic Delegation in Washington during World War I. Maria Williams, University College London, lifted up a central figure in her dissertation work, Mother Frances Cabrini, but linked her transnational ministries with the Apostolic Delegates of England and the United States. Her paper also examined archives on both sides of the Atlantic.

Numerous contributions centered on Anglo-Celtic communities in Rome in the 17th through the 20th centuries, including the presentations of Clare Carroll of Queens College, City University of New York, “English, Irish, and Scots Women at the Ospizio dei Convertendi in the 17th and 18th Centuries;” and Anne O’Connor, National University of Ireland, Galway, “Translation and Global Catholicism: Anglophone Networks in the 19th Century.”

Several papers focused on the Irish College or St. Isidore’s, the home of the Irish Franciscans in Rome. Among these were Jacopo De Santis, Università di Roma Tor Vergata, “Il Collegio Irlandese durante la Repubblica Romana del 1849;” and Stephen O’Kane, O.F.M., Irish Franciscan Province, “Irish Franciscans: Educated at St. Isidore’s, Ministered in 19th-Century North America.” Additionally, John McCafferty, University College Dublin, discussed Friar Luke Wadding’s passion for books and the building up of his library at St. Isidore’s. He was joined by Cristina Bravo Lozano of the Universidad Pablo de Olavide, though her remarks centered on Wadding as an Irish diplomat in Rome. Irish Franciscans who worked on editions of the philosopher John Duns Scotus also came in for special mention by Ian Campbell, Queen’s University (Belfast). In Campbell’s telling, these editors of Scotus exported his philosophical theology throughout the Atlantic world.

Anglo-Irish networks enjoyed patronage in the Roman curia, as evinced by Roberto Regoli of the Pontificia Università Gregoriana, who spoke on “The English Entourage of Ercole Cardinal Consalvi, 1757–1824.” Not everyone was so fortunate to have Cardinal benefactors. According to Nicholas Stanley Price, who oversees the records for the Non-Catholic Cemetery for Foreigners in Rome, Protestant foreigners were persona non grata and often treated shabbily. Catholic women fared better, particularly under the reign of Pope Leo XIII, who often encouraged religious women to establish their motherhouses in Rome. This was the essence of the paper of Carmen Mangion of Birkbeck College, University of London.

Several papers either conveyed the perspective of a particular region, personage, or time period, or they concentrated on the activities of some Roman entity. For instance, participants heard papers on the presence of Native Americans in Rome between the 16th and 19th centuries, and the clash of British colonialism with Roman authority in 19th-century Trinidad. Joseph M. White discussed the unique experience of American seminarians at the North American College in the first few decades of the last century. M.C. Havey, Redemptorist Archives of the Edmonton-Toronto Province, spoke on Father Matthew Meehan, C.Ss.R., and his student days in Rome. Patrick Hayes, Redemptorist Archives of the Baltimore Province, shared new details on the life of Father Edward Douglas, C.Ss.R., a Scottish Redemptorist responsible for the erection of the Redemptorist Generalate on the Esquiline. 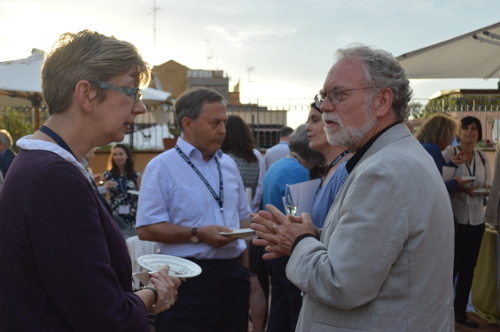 Alexander Moore and Carol Harrison at the conference's opening reception.

Colin Barr, University of Aberdeen, brought the conference to a close as its final keynote speaker. Having amassed an enormous wealth of archival data from around the globe, he argued the case for an “Irish Spiritual Empire”—one that included religious piety, culture, and politics in the 19th century. The ease of travel had become so prevalent and modes of communication so free and open that “it makes no sense to isolate Australia from America, or even from Newfoundland.” Cultures moved, he insisted, across oceanic basins, so that reporting on “home news” typically meant that stories from Skibbereen held just as much fascination for the local resident as it did for their compatriot in Auckland, Boston, or Rome.

If the conference organizers sought to realize the dream of the late Peter D’Agostino in arguing for increased use and integration of Roman archival sources, as well as the interchange that might occur as a result, the conference can go down as a testimony to his aspirations and promptings.

Patrick J. Hayes, Ph.D., is the archivist for the Baltimore Province of the Redemptorists. He edits the online journal Redemptorist North American History Bulletin.