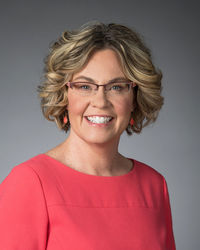 My last three notes have been grim, covering George Floyd’s murder (fall 2020), COVID-19 (spring 2020), and clergy sexual abuse (fall 2019). These crises and their reverberations are still shaping our lives and Cushwa programming. Nevertheless, I resolved to compose this note in a spirit of joy—literally. There is a model for this in the Catholic liturgical calendar. On the fourth Sunday of Lent, known as Laetare Sunday, the Church deliberately pauses in the solemn season of penitence to anticipate the joy of the Resurrection. “Laetare,” the Latin word for “rejoice,” is also the name of an annual award that Notre Dame has been bestowing since 1883. It is proclaimed, perhaps presumptuously, to be the highest honor awarded to an American Catholic.

Like the gilded Our Lady of the Immaculate Conception atop the Main Building, which replicates a statue in Rome’s Piazza di Spagna but honors Mary under her title of patroness of the United States, the Laetare Medal infuses a Roman tradition with a decidedly American flavor. Modeled after a papal honor conferred on Laetare Sunday, the U.S. version was designed to highlight Catholics’ role in American life. Devised as a marketing tool of sorts, the Laetare Medal celebrated Catholics’ contribution to the nation during an era when many of their fellow citizens doubted that they had the capacity or willingness to contribute. Historian John Gilmary Shea, who foregrounded Catholic subjects in American history, was an apt first recipient of the medal.

The medalist is now announced on Laetare Sunday, but traditionally the medal was bestowed on that feast, when Notre Dame’s president or his delegate traveled to the honoree rather than the other way around. An exception was made in 1933, the medal’s 50th anniversary, when all living honorees were invited to attend that year’s commencement. Among the luminaries was Al Smith, the former governor of New York, who had been awarded the medal in 1929, the year after he lost the presidential election.

John F. Kennedy was the obvious choice for the honor in 1961, the spring after he became the first Catholic to win the U.S. presidency. Tellingly, Notre Dame’s president Theodore Hesburgh broke with precedent in approaching Kennedy before any announcement was made, giving him the option to decline the honor if it seemed unwise to call so much attention to his Catholicism during his first year in office. Kennedy did give the green light. But the fact that Hesburgh had felt the need to ask permission signaled that a formerly uncontentious honor would grow more complicated in the years ahead. In 1972, for example, Dorothy Day seriously considered refusing the medal, believing that her status as a “Christian anarchist” and tax refuser precluded her from accepting the honor.

One hundred years on, in 1983, Notre Dame administrators wondered whether the Laetare Medal was a relic of a bygone age. “After all,” Hesburgh mused, “with twenty-one members of the United States Senate, [Catholics] are hardly an immigrant minority; we have entered the mainstream.” Notre Dame did decide to continue to recognize men and women who best embodied American Catholic ideals, and Hesburgh himself received the award in 1987 (originally only lay Catholics were eligible, but that changed after the Second Vatican Council).

Conceived as a way to bridge a gap between Catholics and their fellow citizens, the Laetare Medal has in recent years increasingly come to reflect divisions among Catholics themselves. In 1992, several Catholic bishops objected when the honor went to Democratic politician Daniel Patrick Moynihan, arguing that his public support of legalized abortion should disqualify him. A similar case, advanced far more vociferously, was made in 2016 when then-Vice President Joseph Biden received the award jointly with John Boehner. And, famously, Mary Ann Glendon publicly declined the medal in 2009 in the midst of the furor over President Barack Obama’s selection as Notre Dame’s commencement speaker.

The 2021 medalist, Carla Harris, will become only the third Black Catholic to win the Laetare Medal (Sister Thea Bowman became the first so honored only in 1990). We warmly congratulate Harris.

I want to end with words from the 2020 awardee, Kathleen McChesney, who was honored for her leadership role in working toward the prevention of clergy sexual abuse over the last two decades. McChesney had this to say in her (virtual) acceptance speech:

I am especially encouraged by the University of Notre Dame and the Cushwa Center’s sponsorship of the ongoing research project “Gender, Sex, and Power: Toward a History of Clergy Sex Abuse in the United States Catholic Church.” This work, which is directed by a team led by Dr. Kathleen Sprows Cummings, is an example of academic collaboration with external researchers at the highest levels. The research is an unprecedented step in the history of the Church and is certain to uncover difficult truths about the consequences of power differentials and lack of accountability within the Church. The inscription on the Laetare Medal reads “Truth is mighty and will prevail.” It’s most appropriate, then, that Notre Dame’s research is leading the way in illuminating past secrets of the Church and in educating new generations of Catholics about protecting the young and the vulnerable.

I was moved by McChesney’s fervent support of the Cushwa Center. Beyond that though, as a person fascinated by the way Laetare has changed over time, I hope that the medal will not only celebrate what Catholics have done in America, but prompt us to ask what we can do better.

Kathleen Sprows Cummings serves as the William W. and Anna Jean Cushwa Director of the Cushwa Center for the Study of American Catholicism at the University of Notre Dame, where she is the Rev. John A. O'Brien Collegiate Professor of American studies and history.

This director's note appears in the spring 2021 issue of the American Catholic Studies Newsletter.