"Too small a world": Catholic Sisters as Global Missionaries 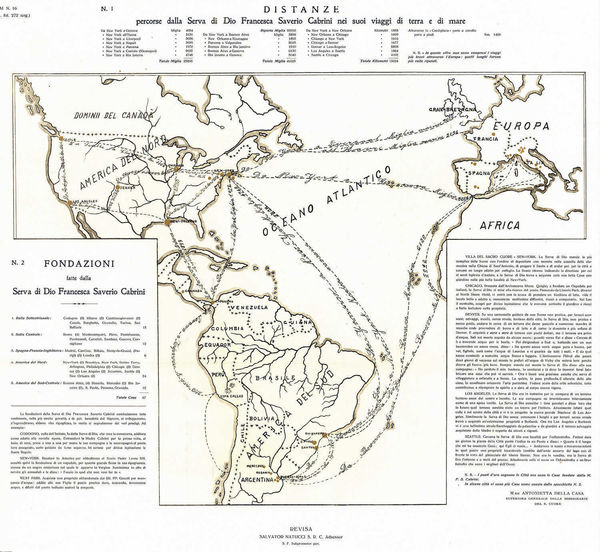 A map of Mother Cabrini’s travels from the official documents, or positio, prepared in 1929 for the Congregation for the Causes of Saints

Approximately 70 historians and women religious gathered April 6–8, 2017, at the University of Notre Dame for the conference, “Too Small a World”: Catholic Sisters as Global Missionaries. The gathering honored the centenary of the death of St. Frances Xavier Cabrini, a woman who, as Cushwa director Kathleen Sprows Cummings pointed out in her opening remarks, “was a global citizen long before the invention of that term.” The conference exemplified the Cushwa Center’s current dual priorities of situating the story of U.S. Catholicism in transnational contexts while also calling attention to the place of women religious in international history.

While conference papers largely emphasized the history of women religious as missionaries and boundary-crossers, plenary talks focused on the ways in which Cabrini’s story still resonates. Today, energetic women religious continue to traverse political and physical boundaries to minister to migrants and refugees around the world.

She spoke about the changing mission of her congregation as a kind of voyage. “When Mother Cabrini died,” Staley said, “the earth shook.” Everything in the congregation changed. A hundred years later, her sisters are again confronted with a sea change in praxis. Just as Cabrini faced her fear of water to cross the ocean many times to build structures for the future, her sisters now work “to bring the love of God to the world, not to perpetuate what we have been in the past,” Staley said. She connected the sisters’ current mission to Cabrini’s task of adjusting to the needs of her own time and place. Staley noted that the saint “gave up her lifelong dream” of mission to China “in obedience to God as revealed to her through ordinary experiences.” Ultimately, however, this was not a sacrifice: “When she came to the United States, she became more fully who God had called her to be, because the culture gave her freedom that she would have never had if she had stayed in her small Italian village. Global missionaries show us that as we get outside of our own sphere, as we meet other people and walk in other places, we become more full. We become more than the people we were.” 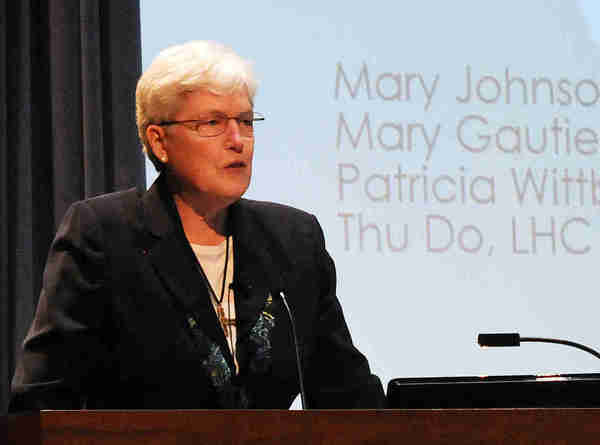 Mary Johnson, S.N.D. de N., addressing the conference in her keynote address, spoke about the initial results of “International Sisters in the United States,” a major study of approximately 4,000 foreign-born sisters currently in the United States. Johnson, distinguished professor of sociology and religious studies at Trinity Washington University, was the lead researcher for the study, which was funded by the GHR Foundation. Johnson sketched the diversity of these international sisters, who come from around the world for a variety of missions. While some are in the United States primarily for short-term study and will return to their home countries, others are here on long-term mission as medical workers, teachers, and evangelizers—the classic work of “Catholic sisters as global missionaries.” As with their forebears, many of whom similarly came to minister to their immigrant compatriots, their labor represents a great gift to the church in the United States, but Johnson also spoke about the linguistic, cultural, and financial support they need and sometimes do not receive. She also noted the challenges as well as opportunities that present themselves when American-born women religious share living space with sisters from overseas. 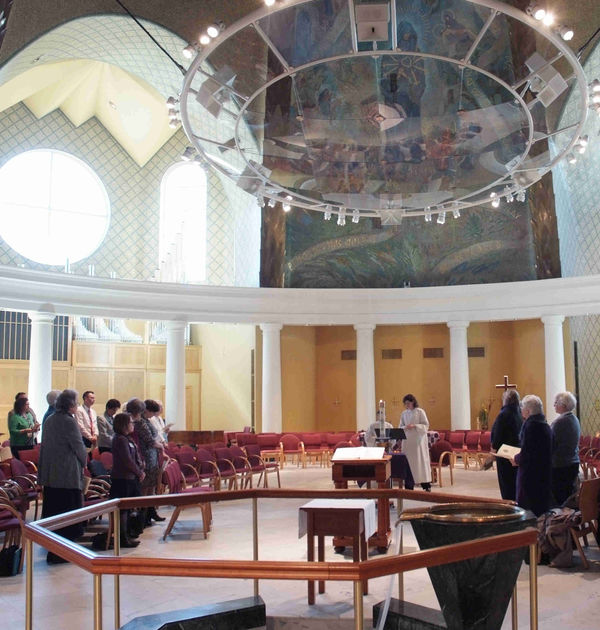 Friday’s prayer service at the Church of Our Lady of Loretto, Saint Mary’s College

In a plenary session on “Advancing the Emerging Global Sisterhood,” Sister Rosemarie Nassif, S.S.N.D, director of the Conrad N. Hilton Foundation’s Catholic Sisters Initiative, discussed the ways in which Catholic women religious around the world can respond to Pope Francis’ call to “wake up the world!” Sisters must be prophetic witnesses to God’s truth for their particular time and place, she said. They must embody the mercy of God’s love, communicating with their lives that all are loved, sought after, and forgiven.

To make the most of the challenges and opportunities of our times, Nassif said, sisters must emphasize three values: collaboration, communication, and communion. Catholic women religious must embrace their vocation as a united global sisterhood and work to collaborate with congregations across the world. Sisters’ education, for example, presents opportunities for collaboration among congregations. Moreover, sisters should employ the best and latest communications practices and technology to ensure that their message is heard. Finally, sisters must be a force for intercultural exchange and unity, for sisters cannot be truly global if they are not united. Nassif explained that, as a direct result of Conrad Hilton’s own conviction that Catholic sisters were a powerful force for good, the Hilton Foundation today offers funding to congregations of women religious around the world to assist in advancing their missions.

Gabriella Bottani, C.M.S., coordinating director of the anti-trafficking network known as Talitha Kum, rounded off the plenary addresses with an account of sisters’ cross-congregational work against human trafficking, spanning from Josephine Bakhita to the present day. 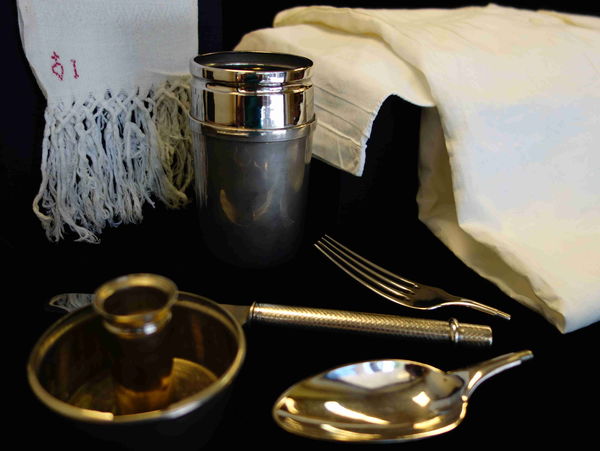 Recurring themes echoed back and forth across the several hundred years of history covered among the conference’s ten panels and four plenary addresses. Interdisciplinary conversation was itself a theme of the conference, as historian Carmen Mangion noted. She praised the participation of sociologists, saying, “it was useful to see how the past and present intersect,” and to learn “whether and how present practices relate to historical developments.” Participants likewise highlighted the fruitful collaboration of conference attendees, who included a number of missionary sisters as well as academics. Ancillary conference events, such as a Friday prayer service and reception at Saint Mary’s College (arranged by the Saint Mary’s College Center for Spirituality and the Sisters of the Holy Cross) and a trip to the National Shrine of Saint Frances Xavier Cabrini in Chicago, gave participants additional opportunities to compare and contrast past and present. Thanks to a collaboration between Notre Dame’s Hesburgh Libraries and Holy Spirit Library at Cabrini University, attendees and the wider Notre Dame campus were able to enjoy a special exhibit featuring artifacts from Cabrini’s personal archive.

A major theme of the conference regarded adaptation of both the understanding and practice of “mission” in different times and places. Often, sisters found themselves responding to needs their founding documents did not anticipate. Ryan Murphy commented on this, noting the breadth of activities represented: “I was most struck by how many congregations have some form of missionary presence, even if their founding missions and charisms do not emphasize evangelization.” Murphy also noted how often sisters “made courageous leaps first, and planned for practicalities—like housing!—after arrival,” a point echoed by Ellen Regan, who found the main takeaway of the conference to be “the sheer determination and courage of the early missionaries,” as well as their fellows today who “enjoy more convenient journeys but are faced with many challenges and witness severe human hardships, working to fight injustice and inequality around the world.”

Unsurprisingly, considerations of travel and cross-cultural encounter were prominent. Many papers, such as those by Elizabeth Smyth, Jenny Collins, and Deirdre Raftery on Irish missionaries in Canada, New Zealand, and Australia, recounted long voyages which saw sisters far from authorities at home, navigating logistical mishaps and making critical decisions at every turn. Others, such as Maggie McGuinness’ paper on the Sisters of the Blessed Sacrament who served “mission” schools only a few miles from their Philadelphia motherhouse, considered how sisters constructed otherness in local circumstances. This opened onto another major theme, namely, that the sisters understood themselves and the recipients of their missionary action in many different ways. Mary Ewens, O.P., spoke about “the many levels of missionary ethnocentrism,” while other research, such as Theresa Keeley’s and Mary Beth Fraser Connolly’s, spoke to how the new politics and environments they encountered reshaped sisters’ understandings of the world and their own responsibility in it, particularly in missions to the Global South in the latter half of the 20th century. As the plenary addresses and several sociological presentations made clear—especially the study of missionary sisters’ education today presented by Thu Do, L.H.C.—these are experiences with which sisters still struggle, and by which they are still transformed.