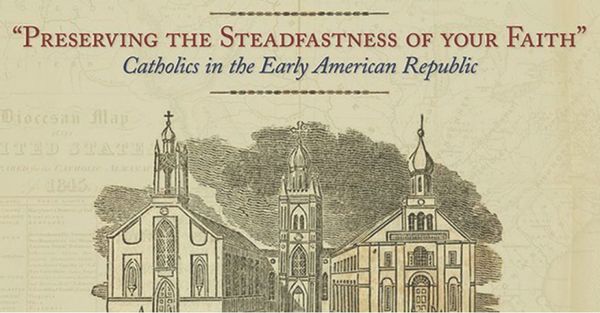 This spring and early summer, Rare Books and Special Collections at Notre Dame’s Hesburgh Libraries hosted two public talks about Catholics in the early American republic. On March 22, Catherine O’Donnell, associate professor of history at Arizona State University, gave a public talk, “Saint Elizabeth Ann Seton: A Reading Life.” Kyle Roberts, director of the Center for Textual Studies and Digital Humanities and assistant professor of public history and new media at Loyola University Chicago, lectured in early June on “21st Century Digital Approaches to Rethinking 19th Century Catholic Print.” Both presentations were planned in tandem with the library’s exhibition, “Preserving the Steadfastness of Your Faith”: Catholics in the Early American Republic, which was on display from early spring until late summer. The digitized exhibit is now available at collections.library.nd.edu.

O’Donnell, who is currently completing a biography of Elizabeth Ann Seton, focused on an evident contradiction in Seton: she was someone who experienced God through reading and books, but who also realized that she could not simply read her way to faith. In her presentation, O’Donnell traced Seton’s reading life from girlhood through her conversion and beyond, as a way to understand this important figure in American religious history. Elizabeth Bayley was born in New York City in 1774 to a socially prominent Protestant family. Throughout her life she was a voracious reader. O’Donnell found a workbook of Bayley’s that she used to track her studies and reading. In the margin she had written “Wollstonecraft,” indicating her familiarity with the women’s rights advocate and intellectual, Mary Wollstonecraft.

When Bayley married William Seton, a wealthy trader, she joined the exclusive ranks of those who held a library card at the New York Society Library, a subscription library. Seton, however, experienced hardship early in her marriage. William Seton suffered from tuberculosis and his import business was damaged in the escalating conflict between the United States and Great Britain in the years before the War of 1812. After his death in 1803, and with the help of close friends, Elizabeth Seton became drawn to Catholicism. As O’Donnell described it, through her husband’s death Seton had felt the immediateness of heaven reaching down to earth. It was, as O’Donnell put it, an idea antithetical to reason and “against books.” Still, Seton spent a year reading about Catholicism. O’Donnell discovered that Seton finally realized that she could not read or reason her way to faith. She was emotionally drawn to Catholicism and in 1805, made her decision to join the Church. Seton continued to read after her conversion. Her copy of Thomas à Kempis’ The Imitation of Christ, on display in the exhibition, reveals Seton’s deep engagement with the text through her annotations and other markings.

In June, Kyle Roberts gave a talk about his current project, which examines the surprisingly robust print culture that American Catholics created during the early 19th century, and the ways in which new digital humanities applications (like the Jesuit Libraries Provenance Project) can help historians reconstruct this lost world. The religious materials American Catholics published remind us of their transnational, hybrid identities, which balanced allegiances to the state, homeland, and global Catholic Church. The distribution of Catholic print through gifts and sales also served to reinforce scattered communities of believers, both clerical and lay, across the young nation. Roberts’ project revises assumptions about this period, when scholars have long focused on Protestants, especially in the Midwest, as the people of the printed word. This understanding stretched from their founding of Bible and tract societies to the catalyzing power of Lyman Beecher’s A Plea for the West. By looking at what Catholics were printing and purchasing, Roberts is uncovering a new historical narrative for the early part of the 19th century.