New directions in the study of global Catholicism 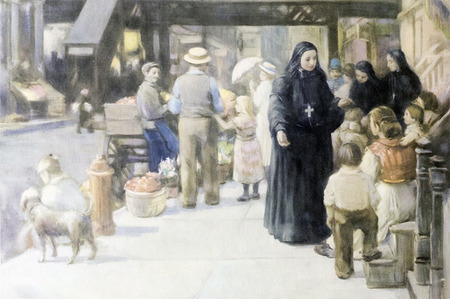 For several years now the Cushwa Center has prioritized advancing a more transnational understanding of American Catholic history. Research grants, symposia, conferences, and publications have supported scholarly inquiry into the threads tying U.S. Catholicism not only to Rome, but also to clergy, religious, and laity around the world.

These efforts particularly bore fruit in three distinct events in spring 2017. The Seminar in American Religion in April was devoted to John T. McGreevy’s American Jesuits and the World: How an Embattled Religious Order Made Modern Catholicism Global. Two larger conferences considered the “crossings and dwellings” of women’s religious orders as well as of Catholics in Rome from the North Atlantic world. April’s conference at Notre Dame, “Too Small a World”: Catholic Sisters as Global Missionaries, honored the centenary of St. Frances Cabrini’s death by examining the past and present of women religious as boundary-crossing missionaries. North Atlantic Catholic Communities in Rome, 1622–1939, an international conference held at Notre Dame’s Rome Global Gateway in June, uncovered a transnational network of individuals and communities who made Rome the center of their spiritual and physical world.

With gratitude for the time and energy that presenters and participants invested to make these gatherings each a success, we are happy to revisit each of them here. In the months and years to come, the center looks forward to further research with collaborators regarding the dense global networks and movements of modern Catholicism.

“Too small a world”: Catholic sisters as global missionaries