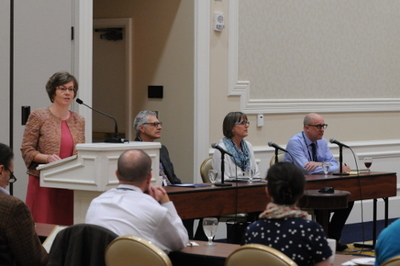 The spring 2017 Seminar in American Religion convened on Saturday, April 1, at Notre Dame to discuss John T. McGreevy’s new book American Jesuits and the World: How an Embattled Religious Order Made Modern Catholicism Global (Princeton, 2016). McGreevy is professor of history and I.A. O’Shaughnessy Dean of the College of Arts and Letters at the University of Notre Dame and also the author of Catholicism and American Freedom, previously the subject of a 2003 Seminar in American Religion. Close to 80 seminar guests, faculty, and students joined McGreevy and the seminar’s two commentators, Thomas Bender and Laurie Maffly-Kipp, for a wide-ranging discussion.

Bender, professor of history and University Professor of the Humanities at New York University, has been a leading voice in the movement to place American history in a global framework. He is author of A Nation Among Nations: America’s Place in World History (2006) and editor of the collection Rethinking American History in a Global Age (2002). Bender began by discussing the methodology of global history, remarking that it is unavoidably transnational; the globe is too big, too unmanageable for typical archival history, he said, and the truly “global” usually remains deep in the background. He focused on the penultimate chapter of McGreevy’s work, in which American Jesuits travel out of the United States in the wake of the American military’s excursion into the Philippines. Though the Americans were part of a global order, they perceived their work as nationalistic, not cosmopolitan. In his letters to superiors, American Jesuit Charles Connor explicitly urged the Americanization of Filipino youth. The Spanish priests of his own order, Connor wrote, had made “boys into pious girls,” a disaster that could be countered by a robust, masculine American Catholic culture. Bender noted that this chapter contrasted with McGreevy’s concluding chapter, where he names John Courtney Murray and other 20th-century American Jesuits as, in part, precursors to the global humanism now evident in the pontificate of Francis.

For Bender, the achievement of American Jesuits and the World is its apt layering of micro- and macro-history using individual biography and broader contextualization. McGreevy draws on the priests’ papers to reveal a rich sense of the public culture and core values of particular places. The book’s microhistories reveal how the transnational circulation of Jesuits and their pastoral ministry touched lives and and shaped religious practices over time.

Laurie Maffly-Kipp is the Archer Alexander Distinguished Professor at the Danforth Center on Religion and Politics at Washington University in St. Louis, where she is also the director of religious studies. She began her remarks by noting that missionaries are a consistent focus in her scholarly work on a wide variety of groups including Mormons and African American evangelicals. The study of missionaries raises many questions. “What do missionaries think they are exchanging or communicating in their work? How does one encapsulate a religious system into lessons or teachings? What does it mean to pare down a way of life for purposes of easy transportation and translation?” Maffly-Kipp asked. Missionary efforts often lead to “unintended consequences, ruptures, and comic or tragic misapprehensions,” she said. Moreover, scholars may examine the variety of ways that “missionary ‘gifts’ are received, incorporated, rejected, or transformed by recipients.” 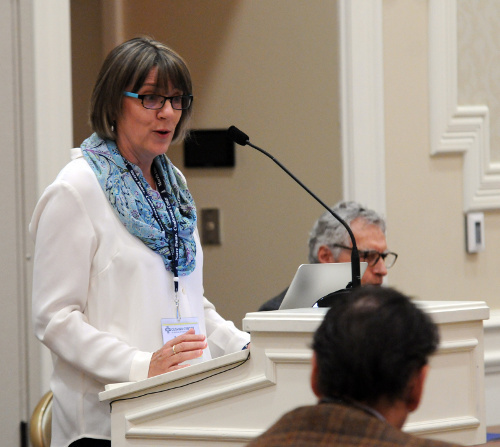 Maffly-Kipp considered texts and arguments to compare to American Jesuits and the World, including John Demos’ The Heathen School and Jon Sensbach’s Rebecca’s Revival, which merges a comprehensive historical narrative with compelling character portraits. She praised McGreevy’s attention to geography, as history “plays out over space as well as time,” and to the importance of the physical and technological systems that carry ideas, material goods, and people. She then drew attention to three large questions. First, she asked, what is the relation of the Jesuits to Catholicism as a whole? Would it be helpful to attend more to comparisons with other Catholic orders involved in similar work? She also wondered about placing the 19th-century Jesuits against the order’s longer history. Maffly-Kipp asked whether, despite the order’s suppression, which created a gulf between phases of Jesuit history, it would make a difference to the narrative to consider early Jesuit missions in California, as well as the later expansion from Europe to the East Coast to the Pacific. She also wondered whether any earlier Jesuit transmission of Chinese ideas had accompanied these 19th-century Jesuits to North America, and, in the context of Jesuits’ earlier global missions, whether the 20th century represented a revival of an earlier norm of global interaction, with the inward-turning, nationalist 19th century as an outlier rather than a stage of development.

Maffly-Kipp also interrogated the trajectory of modernization portrayed in McGreevy’s concluding chapter. She questioned whether John Courtney Murray was really representative of his fellow Jesuits. Moreover, if exile shaped the experience of 19th-century Jesuits, she asked, how might other factors have shaped the American-born order of the 20th century? Specifically, she wondered if more attention to the larger U.S. cultural and political history in this period might have changed how McGreevy viewed Jesuit developments. This brought Maffly- Kipp to her third point: centered as it is on one particular religious order, McGreevy’s book pays relatively little attention to the fact that the ideas of global religion and global diaspora mean very different things in different communities; missionaries from various backgrounds also have very different ideas about what it means to live with people from a different culture, or how to be multicultural. To consider missionary groups historically, one must investigate how they define the central features of their religion and how they relate those features to transient or cultural manifestations. She asked whether “global” is really all that helpful as a term of historical analysis, because it tells us relatively little about the ways specific people enact and embody difference as they live together. Would a comparative frame with other groups, including African-American and white Protestant missionaries, shed even more light on the Jesuits?

McGreevy began his response by discussing some of his project’s goals. He was interested in telling a “human story” and “capturing a 19th-century Catholic religious world,” but also, influenced by Christopher Bayly’s The Birth of the Modern World 1789–1914 (2003), he saw an opportunity as a Catholic historian to think about the relationship of local religious communities to the nation state and to think about them in a global setting that is not abstract or vague, but constituted by particular institutions—in this case, Catholic religious orders. He said that 19th-century Jesuits had been decisive in an internal battle within American Catholicism; they had fought for a European Catholic culture, including architecture and devotional practices, against the nationalist impulse represented by men like John Ireland. But by the mid-20th century, their vision of Catholicism became more focused on interaction with indigenous practices in different parts of the world. 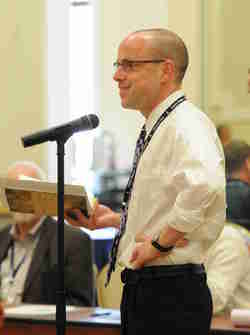 As the seminar opened up for discussion, Peter Thuesen (Indiana University–Purdue University Indianapolis) asked how it came about that the illiberal or anti-liberal Jesuits of the 19th century became the liberal Jesuits of America and Pope Francis. According to McGreevy, disillusionment over Catholic complicity in Fascism played a key role in Jesuits’ transition from criticizing liberal principles to defending them, particularly free speech and especially the separation of church and state. He also said that the 19th-century Jesuits were not anti-intellectual but did have a popular touch; they were learned but were also able to mobilize mass movements around popular devotions. Peter Williams (Miami University, Ohio) pointed out that in its early decades America was certainly not liberal, and suggested that a close analysis of America over the 20th century would tell a more gradual story about change in the American Jesuits.

Jason Duncan (Aquinas College) and Michael Skaggs (University of Notre Dame) both raised questions that prompted McGreevy to comment on the Catholic experience in the United States as it relates to broader, transnational contexts. Duncan asked how the Jesuit restoration related to the end of the “republican interlude” in U.S. Catholicism and whether it contributed to the rising anti-Catholicism in the 19th century. McGreevy said that the Jesuits certainly contributed to the growth of anti-Catholicism, and he also pointed out that, as the work of Luca Codignola and other historians suggests, the “republican interlude” in U.S. Catholicism seems not exclusively a product of U.S. politics and culture, but relates to broader developments and political attitudes among Catholics throughout the North Atlantic world. Skaggs asked about the notions of “center” and “periphery” operative in the book and particularly in the conclusion’s claim that Manila and Kampala are the ascendant centers of Catholicism today, over older European centers of influence. McGreevy replied that, despite necessary qualifications, the Catholic Church as a global institution undeniably finds itself in a moment of historic reorientation toward the Global South in terms of demographics, sensibilities, and ultimately influence. This emergence of new ecclesiastical centers is reflected in contemporary U.S. Catholic experience, insofar as international priests and religious ministering throughout this country now largely come from the Global South rather than France, Italy, or Ireland.

Una Cadegan (University of Dayton) asked about takeaways from the book. Maffly-Kipp said she was interested in American Jesuits and the World as a story not just about Catholics but also about global religious institutions that push beyond national framework. Bender agreed and returned to the comparative question, wondering whether McGreevy could have paid more attention to American Catholics’ Protestant surroundings.

Kathleen Sprows Cummings (Notre Dame) asked McGreevy about how his “non-Jesuit status” affected the book. McGreevy replied that the book should have given more attention to Jesuits’ spiritual lives, and that perhaps someone who had gone through that regimen, including the Spiritual Exercises of St. Ignatius, would have been more attuned to that. This led to questions from Scott Appleby (Notre Dame) about comparing McGreevy’s methodology to Robert Orsi’s in History and Presence, and from Bradley Gundlach (Trinity College) concerning Protestant interest in Christ’s “bodily, fleshly wounds” in the supposedly rationalist 18th century. In response to the latter, McGreevy remarked that while he focused largely on differences between Catholics and Protestants, many other scholars are now pointing out similarities between the two on questions of miracles and devotions in modernity. Such similarities seem mostly to be found at the popular level, McGreevy pointed out; elite Protestants were more decidedly averse to Catholic devotional culture. He also said that Orsi, as a religious studies scholar, is wrestling with large questions like “what is religion?” McGreevy himself is more concerned with the conventional narrative of U.S. history and how to “fit” Catholicism into that narrative.

Near the end of the seminar, several exchanges dealt with Jesuit institution-building and interaction with other religious orders and ecclesiastical authorities. Philip Gleason (Notre Dame) pointed out that Jesuit schools provided financial support to students and that as many as 25 to 30 percent of the students were Protestant; he also raised the question of relations between Jesuits and bishops. Maria Williams (University College London) pointed out that Jesuits exercised indirect influence by providing retreats for women religious; McGreevy added that they also heard confessions and gave exhortations to different women’s religious communities. He agreed that Jesuits gained visibility as well as financial support through these activities.