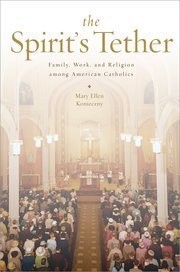 Recent years have seen a spate of books and articles bewailing our bifurcation into opposing ideological camps whose members find it difficult to understand each other, or even to admit that the other side’s adherents are “real” Americans. Regrettably, according to Mary Ellen Konieczny, the same spirit has infiltrated American Catholicism. Her goal in The Spirit’s Tether: Family, Work, and Religion among American Catholics is to understand how polarization among American Catholics over the neuralgic issues of family, sexuality, and the role of women is “supported, shaped, and intensified” by the parish settings in which they choose to worship (3). In so doing, she hopes to help foster the “Common Ground” called for by the late Cardinal Bernadin, to whom the book is dedicated.

The book is an extended case study and a theoretical reflection on two large Midwestern parishes whose congregations are similar in socio-economic status and stage of family formation. Both are located in ethnically diverse and gentrifying urban neighborhoods, although their own ethnic composition does not completely reflect this larger diversity. Where the two parishes differ is in their religious orientation and practice: Our Lady of the Assumption parish enacts its neo-traditional theology in a “high” style of worship, both in the way the Mass is celebrated and in its revival of private confession and pre-Vatican devotions such as novenas and the rosary. The dominant metaphor for this congregation, Konieczny states, is the Church as a sacred family, and its teaching emphases on ecclesial doctrines of sexual morality reflect this metaphor. St. Brigitta, in contrast, expresses its progressive theological orientation in “low church” liturgies, pushing the boundaries of official practice by lay preaching during Mass and general absolution in communal penance services. The dominant metaphor for this congregation is the Church as a community of equals, and primary teaching emphasis is on themes of social justice.

The book draws on 20 months of ethnographic fieldwork conducted between 2000 and 2002, together with 38 open-ended interviews (19 in each parish) with staff, lay leaders, and parishioners the staff recommended. As part of the fieldwork, Konieczny regularly attended the family Mass at each parish as well as small faith-sharing/discussion groups and other events. The result is a richly detailed picture of life and worship in two very different congregations, each reflecting one of the two poles around which moral and ideological debates cluster in the American Church today.

Konieczny identifies two parish-level processes that support this polarization: congregational metaphors as enacted in worship and the construction of each parish member’s religious identity through their participation in parish life and ritual. The first part of the book describes these processes. Chapter One describes the worship styles and metaphors at each parish. Assumption’s central metaphor of the Church as a sacred family is reflected in the congregation’s image of Mary as the model of motherhood, and of St. Joseph and the local priests as models of the Fatherhood of God. The call to be a sacred family is mirrored in the architecture of the church building, and in the reverential ritual practices of the worshipers. At St. Brigitta, on the other hand, the family Mass is held in the gymnasium, modified with a movable altar, chairs, and seasonal decorations. Reflecting the metaphor of the Church as a community of equals, the worshipers participate in a dialog homily and in numerous faith-sharing groups. In contrast to Assumption’s atmosphere of Divine transcendence, St. Brigitta’s worship emphasizes the sacred in the ordinary.

Chapter Two discusses the second process by which religious polarization is sustained: the role of each parish’s worship and other activities in shaping its members’ identity and sense of belonging. This chapter draws more on Konieczny’s 38 interviews than on her observations of the parish liturgies. In these interviews, she finds a recurring theme: members who found their former experience of Catholicism to be lacking in some way made the deliberate choice to attend a parish that addressed this lack. Their subsequent experiences in these parishes built up a distinct “community of memory” through
which they viewed their Catholic identity. Both congregations also defined this identity, at least in part, in opposition to other groups within the Church. Assumption parishioners compared themselves to “less devout” Catholics elsewhere: “For post-Vatican II Catholics at Assumption, most churches are fraught with uncertainty, blandness, religious illiteracy, and an experience of parish life that is more social than religious” (80). In contrast, the parishioners at St. Brigitta constructed communities of memory that reflected their earlier struggles with Church teaching, and their current dissatisfaction with many of its institutional and hierarchical aspects.

The second part of the book consists of three chapters that explore how the congregational metaphors and the identity construction discussed in Part One shape and sustain the parishioners’ attitudes toward marriage, children, and work. The metaphor of the sacred family leads the priests and parishioners at Assumption to focus on following Church teachings on abortion and contraception, on actively shielding their children from a corrupt and corrupting world, and on valorizing the work of stay-at-home mothers. Couples at St. Brigitta, on the other hand, told of finding God in their romance and courtship rather than in family life after marriage, and they were reluctant to discuss topics such as abortion and contraception. While they agreed with the parishioners at Assumption that the larger culture advocated values and practices that were undesirable, they were more confident that their children’s instinctive spirituality would, with parental guidance, be able to resist these blandishments. They also considered adolescent rebellion and rejection of Church practice to be a natural developmental stage that they hoped their children would outgrow in time, as they themselves had. Unlike Assumption mothers, St. Brigitta mothers were more likely to list a professional identity (teacher, social worker, lawyer) first, even if they were currently “on leave” from actually practicing it.

Konieczny notes that neither parish’s approach to marriage, family, and work was without contradictions. She documents the ambivalence that Assumption’s stay-at-home mothers felt about having left the paid labor force, and the tension that the parish’s working mothers felt in a religious environment that privileged their maternal role over careers that were personally fulfilling or economically necessary. In contrast, she notes that there were relatively few supports at St. Brigitta for women who made the choice to leave the labor force to care for their children full-time. Religious meanings of motherhood per se were mostly absent from discourse at St. Brigitta; even Mary was celebrated more for her care for others (e.g. St. Elizabeth) or for her connection to the poor, rather than for “her daily tasks as the mother of a child” (224).

It is perhaps unfair to fault the book for the aspects of Catholic parish life that it did not discuss. Any parish is far more varied in the way(s) it enfleshes and expresses Catholicism than a single book could possibly cover. So the following may be more suggestions for future researchers than a critique of any lack in the present work, and are offered in that spirit.

First, the ideological frames that structure any identity are developed in myriad social settings. One’s identity as a particular kind of Catholic may be formed and sustained in other venues than Sunday liturgies, devotions, and small discussion/faith-sharing groups. Konieczny notes that there were more than 60 different groups or organizations at St. Brigitta in which members could participate, but she provides examples of religious identity formation and congregational metaphor development only in the context of Sunday liturgy and small faith-sharing groups. A key involvement setting that has been omitted is parental interactions in the parish schools, assuming that such schools exist in the two parishes. If such schools do not exist, then religious education classes might be places of Catholic identity construction, both for the students and for the volunteer teachers. Other opportunities for identity construction might be parish sports leagues, young adult groups, or even the parish festival planning committee. Konieczny mentions that Assumption parishioners disparaged such social activities, so it is unclear how many are offered there. But if they do not exist, this difference itself is worthy of note. Konieczny also mentions that the other Sunday Masses at each parish were quite different from the family Masses she regularly observed: how did these differences impact Catholic identity formation and ideological frames at each parish?

Group identity is also formed through boundary marking and conflict across boundaries. Members of both parishes defined themselves by their opposition to other, less satisfactory forms of Catholicism. But the “other” at Assumption was seen as being Catholics at other parishes, while the “other” at St. Brigitta’s was the institutional Church and its hierarchy. Boundary construction against the former may be more successful than the latter in reinforcing group identity over the long term, since children at St. Brigitta’s may begin to wonder why they should be part of the Church at all. Konieczny provides some evidence that this defection is already occurring as the children at St. Brigitta’s reach young adulthood (e.g. p. 174). A further examination of the differential success of each strategy would be a fascinating topic for future research.

In the end, the success of any “Community of Memory” is the extent to which it can be transmitted to subsequent generations. Studies of American Millennials have found a steady increase in the percentage claiming no religious affiliation, and non-Hispanic Catholic Millennials do not differ from their age peers in this regard. If Assumption’s model of the Church as a sacred family does not adequately address the tensions its women parishioners feel in combining a career and family, if St. Brigitta’s locating of the sacred in the ordinary fails to address its female members’ need for religious meaning in the daily work of motherhood, then “the gap between experience and religion may at times become so large that Catholicism recedes from most of life” (239). The poles of Catholic identity that Konieczny so ably describes in this book need to engage in a true dialog, exploring their respective strengths and weaknesses in a search for common ground. Her research is a valuable initial step in this direction.