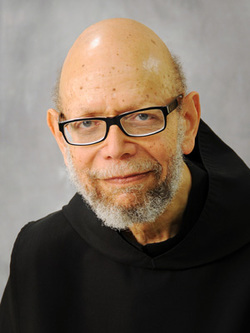 Father Cyprian Davis, OSB, of St. Meinrad Archabbey in Indiana, died on May 18. He was 84. Father Cyprian’s six books, including The History of Black Catholics in the United States (Crossroad, 1990), which won the American Catholic Historical Association’s John Gilmary Shea Prize, represented a groundbreaking contribution to the history of American Catholicism. He was also an active participant in the life of the Church, serving as archivist for the National Black Catholic Clergy Caucus, of which he was a founding member, and contributing to two pastoral letters, “Brothers and Sisters to Us” (1979), and “What We Have Seen and Heard” (1984). We asked three scholars to contribute brief memorials to Father Cyprian and his work.

I remember well receiving my first copy of Cyprian Davis’s The History of Black Catholics in the United States. My dad came across a copy standing inconspicuously on a shelf while on retreat and picked one up for his son. Neither my dad nor I knew then that this book had launched a generation of scholarship. Black Catholic history had never truly been told before Davis’ classic. Sure, books had been written about the Church and “the Negro.” But these doubled as defenses of the Church’s relationship to African Americans. Black Catholics remained a problem rather than a people. All that changed with Davis’ History. He combed a breadth of sources and recovered Black Catholic voices ranging from African Catholics to baptized slaves to the sisters, priests, and laypeople who fought for the Church to become as “catholic” as it claimed to be.

Perhaps even more so than the book itself, among Davis’ greatest legacies was his insistence that scholars restore African Americans to the history of Catholics in the United States. Davis opened his preface with a story of an anonymous “Ethiopian” baptized in Carthage. We don’t know his name, yet he is present nonetheless. This passing reference in early sources to a dark-skinned convert serves as a reminder to us all: “in the rich background of church history, there are images that we have chosen not to see…Still, they have been there, and the church has been marked by their blackness” (x). This clarion call remains just as poignant today as it did 25 years ago.

Father Cyprian took the skills he honed as a historian of medieval monasticism and applied them to the subject of Black Catholic history in order to meet a deep pastoral need. As Black consciousness was rising in the 1960s and ’70s, Black Catholics began to ask Father Cyprian to tell them about their particular history. Ever modest and honest, Father Cyprian had to acknowledge that this was a history he did not know. Neither he nor they were willing to let it stand at that. They had a history and they would know it. Father Cyprian would dedicate himself to doing what had not been done before—to write a comprehensive history of Black Catholics in the U.S. from biblical and African roots to the middle of the 20th-century.

Whenever he could say “yes” to an invitation, he did. His “yeses” made all the difference in how Black Catholics understood themselves, their ancestors in the faith, and their contributions to the Catholic Church. According to his fellow monks, he kept a bag packed and ready to go because he was called upon so often.

In the last couple of years of his life, Father Cyprian’s suitcase did not get much use. Though he would have liked to continue, his health did not permit too much of that. His last major public event was in April 2015, when the IBCS celebrated the 25th anniversary of the publication of The History of Black Catholics in the United States. People from all over New Orleans and beyond packed an auditorium at Xavier to see Father Cyprian and to thank him for his gift of history. After the lecture was over, Father Cyprian stood for a very long time taking pictures, shaking hands, and receiving hugs, kisses, and words of appreciation from all who wanted a chance to be with him once more.

I was there watching it all happen. I believe he was genuinely happy to know that his work had such great meaning for the community. He said to me before we left the auditorium, “People are so kind.” Well, true. But it is also important to note that the kindness he felt was simply returned to him for being a caring priest, an outstanding scholar, a dedicated and expert teacher, and especially for fulfilling what he himself defined as the historian’s task, “to make the past speak, to highlight what has been hidden, and to retrieve a mislaid memory.”

I first became acquainted with Father Cyprian Davis, OSB, in 1993 when I read his seminal work, The History of Black Catholics in the United States. I was a graduate student at the time in search of a dissertation topic. It seemed to me that Father Cyprian had written this book with graduate students particularly in mind, because he indicated areas of black Catholic history that required further research and where promising archival materials existed. I considered his pronouncement, “There is no adequate history of any of the black Catholic sisterhoods [115],” a commission—if not a mandate—to pursue my study of the Oblate Sisters of Providence. I contacted Father Cyprian by mail, and he graciously suggested possible directions and sources for my research.

I first met Father Cyprian in person at the American Catholic Historical Association meeting in New York in 1997. When I revised my dissertation into a book manuscript, he agreed to serve as one of my readers, again offering valuable insights and suggestions. As a member of the Black Catholic Theological Symposium since 2001, I had the pleasure of interacting both intellectually and socially with Father Cyprian during our annual meetings. Throughout our association, he impressed me as a masterfully erudite scholar and a generous, supportive human being.

Knowing Father Cyprian has enriched my faith, my intellect, and my consciousness as an African American Roman Catholic. He will always remain for me the consummate role model of a scholar, mentor, and pioneer in the discipline of history.