The Nun in the World 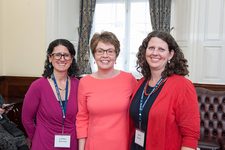 Many HWR members, old and new, joined the Cushwa Center staff and a variety of scholars from around the world from May 7–9 at Notre Dame’s London Global Gateway for a symposium titled “The Nun in the World: Catholic Sisters and Vatican II.” The symposium, several years in the making, was co-organized by Kathleen Sprows Cummings of the Cushwa Center, Alana Harris of Oxford Brookes University, and Carmen Mangion of Birkbeck College, University of London. It received support from Notre Dame International’s Global Collaboration Initiative, which funds joint work between Notre Dame faculty and scholars at international universities, and Durham University’s Centre for Catholic Studies. 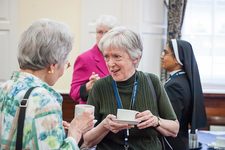 Named after Leon Joseph Cardinal Suenens’ 1962 book, The Nun in the World: New Dimensions in the Modern Apostolate, the symposium asked scholars to follow in Suenen’s footsteps by correlating the contemporary world and sisters’ lives and work. Scholars from 10 countries contributed studies of congregations and their work in the post-Vatican II era, with a particular focus on transnationalism, meaning both the relationship of women’s religious institutes to the Vatican, and the international networks of the women themselves as they established mission outposts, corresponded between houses, and exchanged cultural and theological insights with sisters from other countries and with the laypeople they served. How did women religious make sense of the changes in religious life that followed from Vatican II, and how did local and global circumstances shape their lives? 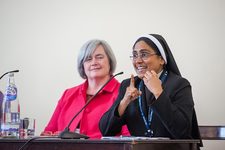 Maryann Madhavathu, CMS, of Catholic University of Leuven, presents her paper, "The Roman Catholic Church as a Transnational Actor of Leiturgia in Global History through the Mission of Women Religious of CMS" as Catherine Higgs of the University of Tennessee, Knoxville, looks on.

Invited by the Council to renew their lives and examine their founding charisms, women religious returned with gusto to the sources of their orders, finding the experience both painful and exhilarating. The description of these experiences during the 1960s and 1970s, as sisters examined their lives and practices, and their consequences for religious life as lived in the 1980s, 1990s, and 2000s, formed the core of the symposium.

In a world simultaneously rocked by the disintegration of empires and a revolution in gender roles, women religious examined their congregational identities (as discussed by panelists including Giovanni Gregorini on Italy, Catherine Maurer on the Sisters of Charity of Strasbourg, Maria Cimperman, RSCJ, on the Society of the Sacred Heart of Jesus, Marie-Thérèse Desouche, xavière, on the Little Sisters of the Assumption, and others); their identities as women (as described in Sabine Rousseau, Heidi MacDonald, and Jessica Whitish in each of their studies of individual sisters, Ryan Murphy’s oral histories of sisters in Philadelphia, and others); and their involvement in national and international racial politics (as discussed by Jillian Plummer and Barbra Mann Wall, on transnational missionary activity, and Shannen Dee Williams, on racism within American communities and the formation of the National Black Sisters’ Conference in the late 1960s, among others.) 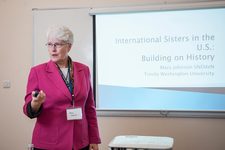 Mary Johnson, SNDdeN, of Trinity University Washington, presents some of the research published in New Generations of Catholic Sisters: The Challenge of Diversity.

Other speakers moved well beyond the post-Vatican II period to examine contemporary trends in religious life, many of which bear the marks of five decades of post-Vatican II debates and events. Patricia Wittberg, SC, Mary Johnson, SNDdeN, and Mary Gautier presented work from their study, published in 2014 as New Generations of Catholic Sisters: The Challenge of Diversity, which has found, unsurprisingly, that as the U.S. church has become far more diverse, with many of the most vibrant sectors of the community being new or recent immigrants from Latin America, Africa, and Asia, vocations to religious life have also trended in an ethnically diverse direction. Caroline Mbonu, HHCJ, of Nigeria, and Mary Johnson, SNDdeN, of the United States, both discussed aspects of “reverse mission,” or the contemporary movement of sisters from the Global South to Europe and the United States. 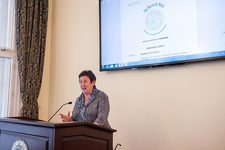 Gemma Simmonds, CJ, of Heythrop College, University of London, presents the closing keynote address, "Where Do We Go from Here? Signs of Vitality in a Much-Changed World."

Keynote speakers Linda Woodhead and Gemma Simmonds, CJ, meanwhile, both discussed problems with the secularization thesis that would predict, among other things, the disappearance of vowed religious life. Woodhead, a sociologist, pointed out that not only is “religion” not going away anytime soon, it is actually growing, albeit in complex forms, where “everything is going all different directions at once” rather than always revealing a coherent story. Simmonds, meanwhile, pointed out that contemporary discussion of the decline of religious life ignores the context: namely, a tremendous historical spike in vocations that occurred during the decades prior to the Council. Simmonds noted that much of the guilt women religious personally feel in the face of declining numbers is inappropriate—cultural, sociological, and historical factors have far more to do with the changes in religious life than any decision made by sisters. And she spoke hopefully about the possibilities for a renewed, if profoundly changed, religious life for the 21st century, one that, she hopes, will be less marked by tribalism, classism, and racial stratification than the religious life of her youth. The role of a smaller group of women religious in this world will be as it has always been, she said: by divesting themselves of public power and prestige, these women will present an image of the face of Christ to the world. Their focus will be on the communal, the mystical, the transformative, the ordinary. In her research for the Religious Life Vitality Project (see below), she found that contemporary sisters are paying little attention to the survival or maintenance of their communities, but focusing instead on the freedom they found in committing to mission, fidelity, and authenticity. 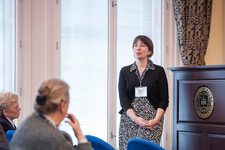 Another theme of the conference had to do with the relationship between women religious and the institutional Catholic Church. Keynote speakers Susan O’Brien and Anne O’Brien (no relation) both discussed the tension between sisters’ self-understanding of their mission, which has generally been prophetic, oriented towards the care of the poor and marginalized, and often independent of direct male inspiration or control, and the Church’s demand for their service in other areas, ranging from teaching the children of the upper class to providing laundry and cooking services for priests. Multiple panelists investigated sisters’ political activism, finding that when they integrated schools (as in apartheid era South Africa, described by Catherine Higgs), lobbied Congress on behalf of Central American farmers in the 1980s (as described by Theresa Keeley), or engaged with politics in the present-day United States (as described by Joel Schmidt and Mary Anne Foley, CND), their bona fides as women religious were questioned by those who opposed their work. Yet, no surprise to those who study sisters, scholars also found that women religious have been able to call on both tremendous moral support from laypeople and some clergy when in conflict with elements of the hierarchy, and establish their own powerful structures of national and international cooperation. 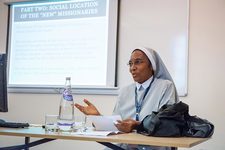 Participants raised many questions for further research, including: How did sisters work with ecumenical groups, NGOs, governments, and other organizations to implement their mission work? What was the significance of their communication in phone calls, letters, telegrams, and other media in changing work and life on the ground in different communities? How have relationships between sisters and laity changed over the decades? How did sisters’ racial, class, and gender assumptions shape their work on the ground, especially in “missionary” communities?

Immediately following the symposium’s conclusion, there was a presentation of the Religious Life Vitality Project, a collaborative project undertaken by the Centre for Catholic Studies at Durham University, the Margaret Beaufort Institute of Theology at Cambridge, and the Religious Life Institute at Heythrop College, and generously funded by the Conrad N. Hilton Foundation. The project examined contemporary vowed women’s lives in Britain and Ireland. Presentations by Paul Murray, the principal investigator, Catherine Sexton, and Gemma Simmonds, CJ, explored the project's methods and findings. A few of the project’s findings are mentioned above in the description of Simmonds’ keynote. 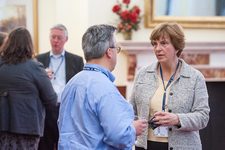 For more details about the symposium, visit globalsistersreport.org/series/nunintheworld for Dan Stockman’s excellent series of articles for Global Sisters Report.

Turning toward the future of the study of Catholic sisters’ global migrations, the Cushwa Center is currently seeking grant support for a planned follow-up conference to be held April 6–8, 2017, at the University of Notre Dame. Titled “‘Too Small a World’: Catholic Sisters as Global Missionaries,” the conference will further explore themes of transnational mission history developed in London. Be on the lookout for the call for papers, which will be released in February.

Updated June 2017. A version of this recap appeared in the History of Women Religious section of the Fall 2015 American Catholic Studies Newsletter.