Friends of Cushwa news and notes

American Catholic Studies would like to announce changes to its editorial board. Rodger Van Allen has retired as co-editor of the journal, a position he held since 1999. It was under his leadership and vision that the journal was relaunched and re-envisioned from the former Records of the American Catholic Historical Society of Philadelphia. Rodger is succeeded by Nicholas Rademacher of Cabrini University, who now co-edits the journal with Thomas Rzeznik of Seton Hall University.

This summer, Jeffery R. Appelhans (University of Delaware), recipient of a Cushwa Center Research Travel Grant in 2014, successfully defended his dissertation, “Catholic Persuasion: Power and Prestige in Early American Civil Life,” which explores Catholics’ ability to develop political, ideological, and cultural credibility by mastering the art of political aesthetics, enabling them to secure prominence in the public sphere and civil society. He argues that early American Catholics became culture sculptors, drawing together ideology and expression to join immediately in the mutual construction of American political culture in ways and at levels scarcely appreciated.

Paolo L. Bernardini, a member of Cushwa’s Rome Advisory Committee, has been appointed inaugural Ives Visiting Distinguished Professor of Humanities at Youngstown State University for the academic year 2018–2019. He will teach four classes in history and Italian literature, enjoy some relaxing Midwestern atmosphere in the hometown of the Cushwa family, and work on a research project on Italians of Youngstown. David S. Ives was a professor of modern and classical languages at Youngstown State who left a substantial endowment to the university that provides funding to bring humanities scholars from around the United States and abroad to teach and conduct research at the university.

Cabrini University is very proud to announce the launch of its newest journal, Praxis: An Interdisciplinary Journal of Faith and Justice. Sponsored by the Wolfington Center at Cabrini, Praxis will advance the intersection of theory and practice in the pursuit of social justice. It will provide an opportunity for practitioners and scholars together to consider the Catholic social tradition and other faith-based traditions of social justice. Jeffrey Gingerich (provost of the University of Scranton) and Nicholas Rademacher (chair and professor of religious studies at Cabrini) serve as executive editors. Ray Ward (associate director for Peace and Justice in the Wolfington Center) serves as managing editor. Praxis will be published biannually, with a themed spring edition and an open fall edition. The first two issues will be open access; subsequent issues will require a subscription. The editorial board is seeking peer reviewers for future editions. Potential peer reviewers can reach out to Ray Ward at rew68@cabrini.edu. The spring 2019 issue is devoted to migration, with submissions due January 15. Calls for papers and more information can be found at pdcnet.org/praxis.

Funded by grants from the State Library of Ohio and the Hamilton County Genealogical Society awarded to the Archdiocese of Cincinnati Archives, the Catholic Research Resources Alliance has digitized, indexed, and posted online issues of The Catholic Telegraph—one of the oldest diocesan publications in the United States—from its founding in 1831 through 1885. Issues are text-searchable and available to read at thecatholicnewsarchive.org. A concurrent project with the Public Library of Cincinnati and Hamilton County is also underway to digitize the newspaper from 1831 to 1922. Issues are being posted on their digital library at digital.cincinnatilibrary.org/digital. There are plans to pursue additional funding to digitize additional content.

William S. Cossen (2013 Research Travel Grant Recipient) has been awarded a travel grant from LSU Libraries for his research project, “Soldiers and Sacraments: The Lived Catholic Civil War.” Over the past year, he has written three articles appearing in The Washington Post: “A group of Catholics has charged Pope Francis with heresy. Here’s why that matters” (October 16, 2017, with Erin Bartram); “Donald Trump isn’t the first politician to focus on the ‘right’ kind of immigrant” (January 12, 2018); “Religious groups are fighting Trump’s treatment of migrant children. But they didn’t always oppose ripping kids from their parents” (June 9, 2018).

In September 2018 at Duquesne University, Paula Kane delivered the fourth annual Karl Stern Lecture, “Confessional and Couch: A Rebellious Priest at the Dawn of Psychoanalysis.”

Billy Korinko (University of Kentucky) has been appointed visiting assistant professor in women’s and gender studies at Berea College.

Joseph Mannard’s article “Our Dear Houses Are Here, There + Every Where: The Convent Revolution in Antebellum America,” published in American Catholic Studies (summer 2017), received first place in the category Best Feature Article in a Scholarly Journal for 2018 from the Catholic Press Association.

The 2018–2019 schedule for the Newberry Seminar on Religion and Culture in the Americas is now posted. For details and the full schedule, visit newberry.org/newberry-seminar-religion-and-culture-americas.

Jason Sprague (University of Iowa) recently accepted a position as a part-time lecturer at the University of Michigan-Dearborn, teaching world religions.

In the wake of August’s grand jury report on clerical sexual abuse in six Catholic dioceses of Pennsylvania, Cushwa Center director Kathleen Sprows Cummings issued a call to action in a New York Times op-ed, “For Catholics, Gradual Reform is No Longer an Option.” In the weeks that followed, Cummings interviewed about the scandal with media outlets including the Associated Press, The Washington Post, and NPR’s Morning Edition. Visit Cushwa’s “in the media” webpage for links to the latest articles and appearances: cushwa.nd.edu/news/in-the-media.

Barbra Mann Wall (University of Virginia) was invited to give the commencement speech at the University of Texas at Austin School of Nursing in May 2018.

165 archivists, religious leaders, and historian/scholars assembled at Boston College from July 11 to 13, 2018, to initiate a discussion on managing Catholic religious archives for the future. With many communities facing completion or merger into groups representing a specific charism, the conference was designed to identify the issues facing religious communities and provide an opportunity to learn about different options available for preserving collections. The three-day conference allowed archivists, leaders, and scholars to interact, thereby providing a unique forum for beginning to address these serious concerns.

Conference participants hailed from 27 states as well as Canada, Ireland, Scotland, and Italy. Archivists made up the majority of attendees with 102 present, followed by 34 scholars and 28 religious leaders. 103 lay persons and 62 religious attended the meeting. The largest religious charism represented was the Franciscans (21), followed by Sisters of Saint Joseph (12), Diocesan archivists (11), Ursulines (8), and Dominicans (7). Panels raised the questions: Why are we here? What do we know? How do we transmit our charisms to the future? And finally, what are the options? After each major presentation, participants shared thoughts in groups of 10. These lively discussions were summarized and along with the presentations and evaluations will be collated to form the basis of a white paper that will be circulated from January to July 2019. This discussion will yield a national strategic plan which will be shared with the Catholic Church’s national leadership. Video of all the major presentations will be posted on the conference website catholicarchives.bc.edu. This will allow individuals not present in July to get involved in the discussion in the coming months and respond to the white paper.

The conference was well received. One of the participants, Angelyn Dries, O.S.F. (professor emerita at Saint Louis University), commented: “Three groups that normally would not intersect at professional conferences had a chance to engage in conversation, raise questions and discuss issues key to their stage of development: leaders of congregations of men/women religious, archivists, and historians. I found the cross-fertilization of ideas, resources, and expertise to be invaluable to all three groups. The working conference broadened and enhanced the perspective of each group, gave practical assistance, and placed each group’s importance in a wider ecclesial and professional context.”

It is hoped that religious leadership conferences, archival groups, and associations interested in the use and preservation of Catholic historical resources will continue the discussion on how best to save these records. A recent U.S. Catholic article by Rosie McCarty, “The archives that hold America’s history,” provides an excellent synopsis of why these archives are important. 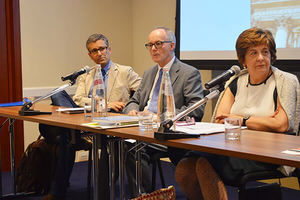 On May 24, 2018, more than 50 colleagues and friends joined the Cushwa Center in Rome to celebrate the publication of Matteo Binasco’s Roman Sources for the History of American Catholicism, 1763–1939. Matteo and the Cushwa Center are grateful to the University of Notre Dame Press, the director and staff of Notre Dame’s Rome Global Gateway, and commentators Irene Fosi and Maurice Whitehead for making this book and its launch a success. Congratulations, Matteo!