What They Wished For: American Catholics and American Presidents, 1960 – 2004 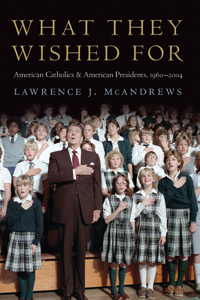 There is no ‘Catholic vote,’” columnist E.J. Dionne noted during the 2000 presidential campaign, “and yet, it matters.” Absent the ethnoreligious ties that once bound most immigrant voters to the Democratic Party, Catholics now cast lots for a seamless garment. Only the lots are partisan ballots, and the garment, to borrow Cardinal Joseph Bernardin’s imagery, represents the Church’s “consistent ethic” that promotes the common good and asserts the sanctity of life. Portions of each major party’s platform promote this ethic; other sections directly challenge it. As a result, Dionne argued, “Being a Catholic liberal or a Catholic conservative inevitably means having a bad conscience about something.”

Catholic leaders and parishioners debate how to translate Church teachings into public policies for a pluralistic society. Divided by class, ethnicity, ideology, race, and theology,

U.S. Catholics rarely speak with a unified voice. Indeed, the history of the U.S. Conference of Catholic Bishops reads as a primer on balancing competing personalities and perspectives. Even so, Lawrence McAndrews argues, crosscutting loyalties and ongoing debates have not stopped Catholics from leaving their mark on national politics. Presidents quote popes, candidates court “swing” Catholic voters, and on Election Day, Catholic majorities usually break for the victors. There may be no single “Catholic” voice or voter, but Catholics matter all the same.

In What They Wished For, McAndrews details Catholic efforts to influence presidential policies and priorities from 1960 to 2004. Drawing on a diverse array of private and published sources, from White House memos and speeches to bishops’ personal notes and editorials, McAndrews shows how Catholics have transformed national political conversations even as they struggled to advance specific policy proposals. In 1991, for instance, George H. W. Bush ordered U.S. troops to expel Iraqi military forces from Kuwait, despite concerns raised by Pope John Paul II and members of the U.S. hierarchy, led by Cincinnati Archbishop Daniel Pilarczyk, regarding the Persian Gulf War’s necessity and proportionality. Catholics could not prevent the conflict, but they did, in the words of George Weigel, force White House and Pentagon officials to seriously grapple “with the moral criteria and political logic of the just war tradition” (255).

McAndrews argues that Catholics have repeatedly drawn on Church teachings and traditions to inform debates with the White House over war and peace, social justice, and life and death. Some chief executives, notably John F. Kennedy, responded by publicly distancing themselves from the Church’s most polarizing stances. Others, such as Richard Nixon and George W. Bush, wooed bishops and parishioners. Each president has sought to channel Catholic political pressure to serve his own ends. None could afford to leave Catholic calls for peace and justice, at home and abroad, unanswered.

John F. Kennedy’s 1960 electoral victory over Nixon and John F. Kerry’s 2004 defeat to George W. Bush bookend McAndrews’ study,highlighting Catholics’ growing acceptance and assertiveness in national politics. Despite their shared identities as Massachusetts Irish-Catholic Democratic senators and war veterans, Kennedy and Kerry met with vastly different receptions. In 1960, many white, second- and third- generation American Catholics enjoyed growing incomes and endorsed middle-class sensibilities, but their place in largely Protestant society remained uncertain. Circling the wagons after Kennedy’s nomination, Catholics strongly supported his campaign and often equated voting Democratic with defending their ethnic and religious identities. Acting as members of an ethnoreligious community, many Catholics valued group cohesion over ideological differences. By 2004, however, Catholicism sat firmly in the mainstream, and group ties had given way to infighting. “More affluent and less aggrieved than the Catholics of 1960,” McAndrews concludes, “Kennedy’s offspring became Kerry’s orphans” (13). Just five decades after propelling one of their “own” into the White House, the majority of Catholics voted against the other J.F.K.

What They Wished For builds upon The Era of Education, McAndrews’ 2006 study of presidential politics and education reform between 1965 and 2001. Like Era of Education, the work under review features chronologically arranged chapters, each organized around clearly-defined themes. McAndrews dedicates one chapter to each presidential administration, and further subdivides each chapter into three self-contained sections, which focus on a contemporary issue related to war and peace, social justice, and life and death, respectively. For instance, in Chapter Five, “Catholics and Jimmy Carter,” he describes Catholic-White House interactions between 1977 and 1981surrounding détente and the Soviet invasion of Afghanistan, proposed national health insurance, and abortion. Rather than attempt a synthetic, and possibly sprawling, narrative that touches on nearly every instance of Catholic cooperation or conflict with the White House, McAndrews selects representative examples to illustrate each era’s political contexts, contingencies, and prominent personalities.

In contrast to Era of Education, which argued that Catholic bishops made little headway in directing federal aid and assistance to parochial schools, What They Wished For highlights several high-profile examples of successful Catholic lobbying. In the realm of war and peace, for example, the U.S. bishops’ Reagan-era pastoral “The Challenge of Peace” earned Cardinal Bernardin a Time cover story and encouraged Admiral James Watkins of the Joint Chiefs of Staff to reimagine the United States’ offense-minded, land-based nuclear deterrence strategy. Similarly, while Catholic Health Association officials provided a template for the Clinton Administration’s health care reform proposal, they later joined with U.S. bishops to defeat the plan over concerns about funding for abortions.

McAndrews particularizes each political controversy and issue position, basing his analysis on well-rounded, “thick” historical descriptions of politics, culture, and religion. His treatment of the “urban crisis” confronting George H. W. Bush, for instance, references the 1992 Los Angeles riots, the sitcom Murphy Brown, and the encyclical Centesimus Annus. Even so, several themes cut across multiple issues and presidencies. I will highlight six: anti-Catholicism and autonomy, anti-communism and abortion, and active and effective politics.

John F. Kennedy’s 1960 election “opened the door to the White House” for U.S. Catholics, ushering in a contentious era for bishops and parishioners (14). In part to prevent accusations of church-state collusion, Kennedy rarely consulted prelates in public and supported population control measures in spite of the Church’s stance on contraceptives. Yet the goodwill generated by Kennedy’s “Camelot” and Vatican II’s ecumenism defused popular anti-Catholicism, leading Republican as well as Democratic candidates to curry favor with middle-class white parishioners. By the early 1970s Catholic voters became increasingly autonomous, many splitting with their bishops and coreligionists over Humanae Vitae and other issues related to the larger “culture war” between modernists and traditionalists. Meanwhile, bishops condemned these developments, opposing unbridled market individualism and identifying with Catholic social teaching, especially after Richard Nixon’s welfare reform proposal met with legislative failure.

Bishops’ unequivocal embrace of the common good pleased the political left, while conservatives applauded the bishops’ opposition to communism and abortion. From 1960 to 1973, the threat of Soviet atheism dominated Catholic political thought, and leaders such as Cardinal Francis Spellman firmly backed Kennedy’s and Lyndon Johnson’s efforts to prop up the South Vietnamese government and protect Catholic civilians. But support for the war declined under Nixon, accelerated by U.S. incursions into Cambodia and Catholic anti-war activism. By the time Gerald Ford assumed office, Church leaders were shifting focus, helping to resettle war refugees and crusading against the Roe v. Wade decision on abortion, which remains the most divisive and salient “life and death” issue facing the U.S. Church.

Vietnam and abortion exemplify two of the tensions that have frustrated Catholic efforts to enact policies and legislation. The first divide stems from the struggle to reconcile activist impulses with reflective deliberation. At the height of the Vietnam War, for instance, Father Philip Berrigan and others discussed plans to “do something” to stop the bloodshed. Federal authorities soon intervened, but to Berrigan’s anti-war supporters, the bishops’ emphasis on pastoral letters and consensus appeared as an excuse to “do nothing.” Similarly, activists on both sides of the abortion divide traded extremist rhetoric after bishops failed to agree on language for a proposed pro-life constitutional amendment during Nixon’s presidency. Growing public support for pro-life positions also speaks to a second tension: political affects versus effects. The annual March for Life and related activities have raised abortion’s profile in civic culture, even as Church-backed legislative and legal efforts often ground to a halt. To paraphrase Geoffrey Layman’s 2001 findings in The Great Divide, religion remains more adept at influencing politics indirectly through culture than directly through lobbying.

Still, questions of classification and political influence remain. In today’s diverse and partisan political landscape, what exactly defines “American Catholicism”? Groups of self-identified Catholics held opposing views on every issue detailed in McAndrews’ study, and Pope John Paul II spoke of the “American” Church in hemispheric as much as national terms. McAndrews describes U.S. Catholic political engagement as a largely top-down process, where bishops and their sponsored organizations operate as an interest group advancing Church doctrine. Future works, I hope, will broaden this scope by further examining the views and activities of other Catholic leaders and activists. Comparative works that analyze these developments alongside the history of the Religious Right, as one example, would also expand our understanding of how Catholicism fits within the larger “culture war” thesis and clarify the Church’s relative contributions to U.S. politics.

What They Wished For will appeal to a wide audience of students, scholars, and general readers. McAndrews’ work should aid historians interested in 20th century U.S. topics, as well as scholars examining the clout of earlier generations of politically-active Catholics. Political scientists focused on religion and politics or the presidency will benefit from McAndrews’ attention to historical detail and contingency. Instructors can assign the entire book, or select excerpts from the thematic chapter sections to ground lectures and discussions. Readers interested in tracing political themes across papacies and presidencies, or in predicting how politics may shape Pope Francis’ upcoming U.S. visit, will similarly find this essential reading.

This review was originally published in the Spring 2015 issue of the American Catholic Studies Newsletter.