Black Saint of the Americas: The Life and Afterlife of Martín de Porres 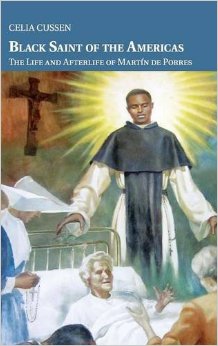 How does one become recognized as a saint by the Catholic Church? Why do people spend extraordinary amounts of time, energy, and money convincing the Holy See to raise men and women “to the dignity of the altar”? Why does it matter who those people were, what they did, and what their communities thought about them? And why does the saint-making process take so long?

Celia Cussen’s Black Saint of the Americas: The Life and Afterlife of Martín de Porres takes on these questions and more. And as with many other histories, the answer supplied therein is both simple and complex: It depends. In the case of this limeño lay Dominican, it depended on his racial status, his gifts as a healer, and the performative aspects of 17th-century Catholicism in colonial Lima. As his centuries-long canonization process shows, these things mattered a great deal.

Cussen seeks to reconstruct both the life and afterlife of Martín de Porres. His life was interesting enough, but it is his afterlife that especially interests Cussen and will appeal to other historians. She claims that “through the textual and visual language . . . used to portray the saintliness of Fray Martín, limeños, particularly members of the local elite, thought about some of the meanings of African origins and mixed ancestry, even as they reflected on the nature of death and the sacred body, approaches to healing, and, ultimately, claims to Spanish control over the Peruvian landscape” (5).

Readers familiar with Emma Anderson’s well-received The Death and Afterlife of the North American Martyrs (Harvard University Press, 2013) will immediately recognize Cussen’s scope, categories of sources, and general ambition, as her approach is similar. Black Saint of the Americas “looks at the life and afterlife of one holy man within a landscape of complex and highly dynamic cultural and social processes,” using de Porres’ cult “as a lens through which we can see more closely . . . and more clearly broader notions of faith and society in the colonial world” (4-5). That Cussen’s approach is similar to Anderson’s is no condemnation; on the contrary, Black Saint of the Americas deserves as much praise as Anderson’s book, which was the topic of the Cushwa Center’s Fall 2013 Seminar in American Religion.

More generally, Cussen’s analysis speaks strongly to three broad categories: race, the role of saints in the Catholic worldview, and the relationship between multiple centers and peripheries.

Black Saint of the Americas engages race in a way that reveals the historical meaning behind Martín de Porres’ identity as a mulatto in colonial Lima. Indeed race was central in both de Porres’ earlier and latter saintly cult, connecting contemporary reverence for mulattos as healers with the Dominican’s 20th-century utilization as proof “that the Catholic Church had always been at the ready to embrace [Africans and their descendants] and provide for their spiritual well-being and protection” (187). Cussen notes that in 17th-century Peru, limeños viewed black slaves as both “potentially treacherous and prone to violence” and “sturdy, trusted, and indeed indispensable participants in colonial life” (25). When African Americans embraced Martín de Porres in the 20th-century United States, they did so in the midst of a white-dominated racial atmosphere that often agreed on blacks’ putative treachery and violence. But while white Americans conceded blacks’ necessity in the economic order during the same period, many doubted they could be trusted. Sainthood for Martín would give African Americans international support for the dignity denied them in their own country.

On this point—the “usefulness” of the saints for various constituencies—Cussen excels, too. Because canonization only confirms an individual’s saintliness, the process achieves nothing for the person in question. Being “raised to the dignity of the altars” is purely an earthly honor. But the seal of approval conferred by beatification and canonization means that devotees officially can “put to use” these holy men and women. This “usefulness” thread runs through the book. Cussen offers the better-known example of Our Lady of Guadalupe, who transitioned from ethnic intercessor to political liberator by the time of Iberian decolonization (46). Those devoted to Martín de Porres likewise prayed for his intercession for a multitude of reasons, ranging from the relatively mundane task of healing maladies to helping combat “the impression among non-white people that the Catholic Church is not Catholic but only Western-White,” as claimed by New York’s Blessed Martín Guild in 1935 (193).

From limeños calling on Martín in the 17th century to New Yorkers petitioning the Holy See to canonize him the 20th, the cult of the Black Saint of the Americas crisscrossed continents and oceans and bound the Catholic world together in a way only possible in the world’s oldest and largest transnational organization. Cussen expertly draws out these connections, especially between multiple “centers” and “peripheries” over time. For instance, Cussen’s narrative of the early investigations into de Porres’ holiness notes that while Rome had the final say, it was the testimonies of the Dominican’s devotees in Lima that provided the raw material for Vatican deliberations (107). But it seems that two different conversations took place, and what de Porres represented in Rome was not the same as what he represented in Lima. Cussen notes that “if for the Vatican the beatification of Martín de Porres foreshadowed the assertion of a recovered dignity for people of African descent and the universality of the faith, in Lima his image continued to be that of a man who humbly submitted himself to the old order . . . a bulwark against new currents of thought that threatened traditional hierarchies” (184). Forwarding men and women for sainthood had political repercussions, too, strengthening ties between the periphery—Lima—and the royal center—Spain. By the 17th century the Creole clergy (of Spanish descent and Peruvian birth) had taken an enormous role in the colonial Church. In a religio-political give-and-take, these clergy could promote Spanish imperial interests in return for royal support of native candidates for sainthood.

Otherwise good history sometimes falls prey to poor writing. This is not the case with Black Saint of the Americas. From her introductory vignette of Dominican friars opening Martín de Porres’ grave to her later description of the saint’s 20th-century veneration in the United States, Cussen’s writing engages the reader in a way one would not expect when the topic is the Catholic Church’s canonization bureaucracy. The writing makes this book a joy to read.

Cussen’s marvelous history operates on several levels. It is a superb social history of colonial Lima, especially because the convents and monasteries of the city’s several prestigious religious orders were so deeply integrated into daily life in the imperial city. As in most Iberian colonies, the outward signs and performative language of Catholicism were on daily display in Lima, and so Cussen’s history of Martín de Porres works as a history of Lima, too.

Black Saint of the Americas strikes and maintains a balance between deploying historical and social theory and taking contemporary subjects at their word. Whether readers identify with the cosmology of Cussen’s 17th-century limeños is beside the point: She neither defends nor criticizes the supernatural assumptions of the period but rather writes about a world in which this intellectual apparatus was taken for granted. In this way, her approach to the history of religion respects her subjects and contemporary theologies of devotion.

Readers should not overlook Cussen’s appendices, which are a treasure trove of data related to the investigation into de Porres’ potential sainthood. Graduate students in particular stand to find numerous research topics from these appendices alone, as Cussen has provided extensive lists of witnesses in the beatification process, their religious orders or states of life, why they were chosen, and other details.

While Black Saint of the Americas is remarkable in most aspects, it is unremarkable in that a few areas leave the reader wanting a bit more. One weakness in Cussen’s otherwise robust description of saintly devotion is her section on relics and the uses of Martín de Porres’ earthly remains. She nods to some of the syncretic practices that incorporated Native American spiritualism and Catholic relics, but she downplays the extent to which this represented a potential crisis in the propagation of the faith in colonial South America.

De Porres’ devotees invoked him for many reasons and in many settings, as Cussen amply demonstrates. But the massive emotional, political, and social leap from the saint’s status as a divinely gifted healer to social justice champion is inadequately underpinned: The text moves from 17th-century colonial Lima to 20th-century Selma rather quickly. There are limits to all books, of course, and filling that chronological gap might have taken too many pages for a monograph. Because the weight of the book tilts toward de Porres’ life and early history, however, his latter-day veneration seems slightly shortchanged.

All told, this is an excellent book. Cussen has amassed an enormous wealth of sources from her research in the archives of universities, states, and religious orders on three continents. Black Saint of the Americas offers a first-rate example of how to study religion—in particular, how to study saints as understood by the institutional Catholic Church and by the many devotees to whom the saints are crucial mediators of faith. Cussen demonstrates why any serious study of this subject demands transnational, inter-organizational, and multimedia research.

Black Saint of the Americas is essential reading for historians interested in daily life in colonial Latin America, the history of sainthood in the Catholic Church, and the complex interaction between religion and race in the Americas. By balancing superb writing with nuanced analysis, Cussen has produced an accessible and valuable book for audiences spanning from undergraduate history majors to established scholars.

Michael Skaggs is a Ph.D. candidate at the University of Notre Dame.

This review was originally published in the Spring 2016 issue of the American Catholic Studies Newsletter.