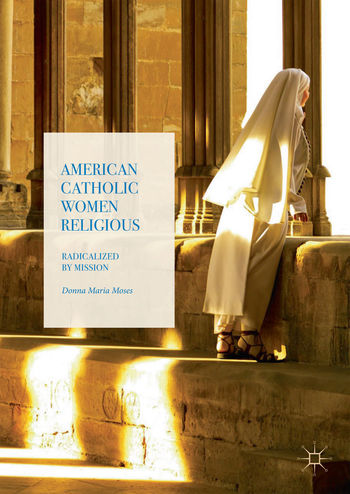 The subject of Donna Maria Moses’ American Catholic Women Religious: Radicalized by Mission is far more specific than the title suggests. Moses, who is a Dominican Sister of Mission San Jose, writes about the 20th-century foreign mission apostolates of the various congregations of U.S. Dominican sisters, including the Maryknoll Sisters of St. Dominic, and situates these ministries within the political and cultural contexts of their era. The result is a book that does more than recount the history of American Dominican women religious and their work outside of the United States; readers will find that it can actually serve as a reference work for those seeking information related to Dominicans and missionary work abroad. Although the sisters are members of U.S. congregations, this study demonstrates that they were women with a vision that transcended boundaries. In fact, this is a story of global history because it traces the itineraries of Dominicans working with those in need throughout the world.

Each chapter covers one decade of the 20th century, and begins with an overview of relevant political, cultural, and religious events of the time period under discussion. Chapter One, for instance, notes the importance of American foreign policy during the aftermath of the Spanish-American War and the Boxer Rebellion in China, and discusses Leo XIII’s attempts to “bolster the political position of the Church by appealing to the working class and developing Catholic political parties that supported reforms in favor of worker rights” (8). After setting the stage, Moses then discusses Dominican missions chronologically within the decade and by the country in which the mission was or is still located. The way in which chapters are organized allows the reader to connect missions in particular countries with the U.S Dominican congregation engaged in that work.

The first 20th-century Dominicans to minister in a country outside of the United States were—and this may surprise many readers—the Dominican Sisters of Mission San Jose (California), who found themselves in need of sisters fluent in German to support their ministry of teaching children who had immigrated to California from Germany. Mother Maria Pia Backes established a novitiate in Altenberg, Germany—the sisters later moved to Altenhohenau—and began the process of forming German sisters for work in the United States. The Mission San Jose Dominicans did not withdraw from Germany until 2014.

Although most of the ministries discussed involve the Maryknoll Sisters of St. Dominic (see below), a number of other congregations in the Dominican Order sent sisters to work outside of the United States. As early as 1901, the Catherine de’ Ricci Dominicans opened an orphanage in Havana for black and mestizo children. Those who study the history of women religious will recognize a familiar pattern in this story. No funds were forthcoming from the Diocese of Havana to support the sisters’ work, leading them to request assistance from the United States. In this case Mother—later Saint—Katharine Drexel agreed to provide funds to assist the sisters in their ministry. The sisters continually tried to convince wealthy Cuban Catholics to provide financial assistance for the orphanage, but had very little success.

The length and work of the missions established by American Dominican sisters vary, and some play a more important role in the story than others. The Sparkill Dominicans’ mission in Pakistan, for instance, was established in 1958 and remains open today, “providing education and outreach to the poor in Bahawalpur, Loretto, and Multan” (106). Women religious in the United States often established schools for the wealthy at the same time that they founded free schools for children who could not afford tuition at a private academy. The Sparkill Dominicans in Pakistan did the same. The sisters taught in Urdu at their schools for the poor while also running English-medium schools to educate British children living in India. Money they received from operating the English-medium schools was used to finance the schools for children unable to pay tuition. The history of the Sparkill Dominicans in Pakistan is worthy of further study because of their place in the story of political unrest in that country, as well as their work involving relations between Christians and Muslims in a predominantly non-Christian country.

Much of the volume centers on the work of the Maryknoll Sisters. Although some parts of their story—the murder of two sisters, along with a lay missioner and an Ursuline sister, in El Salvador in 1982, for instance—are well known, others have received little scholarly attention to date. The Maryknoll mission in Thailand, for instance, began in 1967. Moses deftly explains the relationship between the American sisters and the Lovers of the Cross Sisters, and notes that in 1990 two Maryknoll sisters began a cloister in Thailand to pray for the “mission of the Lovers of the Holy Cross Sisters” (124). At times, Maryknoll sisters and members of another Dominican congregation are both working in the same country—Vietnam, for example—and both congregations are treated in the same section. In the case of Vietnam, Maryknoll sisters first arrived in that country in 1968 to work with Catholic Relief Services; this mission ended in 1970. At present, some individual Dominican Sisters of Peace (a new congregation composed of several Dominican communities) are working with the Vietnamese Dominican Sisters of Thai Binh (Peace). Telling the story in this way serves to remind the reader that more than one congregation—Dominican or otherwise—often ministered in any given country. A logical future extension to Moses’ history would be an examination of what sort of communication took place between the various congregations, if indeed there was any at all.

The discussions of political, religious, and cultural history that open each chapter include, when appropriate, the ways in which congregations of Dominican sisters—and most women religious—responded to events and developments taking place in the larger society. Chapter Six, “Liberation Movements and Theology (1960–1970),” includes a discussion of papal documents such as Paul VI’s Populorum Progressio (1967) and the concept of the “preferential option for the poor,” first coined by Jesuit Superior General Pedro Arrupe. Women religious, Moses states, used the teachings found in the encyclical, along with the idea of opting for the poor, to develop a new model used in mission “all over the world” (119). Their work no longer focused solely on evangelization, but was geared toward “bridging ideological gaps and breaking the economic and discriminatory barriers that divided people” (119). This often involved taking positions on issues related to peace and justice, and questioning structures that sustained poverty and injustice.

Readers will find that American Catholic Women Religious will help them to gain a clearer understanding of the larger picture of Dominicans ministering outside of the United States. The story of U.S. Dominican sisters and their ministries in other countries is confusing because there are many different countries, congregations, and ministries that have to be incorporated into the larger picture. Moses’ decision to tell the story chronologically using the ministry’s starting date to determine its placement in the book allows readers to understand how each ministry developed within the context of other events taking place within that particular decade. In addition, each chapter contains a table that informs the reader which countries and congregations will be discussed, and the dates they began (and, if relevant, ended) their missions. Moses makes good use of secondary sources, including congregational newsletters, as well as some previously unexplored archival material. Her bibliographies at the end of each chapter will point readers to further information on many relevant topics. In addition, there are a number of photographs throughout the book that visually represent what is being discussed. A photo in Chapter Four, “Christian Democratization (1940–1950),” depicts Maryknoll Sister Joan Kirsch—in a full habit—with a Tanzanian chief. By the 1980s, Sister Pat Conroy, M.M., is wearing Nepalese dress.

American Catholic Women Religious: Radicalized by Mission is a very readable book that clearly shows the ways in which Dominican sisters ministered to those outside of the United States, as well as how their ministries changed over time to reflect new ways of thinking about mission, preaching the gospel, and helping those in need. This book is really just a first step, though. We now need a comprehensive history of each U.S. Dominican congregation that includes their work as missionaries in other lands.

Margaret McGuinness is professor of religion at LaSalle University.

This book review appears in the spring 2018 issue of the American Catholic Studies Newsletter.