Friends of Cushwa news and notes

Shaun Blanchard (Franciscan Missionaries of Our Lady University) published an article in the summer 2018 issue of the U.S. Catholic Historian, “Neither Cisalpine nor Ultramontane: John Carroll’s Ambivalent Relationship with English Catholicism, 1780–1800.”

Katherine Dugan (Springfield College) announces the release of Millennial Missionaries: How a Group of Young Catholics is Trying to Make Catholicism Cool, published by Oxford University Press in January 2019. Research Travel Grant funds from the Cushwa Center supported archival research that contributed particularly to the book’s first chapter on the history of the Fellowship of Catholic University Students (FOCUS).

Elizabeth Foster (Tufts University) is pleased to announce her new book, African Catholic: Decolonization and the Transformation of the Church, appearing in March 2019 with Harvard University Press.

Theresa Keeley (University of Louisville) has published an article, “Not Above the Fray: Religious and Political Divides’ Impact on U.S. Missionary Sisters in 1980s Nicaragua,” in the Winter 2019 issue of the U.S. Catholic Historian. The article grew out of a paper from the Cushwa Center’s 2017 conference, Too Small a World: Catholic Sisters as Global Missionaries, and was based on research from the Notre Dame Archives using a Cushwa Center Research Travel Grant.

Maximilian Longley (independent scholar; 2018 Hibernian Award recipient) published an article in the fall 2018 issue of the U.S. Catholic Historian, “The Radicalization of James McMaster: The ‘Puritan’ North as an Enemy of Peace, the Constitution, and the Catholic Church.”

Timothy Matovina (University of Notre Dame) has published Theologies of Guadalupe: From the Era of Conquest to Pope Francis with Oxford University Press (2018).

Bronwen McShea (Princeton University) writes to share an update on research supported by the Cushwa Center: “Using funds from the Mother Theodore Guerin Research Travel Grant that I was honored to receive in 2018, I spent several weeks in late November and early December in the city of Valence, France. I was able to consult extensive archival materials in the Archives Départementales de Drôme which relate to the life of Marie-Madeleine de Vignerot, the Duchesse d’Aiguillon (1604–1675), whose biography I am writing. D’Aiguillon, who was Cardinal Richelieu’s niece and heiress, was the patroness of numerous Catholic religious institutions and charities in France. She was also a pioneering figure in the history of the Church’s missionary expansion into North America, Southeast Asia, North Africa, and the Levant. My findings so far suggest that she played a more leaderly role in post-Tridentine, French Catholic ecclesial and political life than we expect to see for a laywoman of the era. I am now back at Princeton making progress with my manuscript, which I hope to see published as my second book.”

Mary Christine Morkovsky, C.D.P., has published Pilgrims in Providence: A History of the Texas Congregation of Divine Providence in Mexico (Xlibris, 2018). The book will appear in English and in Spanish and is the author’s third history of a religious congregation.

Michael Skaggs (Ph.D., University of Notre Dame, 2017) became executive director of the Chaplaincy Innovation Lab, based at Brandeis University, upon its launch in November. This year he will also begin working on the NEH-­funded project “Boston’s Hidden Sacred Spaces,” for which James O’Toole (Boston College) serves as an advisor. Michael has also begun a three-­year term as co-­chair of a new unit in the American Academy of Religion, “Innovation in Chaplaincy and Spiritual Care.” Most importantly, he and his wife, Caroline, welcomed their third child, Jane, in December. 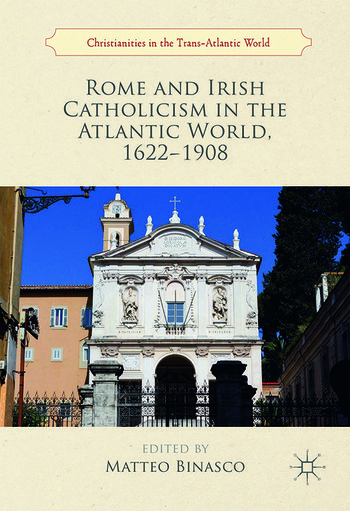 These announcements appear in the spring 2019 issue of the American Catholic Studies Newsletter.