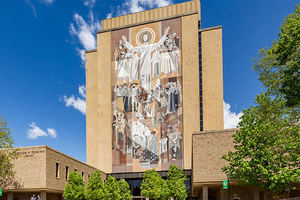 Father Clarence Williams, C.PP.S., Ph.D., will deliver a lecture hosted by the Hesburgh Libraries to mark the 50th anniversary of the founding of the National Black Catholic Clergy Caucus (NBCCC). Father Williams serves as the organization’s archivist. In October 2016, a caucus delegation delivered 21 linear feet of NBCCC records to the University of Notre Dame Archives.

Ordained in 1978, Father Williams was the first black priest ordained in his home diocese of Cleveland, Ohio. A member of the Missionaries of the Precious Blood, he served in the Archdiocese of Detroit for 27 years, first as Pastor of St. Anthony Church, and then as Director of the Office of Black Catholic Ministries. He then moved to Washington, D.C., to serve in the national offices of Catholic Charities as senior director of Racial Equality and Diversity Initiatives. In 2012, he became pastor of St. James the Less in Columbus, Ohio. Presently, he serves on the board of the Association of U.S. Catholic Priests and is director of the Institute for Racial Sobriety. He has served on the Executive Board of “Bread for the World,” and is involved in the support of children orphaned by the AIDS epidemic in Africa and Haiti.

As a communicator, Father Williams has produced seven documentaries which have appeared on NBC, ABC, and cable television. He has received the Christopher Award for Religious Television. His documentary work on the African presence in civilization, the Bible, and the early church has been distributed by the Vatican in English and French. For 25 years in the Archdiocese of Detroit, Father Williams had been a regular celebrant on the TV Mass for Shut-Ins.