The center began operations in 1975 after its first director, Jay P. Dolan, explored the idea with his colleagues in the department of History at the University of Notre Dame. The center received initial funding from the provost and, in 1981, the Charles and Margaret Hall Cushwa family of Youngstown, Ohio, provided the center with a major endowment. Jay Dolan served as director of the Cushwa Center until 1994, when he was succeeded by R. Scott Appleby. Timothy Matovina directed the center from 2002-2012, and Kathleen Sprows Cummings was named director in July 2012. 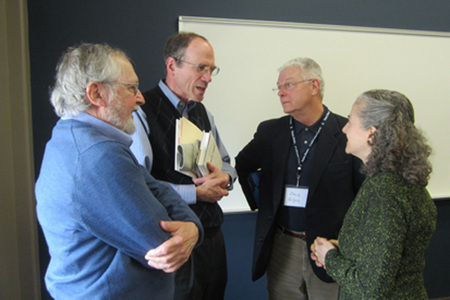 Cushwa Center seminars, conferences, and research projects, many of which produce scholarly volumes or popular educational publications, engage a national body of historians and colleagues from theology, women’s studies, sociology, religious studies, American studies and English. The center also provides resources and critical commentary for media coverage of U.S. Catholicism and collaborates with church leaders and pastoral workers to enhance the vitality of Catholic life in the United States.

To support the development of new initiatives based in Rome, Italy, the Cushwa Center recently inaugurated its Rome Advisory Committee chaired by Luca Codignola, Cushwa's senior fellow in Rome.

In all aspects of its mission — research, teaching and faculty development, and public service — the Cushwa Center seeks interdisciplinary and ecumenical cooperation.

Scholars who need to locate and work with archival materials should contact the University of Notre Dame Archives.