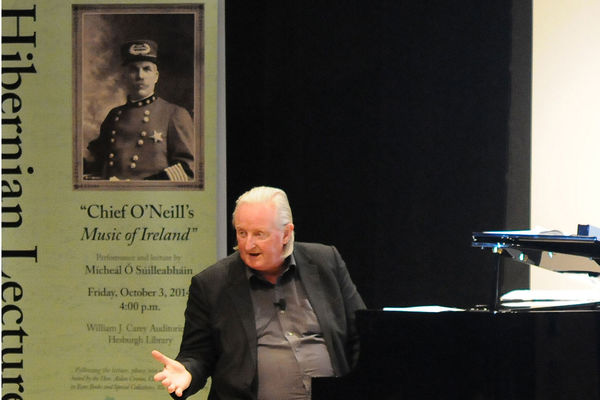 The fall 2014 Hibernian Lecture, held on October 3 in Hesburgh Library’s Carey Auditorium, featured a presentation by acclaimed Irish musician Mícheál Ó Súilleabháin. He spoke about and performed traditional Irish music collected by Francis O’Neill, an Irishman who emigrated to the United States, joined the Chicago Police Department, and served as its superintendent from 1901-1905, all the while pursing his avocation of music collection and preservation.

A pianist, composer, and academic, Ó Súilleabháin founded the Irish World Academy of Music and Dance at the University of Limerick, where he is professor of music. He has released more than 10 CD recordings of his own music and has recorded extensively with the Irish Chamber Orchestra.

After an introduction by Cushwa Center Director Kathleen Sprows Cummings, Ó Súilleabháin thanked the Center for the opportunity to celebrate the life and music of Francis O’Neill, whose vast collection of music and “Hiberniana,” as he called his library of Irish history, was donated to Notre Dame in 1931. Bringing O’Neill’s collection out of past and out of the the library, Ó Súilleabháin said, is a step toward building on its foundation and advancing the fields of Irish music and Irish music studies.

Early in his presentation, Ó Súilleabháin acknowledged two special guests in the audience: Ellen Skerrett, the Chicago historian who delivered the Hibernian Lecture in 2005, and Mary Lesch, O’Neill’s great-granddaughter. Skerrett and Lesch worked together to edit O’Neill’s memoirs, which were published in 2008 as Chief O’Neill’s Sketchy Recollections of an Eventful Life in Chicago (Northwestern University Press), a memoir that Ó Súilleabháin referenced several times during his talk. Lesch brought her great-grandfather’s tin whistle to the lecture and lent it to Ó Súilleabháin for his presentation.

Upon exhibiting the whistle, Ó Súilleabháin exclaimed, “Not a great whistler, but that won’t stop me from trying,” and he whistled a short tune. Ó Súilleabháin then described aspects of O’Neill’s two major music collections, which were published in 1903 and 1907. O’Neill’s 1903 collection, O’Neill’s Music of Ireland, contained 1,850 pieces of music—several of which Ó Súilleabháin played for the audience. He began with #1,825, titled “Bonaparte Crossing the Rhine.” Ó Súilleabháin explained that many of the tunes tunes lack titles, but the titles of tunes that had been named were potentially confusing. “In typical Irish fashion, all of the titles don’t mean what they say,” said Ó Súilleabháin. “It isn’t that you’re supposed to think of Bonaparte crossing the Rhine when you hear this music, it’s really just a way to identify the tune.” While some of the titles came from everyday events (the tune “The Mouse on the Stairs,” for instance, got its name when the musicians heard a scratching sound nearby and one of them discovered a mouse on the stairs) other songs had curious titles, such as “Upstairs in a Tent” and “I Buried My Wife and Danced on Top of Her Grave.”

Ó Súilleabháin then performed some of these lively, intricate tunes on piano. After the audience’s applause, Ó Súilleabháin indicated that O’Neill collected music from traditional whistlers and pipers in and around Chicago, but not from pianists. Because of this, Ó Súilleabháin explained, his performance is a translation of sorts.

Following his first set on the piano, Ó Súilleabháin provided an overview of O’Neill’s life. He was born in West Cork, Tralibane, Ireland, in 1848. “We know how Francis got his music,” said Ó Súilleabháin, who read a section of his memoir that talks about his mother learning traditional music from her father and passing it along to her son, and how Francis’ father would lean back in his chair and sing old songs in Irish and English. “He got the music from the family itself. It wasn’t music lessons or music school—he picked up music the way you pick up your first language. You don’t learn it at school. You learn it at home.”

As a teenager, O’Neill became a cabin boy on a ship, and within four years he had circumnavigated the world. Ó Súilleabháin described O’Neill as a courageous, intelligent, and passionate entrepreneur who was eager to become well-read. Even while on board the ship, he’d buy or trade books whenever he had the opportunity.

O’Neill joined Chicago’s police force in 1873, working his way up the ranks to become superintendent in 1901. According to Ó Súilleabháin, O’Neill possessed a passion for justice and proudly resisted political manipulation during his time on the force.

Throughout his talk, Ó Súilleabháin shared images of O’Neill’s Chicago and the Irish music scene from a book by Nicholas Carolan called A Harvest Saved: Francis O’Neill and Irish Music in Chicago (Music Sales America). One of the images was of James O’Neill (no relation), a friend who was proficient at music notation and worked with Chief O’Neill to record tunes on paper. Ó Súilleabháin stopped to play a few measures on O’Neill’s whistle. “With this whistle, we can imagine Francis with James in his house, playing a tune on it, stopping, playing it again, all while James is writing down the notes.”

“He would constantly talk about music preservation,” said Ó Súilleabháin. In America, O’Neill had seen the Irish language disappear in one generation. “He was nervous the music might disappear, too,” Ó Súilleabháin said. It was during the time O’Neill was on the police force, as Irish immigrants and their descendants grew to become a critical mass in the United States and as Francis O’Neill and James O’Neill were working on notating music, that the spirit of Irish music shifted from Ireland to the United States.

Part of O’Neill’s music preservation strategy, Ó Súilleabháin said, was to write the tunes in a very basic manner, free of ornamentation. “No traditional musician would look at it and play exactly as it was written,” Ó Súilleabháin said. “Writing it down this way allowed musicians to build up a tapestry of choices.” Ó Súilleabháin described music is an intelligence, like math. “Musicians think music when they play music,” he said. “They don’t think about music; all their thinking is done through the body.”

Music notation is like a photograph of a horse, Ó Súilleabháin said; the actual music is like the horse itself, and listeners must not confuse written snapshots of music with real music itself. Music is always moving and developing; music notation captures a single moment in the life of the music.

Ó Súilleabháin began wrapping up his presentation by discussing Francis O’Neill’s legacy. According to Ó Súilleabháin, the fact that O’Neill collected from traditional musicians for traditional musicians set him apart from other collectors of music such as P. W. Joyce and Edward Bunting. His goal was preservation rather than financial gain. As fast as he was collecting and notating music, people were extracting it, playing it, and listening to it.

To the delight of the audience, Ó Súilleabháin concluded his presentation by performing three final pieces—“Banks of the Suir,” “Snowy-Breasted Pearl,” and, on Chief O’Neill’s own whistle, “Chief O’Neill’s Favorite.”

The Cushwa Center collaborated with the Keough-Naughton Institute for Irish Studies, the Hesburgh Libraries, and the Consul General of Ireland in Chicago to bring Ó Súilleabháin to campus on the same day that several other Ireland-related events were taking place, including the acquisition of the papers of Irish author Patrick McCabe, which was made possible with the support of a grant from the University’s Office of Research. Following the lecture, Ó Súilleabháin and McCabe joined audience members for a reception in the Rare Books and Special Collections Room of the Hesburgh Library hosted by the Honorable Aidan Cronin, Consul General of Ireland.

For more on our Fall Events, see the Spring 2015 American Catholic Studies Newsletter.