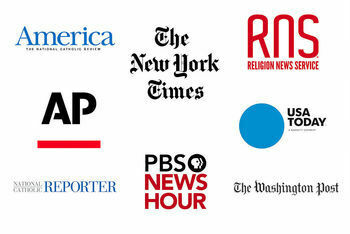 Part of the Cushwa Center's mission is to provide the media with resources, critical commentary, and expertise about the Catholic Church in the United States.

Members of the media are encouraged to contact the center with inquiries or interview requests.

Recent media appearances, quotes, and commentary from the center's faculty and fellows include:

"A Saint of Our Own: How the Quest for a Holy Hero Helped Catholics Become American": An Interview with Kathleen Sprows Cummings
New Books in Catholic Studies
December 17, 2022

Legacy lives on of cardinal who helped name the pope
Angelus
July 12, 2022

9/11's first casualty Mychal Judge is a legent—can he be a saint?
NorthJersey.com
September 10, 2021

Biden and abortion could change the bishops’ culture of consensus at next week’s USCCB meeting
America
June 10, 2021

In Venezuela, a quest for sainthood offers proof of miracles
National Geographic
May 3, 2021

Biden and the bishops: still trying to figure each other out
La Croix
April 28, 2021

The bishops were divided on how to approach Joe Biden. It's not the first time a dispute has gone public.
America
February 16, 2021

Opinion: Why L.A.’s archbishop might have been passed over for a cardinal’s hat
Los Angeles Times
October 26, 2020

A saint for our times: This man would be a relevant, revolutionary choice
National Catholic Reporter
June 20, 2020

As Mass attendance in Philly declines, Archbishop Chaput’s successor must be more pastoral than polarizing

Expectations high for Pope Francis' sex-abuse summit, but some brace for disappointment

In the American quest for a home-grown saint, faith and identity collide
U.S. Catholic
February 11, 2019

In major shift, lay Catholics are organizing to push bishops on reform. And sometimes priests join in.
Washington Post
December 21, 2018

McAuley's legacy: Sisters of Mercy of the Americas celebrate 175 years in US
Global Sisters Report
December 20, 2018

Beyond Georgetown: Exploring The Influence of The Catholic Church On D.C.
WAMU 88.5
December 19, 2018

The Sex-Abuse Scandal Is Growing Faster Than the Church Can Contain It
The Atlantic
September 14, 2018

Clericalism: The culture that enables abuse and insists on hiding it
Catholic News Service
August 22, 2018

Pope on sex abuse: 'We showed no care for the little ones'

Pope Francis: ‘No effort must be spared’ to prevent Catholic Church abuses

Critics say pope's comments are both 'bold' and 'too little, too late'
Religion News Service
August 20, 2018

For Catholics, Gradual Reform is No Longer an Option
New York Times
August 17, 2018

The Oklahoma priest who could become the first American-born man to be canonized a saint
Washington Post
September 21, 2017

Study of women deacons won't be first, but might answer questions
Catholic News Service
May 17, 2016

The pope forms commission to study concept of women deacons
FOX News
May. 13, 2016

New study: Number of US women religious about the same as a century ago
Global Sisters Report
December 9, 2015

The inevitable question for women: To stay or go?
National Catholic Reporter
December 3, 2015

Global Audience Turns to VOA Ahead of Pope Francis US Tour
Voice of America
September 22, 2015

Pope Francis’ address to US bishops could be consequential
Crux
September 16, 2015

Canonization ceremony by pope will be a first for U.S., and it's a controversial one
Los Angeles Times
September 11, 2015

Is the Pope's challenge to America having an anti-Francis effect?
Catholic News Agency
July 24, 2015

Women lead in the Church, even as Catholics debate their role
Crux.com
January 15, 2015

Woman Risks Excommunication to Be Ordained
South Bend Tribune
May 31, 2014

Spiritual and Secular Mix in Case for Sainthood
New York Times
May 30, 2014

‘The people’s Pope’ not afraid of clowning around
TODAY
November 10, 2013

Pope Francis proves to be a pontiff of surprises
Boston Globe
July 27, 2013

It's time for Pope Francis to give women a bigger role in the church
New York Daily News
March 16, 2013

Can pope bridge gap between America and Rome?
CNN
March 15, 2013

In a hurry to take things slowly: How Italian culture could shape the conclave
NBC Nightly News
March 12, 2013

Pondering a pope and the gender divide
Boston Globe
March 10, 2013

What women theologians have done for the church
U.S. Catholic
January 2013