On October 7, 2015, the Cushwa Center hosted the American Catholic Studies Symposium, titled “Hispanic Catholics in 21st-Century Parish Life.” The conversation considered the findings of the recent National Study of Catholic Parishes with Hispanic Ministry, designed and led by the Boston College School of Theology and Ministry in collaboration with the Center for Applied Research in the Apostolate (CARA) at Georgetown University.

This event was part of a series celebrating the Cushwa Center’s 40th anniversary and paid tribute to Timothy Matovina’s scholarship and leadership in American Catholic studies, especially in the field of Latino Catholicism. Matovina, who attended the symposium, directed the Cushwa Center from 2002-2012 and is currently co-director of the Institute for Latino Studies and professor of theology at the University of Notre Dame. 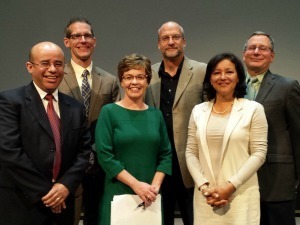 Keynote speaker Hosffman Ospino, assistant professor of Hispanic ministry at the Boston College School of Theology and Ministry and principal investigator for the study, delivered remarks on the study’s findings. Three respondents each focused on a section of his remarks. Edward Hahnenberg holds the Jack and Mary Jane Breen Chair in Catholic Systematic Theology at John Carroll University; Christian Smith is the William R. Kenan, Jr. Professor of Sociology and director of the Center for the Study of Religion and Society at the University of Notre Dame; and Dora Tobar is director of the Diocese of Lafayette-in-Indiana’s Pastoral Office for Family Life and Hispanic Ministry.

Ospino began with words of thanks for the opportunity to discuss the study and to honor Matovina. “Professor Matovina’s passion for Hispanic Catholic life and his contributions through research, publications, and service are invaluable,” Ospino said. In particular, he praised Matovina’s book Latino Catholicism: Transformation in America’s Largest Church (Princeton, 2011) as “a jewel, bound to become a classic,” and thanked Matovina for his friendship and mentorship.

Ospino introduced his remarks about the study by stating that if Hispanic theology aims to remain relevant and faithful to its principles, “it must pay attention to where Hispanics are
and where Hispanics actualize their faith.” He acknowledged that over the past 40 years researchers of Latino Catholicism in the United States have focused on frameworks such as lived reality, culture, gender, social location, and suffering, and these have been fruitful areas of discussion. However, the role of the parish in the experience of U.S. Hispanic Catholics has been largely overlooked, and this study aimed to fill that void. The findings show that an estimated 7 million Hispanic Catholics in the United States—about 20 percent of the Hispanic Catholic population in the United States—attend Mass on a weekly basis. Another 20 to 30 percent attend less regularly but are still connected to parish life.

“Parishes are not the only locus where the Hispanic Catholic experience unfolds, yet parish life remains a strong referent for communal life and faith among Hispanic Catholics in this country,” Ospino said, calling the parish “the most tangible context that brings together many facets of this group’s religious experience.”

Ospino said the many questions raised by the study’s findings can be distilled into one main question: “What kind of church are we building as Catholicism in the United States becomes increasingly shaped by Hispanics?” The ecclesiological implications for how the contemporary U.S. Catholic experience is being reshaped, Ospino said, are particularly fascinating.

In light of the study’s findings, Ospino articulated three areas for potential growth: first, what he called “a historical turn,” or an opportunity to uncover, recover, and rewrite aspects of American Catholic history so that it is more accurately inclusive. Second, an “ecclesiological turn” has already been decades in the making, Ospino said, but needs further development. This turn will allow new theological categories to be created and existing categories to be refined through careful observation and analysis of the parish experience of Hispanic Catholics. Finally Ospino spoke of a “pastoral turn,” pointing out that 60 percent of U.S. Catholics under the age of 18 are Hispanic, but “still, many parishes, dioceses, and Catholic institutions across the country lag appallingly behind in engagement and service to this group.”

Ospino cited a 2009 study by Roger Haight, S.J., and James Nieman on the dynamic relationship between ecclesiology and congregational studies, and suggested that those reflecting on the findings of the National Study of Catholic Parishes with Hispanic Ministry should take to heart their message. Haight and Nieman propose that ecclesiology and congregational studies must each “remain faithful to its convictions and norms but must also remain open to influencing one another and holding one another accountable.” By balancing boundaries with receptivity, each of the fields can complement the work of the other and defend against simple, unhelpful “proof texting.”

Hahnenberg’s comments focused on the theological aspect of Ospino’s remarks. “Parishes matter,” he said, “But you would never know it by reading the systematic ecclesiology produced by American Catholic theologians over the past 50 years. Even though Catholics in the U.S. live out their faith and encounter their religious tradition primarily in the parish, we theologians have not shown a lot of interest in that.” One reason for that, Hahnenberg suggested, is that the basic unit in Catholic ecclesiology is the diocese, not the parish. That structure developed during between the 4th and 6th centuries, and was championed in the documents of Vatican II. “This patristic conception of church and ministry survived as a powerful ideal, even if it was rarely, if ever, enacted in the concrete,” he said.

“What appeals to me about the ecclesiological turn that Hosffman proposes is the openness to surprises,” Hahnenberg said. For instance, how do normative theological constructions
match up with the on-the-ground reality? Are theologians really listening to the voices of the people? Hahnenberg called that kind of careful listening “so necessary for moving Catholic ecclesiology forward into the 21st century.”

Christian Smith began his remarks by affirming the “serious research on [this] important topic,” and calling the report “a real pleasure to read.” But he raised two sociological concerns about the study. First, he noted the report’s survey response rate and the possibility of non-response biases may have provided a non-representative sample. The response rates ranged from a high of 55 percent among diocesan directors of Hispanic ministry to a low of 10 percent of directors of religious education. Only 13 percent of pastors and 11 percent of parish directors of Hispanic ministry responded. Smith said those low numbers may or may not be a problem, and there’s no real way to know. If those who completed the survey were different in some way related to the topics that this survey addressed—parish size or concern with Hispanic ministry, for example—it could be correlated to the likelihood of completing the survey.

This methodological concern, however, was not a critique of Ospino or the study: “Response rates and their problems are not a reflection of researchers, but of the respondents and their lack of cooperation,” Smith said. He also emphasized that this concern did not undermine the value of the report. “Even if there are problems with the sample, the conclusions of the report are not in trouble—they only more desperately need to be heard.”

Smith’s second point concerned the scarcity of material and personnel resources in the U.S. Catholic Church. “American Catholics as a whole are the worst religious givers of any Christian religious group in the United Sates,” Smith said, indicating that to understand the challenges the church faces in properly ministering to its members, particularly its Latino members, “you should follow the money—or lack thereof.”

“That lack of giving is one crucial reason why U.S. Catholicism, sociologically speaking, is a fairly weak and vulnerable institution in my view. If the American Catholic Church wants to do better than just limp along with an inadequate patchwork of ministries, the church must tackle head-on the question and problem of stingy or generous voluntary financial giving by the people of God.”

Smith concluded his comments by saying that the report makes absolutely clear that providing Hispanic ministries in parishes around the country is necessary, and that they need to be provided in a participatory community way rather than in a top-down way. Additionally, he said, “A host of other ministries will depend, in the long run, upon a transformation of the way American Catholics think about and participate in voluntary financial giving.”

Dora Tobar presented the final comments, focusing on the “pastoral turn” that Ospino raised in his remarks, especially how the findings of this study can help to build a pastoral plan at a
diocesan and parish level. Tobar began by saying that “knowing reality in a precise and objective way is a basic step in knowing and understanding God’s will,” and she called this report “a well-structured invitation to open our eyes and ears and perceive the people’s cries in this country, at this particular moment of history.” She also emphasized the importance of sharing the findings of this study within communities before any pastoral
action takes place. “Once the conversion to reality happens,” she said, “we might be more docile to God’s salvific action and able to cooperate with it.”

Tobar shared her personal observation that there are two Catholic communities in the United States: one established, primarily with European background and English language, and the other, not fully established, primarily with Latin American background and Spanish language. “Both communities are more or less the same size, but operate with different budgets, ministerial resources, and pastoral conditions,” she said. She pointed to the fact that more than one in five diocesan directors of Hispanic ministry are not paid for the work they do in this position.

The lack of parity in resources between the two groups combined with different needs—the established group is shrinking while the newer group is growing—illustrates the challenges for both groups: one group looking for a new path and a way to bring back those who leave the church, and the other group looking for a comfortable, culturally sensitive space where they can worship. Both groups, she says, are experiencing deep inner transformation.

One pastoral challenge that both groups face (although their reasons may be different) is the absence of adolescents from their ranks. Tobar concluded by sharing her hope for the Church to empower both Hispanic and Anglo youth with the leadership formation needed “to be an inclusive and merciful version of the 21st century Catholic Church.” She also addressed the complexities of ministering to a multi-generational Latino population that is at different stages of assimilation. Children of first-generation immigrants are growing up between the “old” culture” of their parents and the “new” American mainstream. “They often have great difficulty determining their own identity and feeling accepted by and integrated with their Anglo peers,” Tobar said. At the same time, their parents are experiencing a loss of parental leadership because their children might not speak the same language or might feel ashamed of their cultural background, leading to a profound stress on the family structure. “Statistics
don’t tell us about all that suffering,” she said, yet it is a key factor in how the faith is passed on to younger generations.

Video of the full symposium