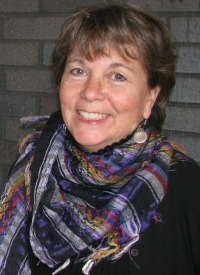 Rebecca Berru Davis is one of nearly 50 scholars presenting research at the upcoming Conference on the History of Women Religious (HWR), a triennial gathering that runs from June 26-29 at Santa Clara University. Davis studies women artists of the early Liturgical Movement in the United States, from 1932 to 1962. She just completed two years at St. John’s University in Collegeville, Minnesota, where she was a Louisville Institute Postdoctoral Fellow. At HWR she will present a talk about Sister Helene O’Connor, O.P., titled “Liturgical Art: An Apostolate and Pedagogy For Artists and Educators.” She recently spoke with Heather Grennan Gary about her work.

First, tell us how you became interested in women artists of the Liturgical Movement.

My research emerged out of my interest in art, spirituality, and worship. When I was beginning my dissertation at the Graduate Theological Union in Berkeley, I was inspired to focus on women artists after reading Teresa Berger’s book Women’s Way of Worship: Gender Analysis and Liturgical History. She wrote that the “silence” that exists about women’s contributions within the historical record perpetuates the belief that women were of little relevance in the Liturgical Movement. So I turned to Liturgical Arts, a journal that was published in the United States between 1932 and 1972, that documented the ferment that existed among architects, artists, and liturgical designers, particularly in the decades immediately before Vatican II. I examined each volume and systematically recorded evidence of women artists, writers, and scholars—establishing that, in fact, numerous women artists were very much engaged in the Liturgical Movement.

In the end, my dissertation focused on three women: Euphemia Charlton Fortune, Ade Bethune, and Sister Helene O’Connor, O.P. I chose them because their artistic contributions were integral to the early 20th-century Liturgical Movement in the United States, and because they represent the diversity of women liturgical artists of this period—lay and religious, formally and informally trained, urban and rural, and working in a variety of media, including painting, sculpture, stained glass, illustration, liturgical design, and education.

By recovering the work they did, the questions they asked, the obstacles they encountered and how those challenges were navigated, we can address the silence that Berger calls attention to.

A few years ago you received a Research Travel Grant from the Cushwa Center to support your visit to the Notre Dame Archives. What did you find here?

I came to the Notre Dame Archives to look at the Liturgical Arts Society Records and the Papers of Maurice Lavanoux, the editor of Liturgical Arts. I found numerous letters from women—both artists and subscribers—as well as photos of artwork, newspaper clippings, and exhibition announcements. All of this helped build the case that many women participated in the lively conversation going on among artists and architects throughout the United States.

Where else have you done archival research?

So far I’ve visited 20 archives from California to Rhode Island, including those of art museums, Catholic dioceses, congregations, and universities. During my time at St. John’s, I had access to the Abbey Archives, Frank Kacmarcik’s Arca Artium Collection at the Hill Museum & Manuscript Collection, and the Archives of the Sisters of St. Benedict’s Monastery. I continue to find treasures in these depositories! However, it was my initial research at the Notre Dame Archives that was the foundation to my project. The resources there were central and helped me to be attentive to what I subsequently found in other archives.

Can you tell us about the photo you will present at the Conference on the History of Women Religious? Why did you choose it? 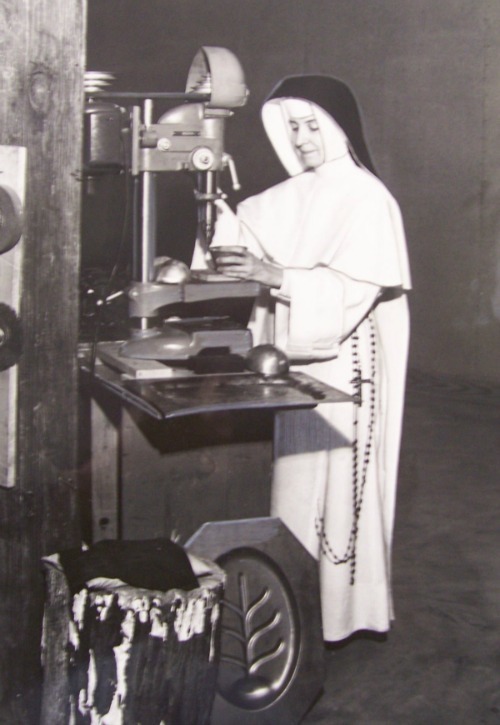 The photo shows Sister Helene O’Connor, O.P., giving an art demonstration at Holy Cross College in Worcester, Massachusetts. It was printed in the May 18, 1956 issue of the Universe Bulletin, the newspaper of the Diocese of Cleveland. I discovered it while working in the Adrian Dominican Archives, in Adrian, Michigan. The original caption says O’Connor is “a sculptor, metalworker, landscape architect, jewelry designer, machinist, photographer, painter and interior and exterior designer” and that “she holds cards in the Stonemasons and Decorators unions” in addition to directing Studio Angelico, a nonprofit art center in Adrian that produces designs for architects and builders.

I chose this image because it shows how multi-talented O’Connor was, and because it shows one way an artist who belonged to a women’s religious community helped to advance the Liturgical Movement. For 30 years, O’Connor could be found perched on scaffolding or brandishing a welding torch, drill press, or pneumatic chisel. She designed and executed numerous church-related commissions, both as a solo artist and in collaboration with others.

O’Connor studied art at the Art Institute in Chicago and the British Academy in Rome. She was the first religious sister to earn a Master in Fine Art from Cranbrook Academy of Art in Michigan. She chaired the art department, taught courses, and directed workshops at Siena Heights College in Adrian. And all along, her community provided supported for her teaching, which was creative and innovative for her time. She held leadership roles in the Catholic Art Association, the National Catholic Rural Life Conference, and the Association of American College’s Commission for the Arts.

Finally, O’Connor often spoke about the arts to various audiences. She was convinced that art education within a Catholic setting was a means of improving the quality of liturgical art and an apostolate worth pursuing.

O’Connor died in 1992 at the age of 83, and her work has been exhibited at the Portland Museum of Art, the Toledo Museum of Art, the Detroit Institute of Art, and the New York Metropolitan Museum. Many of the liturgical commissions she carried out were undertaken in collaboration with the students she trained and inspired.

What would you most like for people to know about O’Connor and the other women artists of the Liturgical Movement?

The lives of these women illustrate that within their individual circles, they were distinct agents of influence and change. They believed that art made a difference to the experience of worship. Recovering lost women from oblivion and inserting them into the historical record is a contribution, but it’s not enough. Further interpretation and reconstruction must continue to reconceptualize the narrative.

What do you think these artists can teach Catholics today?

As artists they took seriously theological precepts, drew on the rich visual tradition of the Church, integrated liturgical principles, and were attentive to ecclesial guidelines in shaping spaces of worship. Their work was an expression of their faith and grounded in their spirituality, and that fundamentally sustained and inspired them.

Also, they didn’t just see themselves as “expert “designers or artists, but as educators. In their role as liturgical artists and designers, they were committed to educating parish communities, clergy, seminarians, architect collaborators, and other emerging artists. They were astute in navigating the challenges inherent in the ecclesial world at the time with prudence and grace while retaining integrity and adhering to their convictions regarding liturgical space. They were skilled at networking and building relationships with organizations, supportive clergy, and others who promoted liturgical art and architecture.

What’s next for you?

I’m currently working on additional articles about particular women artists. Also, with the research I conducted at Notre Dame, I contributed to the exhibition catalogue for an upcoming exhibit that will feature the work of E. Charlton Fortune, one of the women artists in my dissertation. The exhibition will open in August of 2017 at the Crocker Museum in Sacramento.

The Conference on the History of Women Religious