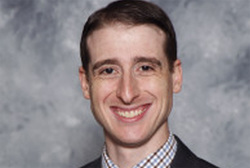 William S. Cossen holds a Ph.D. in history from Pennsylvania State University and teaches history at the Gwinnett School of Mathematics, Science, and Technology in Lawrenceville, Georgia. He received a Research Travel Grant from the Cushwa Center in 2019. This is his second travel grant from the Cushwa Center. His first supported research for his dissertation in 2013. This summer, Peter Cajka sat down with Cossen during his visit to campus to learn more about his research at the Notre Dame Archives.

Peter Cajka: How did you become interested in the lived religious experiences of Catholic Civil War soldiers?

William Cossen: My main field of research has always been American Catholicism, but my interest in soldiers’ lived religious experiences is much more recent. While researching at the Notre Dame Archives in 2013 for my dissertation, I studied the diary of Peter Paul Cooney, a Catholic priest who served as a Union chaplain during the Civil War. I was interested primarily in his and other Catholics’ interactions with Protestants, one of the dissertation’s main themes. I noticed his descriptions of soldiers’ religious practices, but I wasn’t really concerned with them at the time, so I mentally filed them away for future reference.

While doing some more reading in U.S. Catholic historiography on the Civil War, I noticed that many scholars paid little attention to the everyday, spiritual experiences of their subjects. I was curious to learn more since lived Catholicism has otherwise become such an important line of inquiry in the larger field of Catholic studies. I remembered the Cooney diary, and since I had recently moved to Atlanta, I decided to pay a visit to Emory University’s special collections in late 2016 to see if they had any similar holdings. One of the items at Emory, a diary by Thomas Stuart Birch, a young member of Company D of the Second Iowa Infantry Regiment, described a post-battle burial of dead soldiers. Birch noted that he found “a catholick mass book” in the pocket of one of these soldiers. This was the only reference to Catholicism in this particular collection, but the more I thought about it in connection with similar references in Cooney’s diary, the more I realized that I knew very little about the day-to-day spiritual practices of Catholic soldiers of the period. This encouraged me to investigate more.

WC: Certain devotions were shared with the home front. For many Catholic soldiers, sacramentalism suffused their wartime service from beginning to end. They looked to devotional practices such as wearing a scapular or religious medallion, praying the rosary, and using prayer books not only for spiritual sustenance but also for physical protection in the midst of fighting. Soldiers could also attend civil religious ceremonies wherein priests blessed regimental flags and swords.

This is in addition, of course, to soldiers’ reception of the sacraments and participation at Mass. Group absolutions occurred on multiple occasions, and hours-long, marathon confessions became routine, especially on the eve of battles. I found evidence of at least one instance of a group confirmation of possibly thousands of members of the Corcoran Legion conferred by New York Archbishop John Hughes. Reception of communion and anointing of the sick were of special importance, but as with the other sacraments, they were often improvised due to the exigencies of battle and a general shortage of Catholic priests, the latter of which was a difficulty often shared with home-front Catholics for much of the first half of the 19th century.

PC: Scholars of the Civil War and Catholicism have written books on numerous topics, but have largely neglected what you call “the everyday spiritual practices of Catholic soldiers.” Why do you think that is? How will filling this gap shape our understanding of Civil War Catholicism?

WC: I’ve wondered the same thing for some time. This is certainly a valuable body of literature. Scholarship by historians such as David Gleeson, Ryan Keating, William Kurtz, Randall Miller, and Susannah Ural has had a formative role in shaping my thinking on U.S. Catholicism in this period, but much of the extant literature focuses on nationalism and ethnicity. I think this is partly because these two themes have largely dominated the historiography of American Catholicism for decades. The contested meanings of what it means to be American and what it means to be Catholic have been preoccupations of historians of U.S. Catholicism for many years, and I anticipate that remaining the case years from now. My first book project, which I am presently revising from my dissertation, is part of this scholarly conversation. At the same time, the concept of lived religion has continued to gain prominence in recent years, and I see my work on lived Civil War Catholicism as an opportunity to join together these two bodies of scholarship.

Much of the rest of Civil War scholarship dealing with religion unfortunately continues to neglect Catholicism. Numerous monographs on wartime religion leave Catholics virtually absent from the narrative. Catholics are typically treated as peripheral characters of only secondary importance to the Protestants who collectively formed the majority of the armies. This relegation of American Catholics to “the margins” of the past, as historian Leslie Woodcock Tentler has termed it, is surprising since Catholicism was, at mid-century, well on its way to becoming the country’s largest denomination, if it had not already arrived there.

Our understanding of the larger lived religious experience of the war, then, is incomplete without accounting for Catholics and Catholicism. My work is not meant to overturn previous scholarship dealing with, on the one hand, Catholics and their place in the American nation or, on the other hand, with the religious dimensions of the war, but is rather meant to enrich them and add further layers of nuance and complexity to the lives of Catholic soldiers as individuals and not only as members of a religious institution striving for collective acceptance.

PC: What is the connection between studying the spiritual lives of these soldiers and the physical environment? How can the study of religion help scholars move towards an environmental history of the Civil War?

WC: The emerging scholarship on the environmental history of the war is fantastic. I’m thinking here of works by Lisa Brady and Kathryn Shively Meier, among others. Religion, though, has been largely absent from this literature. Wartime Catholicism offers a striking example of how soldiers blended their spiritual lives with the natural environment and with the world of the senses to both naturalize their Catholic faith and to Catholicize nature. Weather and climate had effects not only on military campaigns but also on what I term “the landscape of wartime spirituality.” 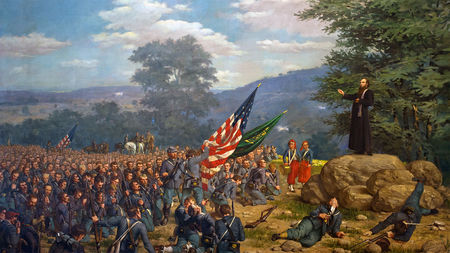 Paul Wood's Absolution under Fire at the Snite Museum of Art

Although the natural environment could sometimes interfere with the usual form of Catholic worship and administration of the sacraments, it could also heighten Catholic soldiers’ religious experiences. As an example, a member of the Irish Brigade at Gettysburg described chaplain William Corby’s famous general absolution at the battle in terms that melded spirituality with nature. Forty years after the battle, he indicated retrospectively that he was not disturbed by the sounds of the nearby fighting, which, instead of disrupting the absolution, “swelled and re-echoed through the woods, making music more sublime than ever sounded through cathedral aisles. The act seemed to be in harmony with all the surroundings.” Peter Paul Cooney felt similarly that soldiers benefited from outdoor worship, largely because they experienced nature more intimately, with “nothing covered but the altar, the shade of the trees nearly shutting out the view of heaven’s vault, and the song of the forest birds alone preventing universal silence while the sacred victim is being offered to the God of heaven for the sins of men especially those present,” which perhaps also gestured to the premium placed on Catholic soldiers’ sacramental Good Deaths, even during Mass. I would argue that for some Catholic soldiers, the natural environment coincided with the religious world. They didn’t merely worship and receive the sacraments outdoors. Instead, nature itself became an integral component of their lived religious experiences. In very real ways for these soldiers, their worship and the natural environment consecrated one another. As the soldiers received the sacraments in natural environments, they drew closer to God, and by doing so, the land itself became holier.

PC: How do you weigh theological ideas against the physical realities of war in studying a “good” Catholic death?

WC: The same Birch diary that encouraged me to pursue this research also led me in the direction of researching Catholics’ conceptions of the Civil War Good Death, since the soldier in whose pocket he found a mass book may have perished without one. I’m sure I’m not alone among Civil War scholars in being a big fan of Drew Gilpin Faust’s This Republic of Suffering. It’s a magnificent book. I still find it incredible, though, that, as with many other books on the war, Catholics are effectively invisible in it, especially when so many of the lived religious experiences of Catholic soldiers, chaplains, and sisters revolved around the realization of a Good Death, whether on the battlefield or in a hospital. Each pre-engagement general absolution conferred by Catholic chaplains on men in their units; each deathbed conversion and baptism; each instance of Catholic soldiers receiving the last rites of their church—all of these sacramental rituals were integral components of a Catholic soldier’s Good Death and occurred with frequency throughout the war.

For many Catholic soldiers and especially for their chaplains, it seems clear that dying heroically for their country or comrades was not enough. Instead, serving loyally and remaining in good sacramental standing with their church were the two necessary components of the Catholic Good Death. This was obviously difficult given the frequently sudden deaths of soldiers, whether on the battlefield, in hospitals, or in prisons. They therefore sometimes had to rely on impromptu absolutions to ensure a Good Death. The situation in prisons was even more fraught for Catholic soldiers. Andersonville, for example, hosted Catholic chaplains such as William John Hamilton, who was forced to “creep on my hands and knees into the holes that the men had burrowed in the ground and stretch myself out alongside of them to hear their confessions.” Such conditions required priests and lay Catholics to live their Catholicism in a far more flexible manner than might be expected in peacetime.

Separating the spiritual and the temporal for Catholic participants in the war was often an impossibility, and this is especially apparent from the perspective of their death practices. Scholars of the Civil War, who have written extensively on death and suffering during the conflict, and scholars of American Catholicism, who have similarly analyzed Catholic death and suffering cultures in U.S. history, are seemingly talking past one another, and that’s a divide I’m hoping to bridge with my research.

PC: Tell us about the best source you found in the archives during this trip.

WC: In addition to the valuable wartime correspondence of several chaplains affiliated with Notre Dame, a memoir by John Ireland, Archbishop of Saint Paul, recounting his military service early in his career as a chaplain during the war, is a fantastic source on spirituality and sacramental life among the soldiers that I had not seen previously.