Eladio Bobadilla is a Ph.D. candidate in U.S. history at Duke University. His dissertation is entitled “‘One People Without Borders’: The Chicano Roots of the Immigrants Rights Movement, 1954–1994,” and explores how Mexican Americans, long ambivalent and even opposed to undocumented immigration, came to see themselves and the undocumented as “one people.” He was awarded a 2016 Theodore M. Hesburgh Research Travel Grant to consult Father Hesburgh’s papers related to his work on the Select Commission on Immigration and Refugee Policy.

Catherine Osborne, the Cushwa Center’s postdoctoral fellow, was recently in touch with Eladio about his visit to the Notre Dame Archives. This interview was previously posted at Religion in American History.

EB: My interest in this topic is largely autobiographical. Immigration is part of my story and has shaped me and my worldview since I was a child. My father was, at various points in his life, a bracero, an undocumented immigrant, a permanent resident, and a U.S. citizen. I, too, was undocumented until the age of 19. So questions about immigration—and about shifting and unstable identities—were always part of my experience. Similarly, growing up in Delano, CA, home of the farm labor movement, inspired me to ask questions about the relationship(s) between labor, immigration, capitalism, and social movements.

CO: After spending some time at the archives, what do you see as Father Hesburgh’s relevance to your overall project?

EB: Father Hesburgh possessed a rare set of qualities that are seldom found so neatly packaged in one human being alone: he was compassionate, but he was pragmatic. He had equal measures of moral vision and political will. He was interested in social justice and in rational debate. He could get people who disagreed fundamentally with each other to sit in a room and actually listen to one another, and crucially, to compromise in fruitful ways. Father Hesburgh understood that neither pure isolationism nor fully open borders were sensible or workable positions, and he worked really hard to ensure that what ultimately became policy was both in the national interest and as humane as possible.

CO: What would you still like to know that you weren’t able to answer through the Hesburgh papers? 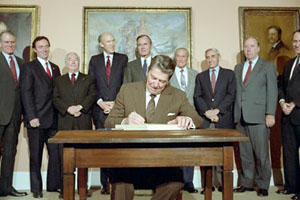 EB: There is so much that archives alone cannot answer. That is why I am interested in oral history. Much of what I found in the Hesburgh archives has led me to ask new questions and to seek answers in other ways. For example, it is clear from my work at the Hesburgh archives that no one was truly happy with the outcome of the Immigration Reform and Control Act of 1986, and I think it’s fair to say that just about everyone has considered it a failure in some way or another. Hispanics thought it was a racist piece of legislation. Business interests felt they weren’t given enough access to labor. Conservative hard-liners thought it was too lenient and permissive. But what about the immigrants themselves, those whose status was normalized by IRCA? What did they think? Well, we don’t really find their voices in the archives. But from talking to them, it seems to me that they would hardly see IRCA as a failure. This piece of legislation changed millions of lives for the better, in tangible and discernible ways: they were able to finally work and live without fear, to sponsor family members—or at the very least to visit them without risking their lives on the return trip. They were able to buy homes, to start businesses. Sometimes even the best archives cannot adequately capture the human experience. This is why I combine oral history and other methods with archival research. Often archives leave researchers with more questions than answers, but that’s not a bad thing. It’s important to know what we don’t know, so to speak, and to find other ways to answer important historical questions.

CO: What’s your favorite document that you found at the Notre Dame Archives?

EB: One of my favorite finds in the archives at Notre Dame was an Air Force manual detailing the processing of Vietnamese refugees. Specifically, the manual outlined how to properly welcome and assist those refugees in the United States. This was an interesting find for a number of reasons. It wasn’t directly related to my research topic, but it allowed me to think—and in some ways challenged me to think—differently about immigration. The manual was a two hundred-plus page document that enthusiastically welcomed Vietnamese refugees fleeing the Vietnam War, and for me, it was a document that clearly and starkly highlighted the complicated nature of immigration policy. At the same time that American officials were trying to limit immigration from Latin America, regularly describing it as a crisis and a social problem, thousands of Vietnamese were being relocated, housed, and provided with jobs and legal status. What this reveals is that immigration has often been, more than an issue in itself, what I call a “filter issue,” one that is really a placeholder for other, broader concerns, from economic anxiety to questions about war and imperialism.

CO: This is obviously a topic with a lot of salience today—maybe more than you could have guessed when you set out to write about it. Do you see today’s American church leaders continuing their role, or is it different? Any lessons today’s Catholic immigrants-rights’ activists could learn from their predecessors?

EB: The Catholic Church and people of faith have a tremendous role to play today in today’s immigration debate. The debate about immigration has, in many ways, devolved into little more than an emotional shouting match. The rhetoric one hears today, even in supposedly reputable sources, is based on dangerous premises that rely less on logic than on ugly, racial undertones. It seems to me that what we’re lacking today is empathy. The dehumanization of people whose status is often reduced to illegality has dangerous precedents in history. This isn’t to say that immigration doesn’t have real consequences for Americans, or that the answer should be simply to open the borders, though I think in reality globalization has already done this. But the stereotypes and scapegoating that we hear in today’s immigration debates are dangerous and frightening to those of us who study history. The Church, I think, has a role in mediating these discussions, just as Father Hesburgh did in the 1980s, and in reminding people of faith there are real human beings, often poor and vulnerable, behind the heated rhetoric—and that they are here because they are desperate and poor, often because of corporate greed and inhumane trade and social policies. In other words, the church can help remind people that the problem isn’t “illegals,” but vast economic interests that create poverty and drive immigration, as well as power-hungry political forces eager to exploit people’s very economic real anxieties and cultural fears. I have been impressed and—putting aside any notion of objectivity—grateful and inspired to hear Pope Francis speak to this issue with tremendous moral clarity and courage. He has repeatedly reminded his flock and the world that human lives and human welfare should always come before profit. That is a remarkably radical and necessary message at a time when capitalist orthodoxy has sought to render compassion obsolete.